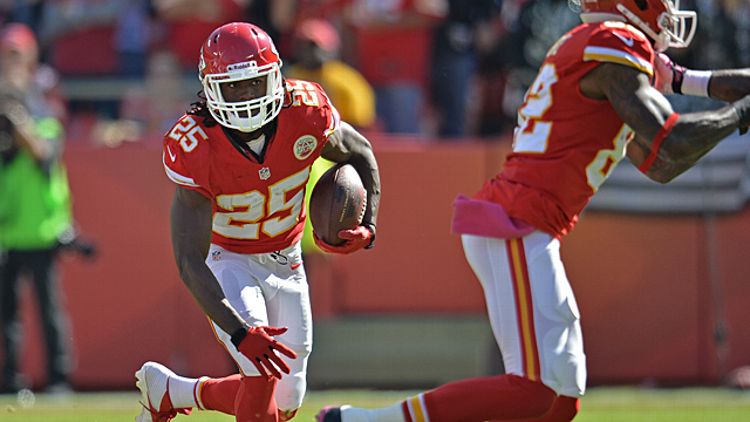 Week 6 was a disaster. I split my four picks, got screwed over by Denver in the first half and — of course — by the Texans, who I was foolish enough to put in a three-team teaser again. I think if Matt Schaub bet on himself as much as I do, he’d cheer his own injuries. And by the way — there are worse examples of fans displaying their insensitivity at public events. What about the people who applaud the dead names during the Academy Awards’ in memoriam montage? Talk about coldhearted!

OK, enough nonsense. The good news is I raised my own debt ceiling and am ready to fire away on some NFL propositions. We’ll worry about how we’re going to get this boat full of jermajesties* to China later.

Somehow, the once-heralded Texans defense is 25th against the run. Coincidentally, this week they face no. 25, Jamaal Charles (sixth in the league in rushing). Freaky, huh? But trust me, this wager is not based on my lack of confidence in Houston’s defense. It’s more of a statement against the offense playing defense while chasing down a pick-six, regardless of who has the unenviable task of playing QB for the Texans this Sunday. I rest my Case Keenum. 20,000 jermajesties

It seems risky to bank on a quarterback who is just learning his team’s system and hasn’t suited up since Walter White was still on the lam. That is, until you consider the Giants’ statistical woes. Big Blue’s pass rush has pulled a disappearing act so impressive it could upstage Criss Angel in Vegas. The Giants are tied for last in points allowed (34.8 per game) and TD passes allowed (14). But more than any of that, I base this pick on the fact that the Sportsish Guy, Bill Simmons, is on a rooting roll. His current flame Russell Wilson has hustled and bustled his team to a 6-1 start. His Red Sox are about to make a historic run after a last-place finish in 2012. His Patriots are back on track after pulling out a miracle win against the Saints. And for some reason, Jalen Rose thinks Simmons is cool. It would only stand to reason that his ex-flame Jaaaaaaaash Freeman lights it up Monday night. 20,000 jermajesties

Cleveland (+7) in the first half over Green Bay

I have a longstanding policy passed on to me by my grandpa George. If Team A has Aaron Rodgers lined up behind center and Team B boasts Fozzy Whittaker as its starting running back, I always choose Team A. That is, unless I’ve stumbled upon a gem of a halftime wager. The Browns are 6-0 against the spread in the first half. 6-0! It says a lot about how they get up for these games. It says even more about how lame Coach Chud’s halftime speeches must be. Take the points. 30,000 jermajesties

Jacksonville (+18.5) over San Diego
Holy crap, did I just put fake money on the rancid Jags? Believe it or not, I saw some life in this team last week against a Broncos squad that looked confused (probably just bored) at times. San Diego is coming off a short week while Jacksonville is coming off a long decade. By keeping it close, the Jaguars will notch their second moral victory in as many weeks.

Atlanta (+3) over Tampa Bay
What happened to the Bucs? Weren’t they supposed to trade for Darrelle Revis in the offseason? They need to do that already to help save 2013. Oh wait. And the Falcons were 7-1 at home last season; if they lose this, they’re looking at 1-7. I don’t see it. The bye week helps them regroup. Steven Jackson, even in a limited role, should make a difference. Something to think about: If you’ve completely shamed yourself and your name is already Mike Smith, what do you change it to?

Denver (+3) over Indianapolis
I’ll let you know when the Broncos are ready to lose. I promise — I won’t forget to tell you. It’s not this week. Too much to prove here for Peyton. He’s been sniffing this game out for 19 months.
30,000 jermajesties

As in … there will be two Thursday night games each week next season. It’s not as outrageous as it sounds. There are discussions about this. I set the odds high only because there’s so much talk about how detrimental these games are to the league, as far as health issues are concerned. Many argue that the short three-day rest could be rectified simply by giving the Thursday teams a bye the previous week. I have to be honest — I used to love the Thursday night game, mostly because it meant one less Sunday early-afternoon game that I had to toggle back to. Eight early games is a disaster for football junkies like me who’d rather sit through a Jonas Brothers intervention than miss a single NFL play. But, looking at the Thursday game from the perspective of one of the country’s most lovable degenerate football gamblers, it is of zero benefit. I can’t remember the last time I had a “good feel” for the Thursday night game. Case in point — yesterday night. I love the Seahawks all year — why not pull the trigger on them against the erratic Cardinals? Probably because in the last two years I’ve undergone enough Thursday thrashings to last three Zsa Zsa Gabor lifetimes. The Thursday nighters are miserable to wager on, and that’s all that should matter in this world. Here’s my solution. Two Sunday night games and two Monday night games. No more injury talk — including the injuries sustained by us husbands when our wives beat us senseless with kitchenware for watching football on Thursdays.

Or any state prison in the south Texas region — take your pick. The Cowboys cut Ratliff earlier this week after the disgruntled and disillusioned defensive tackle made it clear he wasn’t coming back from his injuries anytime soon. He put up impressive career stats with the Boys. One DWI. Several incidents of fighting with team doctors and one in which he supposedly threatened the owner’s life. This guy didn’t bite the hand that fed him. He devoured the entire arm. He’s like a less-likable real-life version of Kenny Powers. Ratliff already cost the Cowboys $18 million in guaranteed money and almost $7 million against the 2014 cap. If I’m Jerry Jones, I reserve a spot on the giant scoreboard where a Jay Ratliff hologram does a permanent twerk right in Terrell Owens’s hologrammed face.

Let’s take a minute to sort this out. Irsay said he was disappointed the Colts didn’t win more Super Bowls with Manning. And why wouldn’t he be? I’m disappointed they didn’t win more, and I couldn’t care less about the Colts. The comment seems fairly innocuous. I’m sure most people feel the same way. All the greatness Peyton Manning brought and surrounded himself with — seems a shame he only brought home the Lombardi Trophy once. That’s how I break it down and I’m not even paying the guy. Irsay is still vilified by some for letting Manning go — a complete no-brainer decision. Saving tens of millions of dollars by saying good-bye to a guy who underwent four neck surgeries is a sound business decision, regardless of what Manning does in Denver. Unless he throws for seven touchdowns Sunday night. In which case, I’ll change my opinion completely.

Even odds Cleveland Browns fans pool together funds to pay Ndamukong Suh $31,500 fine for his hit on Brandon Weeden

This is Suh’s seventh fine. You know when football players say they love the game so much they’d play for free? Ndamukong Suh is the only one who means it.

Over/under 2.5 Americans aside from me whose fantasy football matchup was negatively affected by Philip Rivers’s kneeldown on the final play of the game versus the Colts on Monday night.

This week I was in a neck-and-neck fantasy battle with aptly named Team Poetic Justice in the high-stakes league I joined with strangers after my so-called friends kicked me out of my other fantasy league. Fast-forward to Monday night, when I have the slimmest of leads — 59.39-59.38 — heading into the Chargers’ last drive. The last play of the game saw my quarterback, Philip Rivers, take a knee for minus-1 yards, pushing me back to a 59.38-59.38 tie. You may wonder what the tiebreaker is. Well, there is no tiebreaker because nobody in their right mind would think there would ever be a tie when the decimals play out to the hundredths! I know this sounds like sour grapes (mainly because that’s exactly what it is), but the backup quarterbacks should always take a knee in the final clock-killing drive. If nothing else, it will save the country a ton on remote-control casualties. At least this American.

Can’t wait to learn how Andrew Luck’s butternut squash with kale consumption compares to Peyton Manning’s at the same point in his career.

@TheCousinSal If you bet $100 on the Jaguars to win straight up, how much money would you possibly win?

Possibly? None. Probably? None. Definitely? None.

@TheCousinSal you killed me last week, do I dare trust you with another dime?

Not sure what you’re referring to with this dime nonsense. I only deal in jermajesties.

Over/under 3.5 masked pedestrians who lost their jobs as a result of this Jimmy Kimmel Live! comedy bit I facilitated in which people put on masks and told off their bosses on National Boss Day

Reason no. 492 why I don’t tattoo my initials onto my arm.