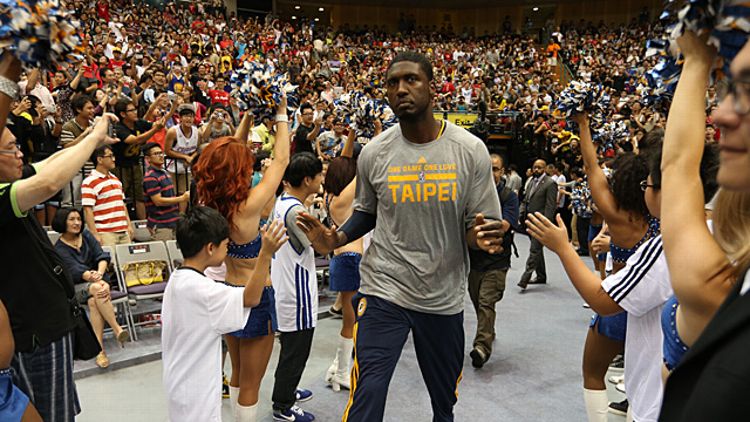 Roy Hibbert is enclosed by a trapezoid-shaped metal bar, flanked on both sides by large black plates that are elevated slightly off the ground by two wood boxes in order to ease the burden on his towering frame. The Pacers’ All-Star center lowers his center of gravity, tightly gripping the faded silver handles on each side of the bar. Hibbert smoothly uncoils from his half-crouched position into a full, towering, upright figure. The bar seems to hang weightlessly near his hips. Hibbert repeats this feat twice more before returning to his starting position. He releases the bar, sending the massive amount of weight onto the wood blocks, which absorb the force with a thunderous crack. Hibbert steps out and takes a couple of long strides to the opposite side of the room. He plops his large frame down between two benches to recover for his next set.

“That’s a P.R. [personal record],” Mike Robertson, his trainer this offseason, yells to Hibbert after double-checking his calculation on the weight. “When you include the bar, that’s 470.”

Hibbert gives Robertson a nod and takes a sip of water.

The idea that Indiana’s Hibbert, already a defensive monster in the paint, was busy setting personal bests in the weight room this offseason should be a scary thought for opposing teams. For much of the summer, four days a week, the Indianapolis Fitness and Sports Training facility was his second home.

Located just off I-69 in Indianapolis, a short drive from Hibbert’s Indiana residence, IFAST is a bit different than your traditional gym. With high ceilings, sliding garage doors, and a general warehouse-like layout, there’s a spartan feel to the facility. There are no TVs, rows of treadmills, or any of the other clutter you’d find in a commercial gym, just the bare essentials collected over time by Robertson, the owner and head trainer. It was a great place for Hibbert to work on the most vital aspect of his game: his body.

For most players, offseason training revolves around improving an aspect of their game. Whether it’s a more reliable jumper, an improved handle, or a better understanding of the pick-and-roll, polishing a skill on the court is the ultimate end goal. Hibbert is different. Though he obviously spent time on his skill work, the former Georgetown big man has made bettering his athleticism his primary focus.

The Pacers’ success is predicated not on Hibbert’s point totals, assists, or even rebounds, but by his presence on the defensive end of the floor. That was never more clear than during Indiana’s surprising playoff run to Game 7 of the Eastern Conference finals last season. The Pacers’ defense was nearly nine points worse when Hibbert was sitting on the bench. And it was that excruciating exit, one win short of the Finals, that has served as a motivator to keep Hibbert in the gym this summer.

“You want to get back to the same place, but there’s a lot of hard work that goes into it,” says Hibbert. “You can’t just fast-forward to Game 7 of the Eastern Conference finals. You have to go out there and earn it.”

Getting back to that point is going to be harder than ever with all the new additions in the Eastern Conference. The Heat have rolled the dice on Greg Oden, while the Knicks have pulled the trigger on a controversial deal for Andrea Bargnani. Derrick Rose is back and healthy for the Bulls, and the Nets have added Kevin Garnett, Paul Pierce, Jason Terry, and Andrei Kirilenko.

“Everyone is getting better,” Hibbert says. “You can’t be where you were last year, you have to be better.”

To take that next step, despite the improved competition, Hibbert needed to continue the six-year journey of overhauling his body that he started as a rookie. He laughs as he recalls his college days, when he couldn’t do a single push-up. It is that type of athletic deficiency that caused scouts to question his potential when he came into the league. It seems crazy now, given his outstanding performance this past spring, but there were concerns that Hibbert was a dinosaur — a slow, plodding big man who wouldn’t be able to keep up with a new, fast-paced NBA. Yet every offseason, Hibbert has made strides to prove these skeptics wrong. Over time, those push-ups that once troubled him are now a staple of his workouts.

It’s easy to watch that video and shrug off the fact that a pro athlete can do something as seemingly basic as a push-up, but Robertson is quick to point out that at 7-foot-2, doing that type of exercise is no simple feat.

“It’s incredibly hard. You gotta think like every inch you add to somebody’s body means more leverage and more body weight to control,” he says. “The analogy I like to use is holding a sledgehammer. If you hold a sledgehammer really close to the end it’s really simple. But the farther you move back, there’s more and more torque on that sledgehammer that you’re trying to control.”

Those push-ups are also representative of a greater theme in Hibbert’s training: stability. It’s often assumed that looking like a Greek god and lifting ridiculous amounts of weight are the end goals for every athlete. Stability isn’t a word that comes up very often in the context of a pro athlete’s training, yet Robertson uses it often when talking about his extraordinarily tall client.

In the strength training world, stability is the annoying friend that hangs out with the more popular duo of strength and power. No one wants to spend time dealing with it, but it’s essential for an athlete trying to control his body properly before lifting massive amounts of weight. Or more specifically in Hibbert’s case, deadlifting 470 pounds three times in a row. Having a stable core to transfer energy is what allows him to do something like that powerfully and safely.

“That’s his foundation,” says Robertson. “You can do all the strength and power stuff and you will improve it to some degree, but you’re ultimately limiting your potential if you don’t build a good foundation first.”

So basically before Hibbert can do something like this:

Robertson has him focusing on consistently doing things not nearly as sexy, like this:

It is those boring, uninspiring exercises that are secretly fueling Hibbert’s improvement as an athlete. By focusing heavily on mobility and stability, Hibbert isn’t just improving his strength and power, he’s lessening the chance of being hit by nagging injuries — assuming he stays diligent with his in-season maintenance lifting.

“It’s not going to be the A-roll when people are looking to make a training video,” says Robertson, when talking about exercises like the ones in the montage above. “It’s the stuff that I know as a performance coach will translate to him moving and feeling better on the court.”

Those types of lifts are certainly the last thing someone would imagine after a picture of Hibbert looking like Godzilla while training with the Spurs duo of Tiago Splitter and Tim Duncan floated around cyberspace earlier this summer. (The big man jokingly called the photo an “optical illusion.”)

But mindlessly lifting otherworldly amounts of weight, while much more fun to watch, write, and talk about, doesn’t properly prepare an athlete for an upcoming season, especially a uniquely tall one — even by NBA standards — in Hibbert. Doing some of the same things that Robertson does even with his everyday clients may seem dull, but it’s actually far more vital to the Pacer big man’s athletic development.

“I don’t want him to do things that look cool in the weight room, but don’t transfer over when he goes out onto the court,” says Robertson.

In the span of a summer, the Eastern Conference has improved immeasurably. Miami remains the unquestioned favorite, but now a few more teams have made moves to make themselves realistic contenders along with Indiana. Internal improvement from Hibbert — along with Paul George, George Hill, and others — is essential if the Pacers want to reach another level as a franchise, and their linchpin knows it.