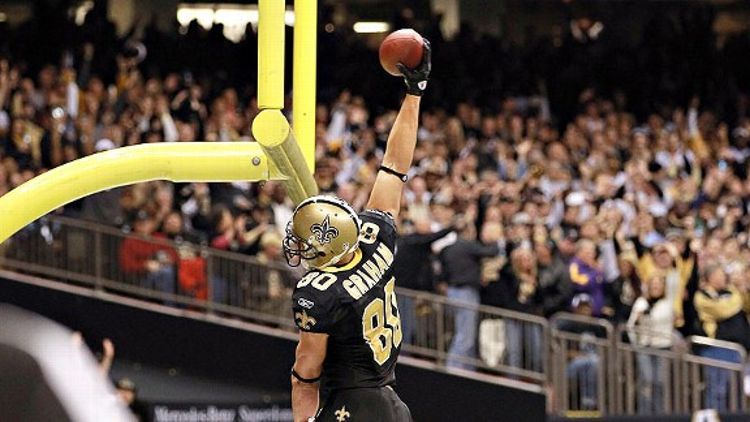 On Saturday night, the Detroit Lions play the New Orleans Saints. I’ve got my baby carrots and Nicorette lozenges, which translates to me being really excited. Why the hyped-up state when I have no rooting or gambling interest? Well, you know how people say football is a results-oriented business? You know how people say that to you in, like, the bank? Well, it’s not. It’s about the journey. It’s about how things unfold and the road you take to get to where you’re going.

Here’s where I get into trouble: I fixate on how I think the narrative of a football game should play out and I get upset when things deviate from that. So for my sanity and your entertainment, here are three different (all totally plausible!) ways this Lions and Saints matchup could down that I would find acceptable.

Drew Brees, Matthew Stafford, Calvin Johnson, Darren Sproles, Jimmy Graham, Titus Young (why not!?). What’s it all mean? Hopefully it means a game that resembles West Virginia and Baylor playing arena football. I want Jim Schwartz to grow a goatee of shame during the game just because he’s a part of such an offensive-minded shootout. In fact, I want to be midway through the third quarter and hear Dana Holgorsen, under the obvious influence of double-fisted scorpion bowls, come over the PA and moan, “CAN YOUUUUUU DIGGGGGG ITTTTTT????”

Except I want him to say it in Mayan. Dana Holgorsen speaks Mayan. I want Drew Brees to break Dan Marino’s record all over again. I want to see Jabari Greer sitting on the sideline with a towel over his head, looking like one of those old men in the beginning of Band of Brothers because Matthew Stafford is closing in on 1,000 yards passing. The score should be 83-71. In the game of life take the over, cousins.

You do understand Roman Harper and Ndamukong Suh are going to be playing in the same football game, right? These two teams, aside from having electric offenses, have the two (allegedly) dirtiest defenses in the league. I mean, this is a football game where members of the Saints are legit considering Brees getting his neck broken as a possibility. People who watch it in 3D are going to be able to check the “war veteran” box on their tax returns.

We’re all primed for an offensive showdown, but in this scenario, defense takes over. And by “takes over,” I mean Gregg Williams and Gunther Cunningham screaming at each other, shirtless, from across the field, lighting copies of Bill Walsh’s The Score Takes Care of Itself: My Philosophy of Leadership on fire. They’re going to call for blitzes during television timeouts, during halftime, during happy hour.

The end of this game can only be decided in one way: Cunningham and Williams each lining up in the opposite end zones and running at each other, a la Mickey Rourke and John Lone in Year of the Dragon. May the team with the craziest, most profane, defensive coordinator win. (Sidebar: Cunningham, on his swearing during last week’s bonkers Green Bay game: “If I (had been) mic’d, all the women and children would have been in bad, bad trouble.”)

A tight, 17-14 game is coming down to the final moments. Darren Sproles is returning a punt and has nothing but open road in front of him as he races down the sideline until, shockingly, 15 yards from the house, he gets clotheslined by Gunther Cunningham, forcing the referees to watch the replay so many times we start to wonder if they’re screening the The Tree of Life Blu-Ray under the little video tent. Roger Goodell decides the game should be settled by a winner-take-all round of Punt, Pass & Kick, during which we find out Nick Fairley is actually the reincarnation of Ray Guy. The Lions go to Green Bay and we all go to the hospital.

Previously by Chris Ryan:
How Demba Ba and Newcastle Rocked Manchester United
Rankonia: The Triangle Power Rankings
The Reducer: Do The Collapse