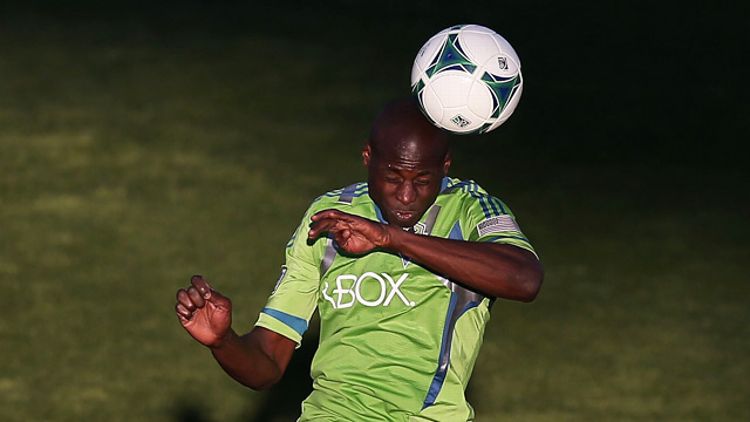 I was in an e-mail exchange with the writer Kevin Sampson recently and I happened to mention the name Djimi Traore and his recent move to Seattle Sounders. If it’s possible to beam with pleasure in an e-mail, that’s what I got back, as he described Traore perfectly as an “absolutely shambolic hero.”

Traore has built his career in being remembered somewhat fondly by fans of the teams he has left and enjoyed somewhat nervously by the teams he still plays for. He’s an unpredictable law unto himself and thus a player of far greater magnitude than a dullard like Lionel Messi. Messi is just sublime. Traore is also ridiculous.

The apotheosis of Djimi Traore was of course the 2005 Champions League final. As well as being one of the most dramatic finals of the modern era, this was definitely one of the strangest, as an overmatched Liverpool team took on an AC Milan side expected to win at a canter. There was an unmistakable sense about the ultimately triumphant Liverpool side that they had won a contest to be there. (And by that I don’t mean the controversial semifinal against Chelsea, I mean a contest where you mail in to complete, in no more than 15 words, the phrase “I would like to play in the 2005 Champions League final because … ”) And nobody epitomized better the sense of someone who’d ambled onto the field by mistake than Djimi Traore.

Within the first 60 seconds our hero had given away a free kick from which Milan duly scored. They then ran two more through the shambolic Liverpool defense, before a halftime break during which the Milan players presumably posed with the trophy and wore commemorative T-shirts. What happened next is the stuff of legend of course, as Liverpool rode an unlikely 10-minute spell to tie up the game and ultimately win on penalties.

In the aftermath of the third Liverpool goal, most people remember the goalkeeper Jerzy Dudek making an amazing point-blank double save from Andriy Shevchenko as the Milan side recovered from the shock to batter the Liverpool defense through the remainder of the game and throughout extra time. But just as important was a clearance off the line by one Djimi Traore — who somehow managed to convey the impression that he just so happened to be there at the time, rather than particularly intending to clear it.

That’s the magnificent thing about Djimi. When you look up “Djimi Traore” on Google, the first phrase other than his name to come up is “Djimi Traore own goal.” Vital clearances are an occupational hazard for a man who is just as likely to finish like this (1:03 into the video):

The other thing about Djimi is his deep reserves of belief. Again, this is not so much about the kind of self-belief we call confidence, more a kind of childlike wonder that believes that anything is possible at any given moment. In a world of overly drilled players calculating odds, patient buildup play designed to unpick defenses, or moving the ball laterally to maintain possession and preserve leads, Djimi represents the sort of profound innocence that has had coaches in Laval, Liverpool, Lens, Charlton, Portsmouth, Rennes, Birmingham, Monaco, and Marseille tearing their hair out, only to see him then do something like this:

That happened last night. Djimi’s in America now — Seattle, to be exact — though we can’t be sure if he was aiming for Japan. Nobody knows. That’s the genius of Djimi Traore. Expect the first goal scored between time zones to be just a matter of weeks away. Just don’t try to guess which end of the field it will come at.

Men in Blazers: The Budweiser Cup, Tim Howard's Injury, and the Search for America's Next Top Soccer Fan