The Sound of Messi 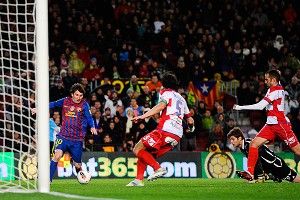 You know what one of the best sounds in sports is? The sound of the Camp Nou crowd reacting when Lionel Messi scores a goal. There are other sounds: The rising volume of a gallery watching a putt roll toward the hole to clinch a major, or that metallic “thwank” a hoop makes when Russell Westbrook dunks. But there’s nothing like the Camp Nou when Messi scores. And Messi scores a lot.

On Tuesday, against Granada, the Argentine forward netted his 235th goal in Barcelona colors, making him that illustrious club’s all-time leading scorer. The great players who have worn the Barca blue and red are some of the greatest players to ever walk onto a football pitch — Cruyff, Ronaldinho, Rodriguez (who previously held the record), Kluivert, Rivaldo, Eto’o, Laudrup, Guardiola, Xavi, Iniesta, Hagi, Romario, Stoichkov — but Messi, undoubtedly, is greater than them all.

Messi’s brilliance has been rhapsodized about, analyzed, broken down into metrics and built up with poetics. At this point, you must know that this is a player dominating and defining an era of a game. He’s comparable to Tiger Woods and Michael Jordan more than he is any other footballer.

So why don’t we steal a little bit of time today and just watch him. Watch 222 of his Barca goals here:

Watch my favorite goal, his Maradona-mirroring slalom through the entire Getafe team, here:

Best part of that one is then-coach Frank Rijkaard’s dumbfounded, slow clap. I can’t think of many other athletes who are just so much fun to cheer for. And nobody cheers for him like his home crowd.

Watch this, a goal against Valencia this February — part of a 5-1 drubbing Barca gave Los Che — perhaps the most perfect example of Barcelona’s team aesthetic, Messi’s extra-sensory perception, and the absolute beauty of this sport. But don’t just watch — listen. Listen to the way the Barcelona crowd will go from a collective gasp at the unfolding of a play, work themselves into some kind of fever pitch with tension and bewilderment over a piece of Messi skill and, finally, let out a crazed, ecstatic scream of joy, disbelief, and, perhaps most of all, pride when the ball goes in. Because while Messi might come from Argentina, part of the reason he has been so successful is this perfect union of player and club. He belongs to them.