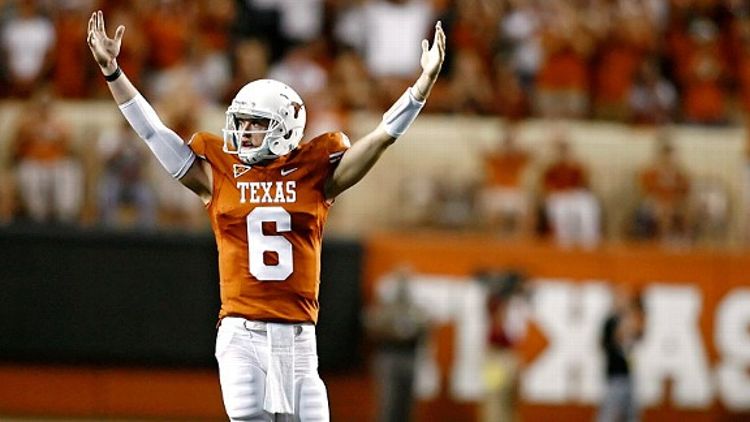 The genesis of this feature is simple: The editor in chief of this website, having fallen into a deep funk over the now-irreversible cancellation of a Raptors-Pistons preseason game, and having deemed himself too slothful to do the legwork required to consult his television listings as the college football season nears its apex, has ordered me to do the work for him. Under veiled threat of expulsion from various wagering pools, I have complied. The (completely arbitrary) results have been collated into time slots (EDT) and tiers: One for mainstream populists (The Bo), and one for contrarians and indie-rockers (The Dudek).

A state fair that is three years away from resorting to deep-fried leather, a stadium that served as the setting for the greatest Strange But True Football Story of all time, and the younger brothers of a legendary Texas wide receiver/quarterback tandem going up against a quarterback named Landry: It’s Anthony Bourdain hosting a Friday Night Lights marathon. It’s cholesterol and violence. It’s America incarnate.

(Also, this quote from a Texas State Fair spokeswoman — “The entries do not have to be fried, but it quickly became all about frying” — should be printed on the dollar bill.)

Boardwalk Empire offense (Tech rushes for 378 yards per game, and throws far fewer passes than any non-service academy program) clashes with ubermodern garishness. I imagine it will play out like a hyperviolent remake of On Golden Pond.

You could watch LSU blow out Florida over at the CSI Network, but that’s a sucker’s bet. For the moment, Les Miles is too damned good to be interesting. And, until he loses, the most quietly fascinating coach in America may be Bill Snyder, a curmudgeonly 72-year-old tortoise who’s in his second stint at a school that was, for a considerable period of the 20th century, the worst major program in America. If Snyder is not under contract to Beelzebub, it’s only because he predates him. Watch the man before he ducks back into his shell.

Appeals To: Overtired Octogenarians, Those Who Relish the Decline of the American Heartland

In 2004, Iowa went on the road and defeated Penn State, 6-4. This was the worst college football game of the past decade, with the exception of an obscure Division III game in Minnesota that went four scoreless quarters and seven scoreless overtimes before culminating in the torture of a blind horse. This will not be a 6-4 game; and yet theoretically, given the dull composition of both sides, it could be worse. This may be the game that spurs Joe Paterno’s immediate retirement, leads Kirk Ferentz to quit and become an ethanol spokesman, and sullies the Big Ten’s reputation to the point that it gets Wisconsin expelled from the BCS hierarchy.

Texas Tech is ranked in the top 10 nationally in passing yards per game, averages 47 points per game and has given up 34 in each of its last two games. A&M is putting up 37.5 each week, and has lost its last two contests by a total of five points while surrendering 72. You could watch Alabama-Arkansas in this same time slot, but that would be a mistake for one simple reason: This may be Gus Johnson’s college football bar mitzvah.

East Carolina’s Dominique Davis went 41-of-58 for 417 yards in last week’s loss to North Carolina. His coach is Ruffin McNeil, a formerly enormous ex-Mike Leach assistant who once looked like this. Houston’s Case Keenum has surpassed 2,000 yards passing after five games. Houston could potentially go undefeated, which would earn it a spot in a bowl game sponsored by an auto-parts manufacturer. This is straight indie here, the college football equivalent of a Can album. If you are an otherwise sane person, you may feel free to care less. I’ll be watching anyway.