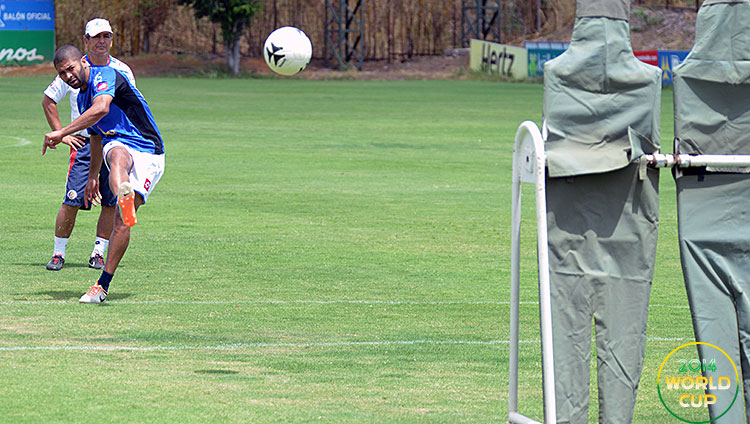 Basically, I figure that most of these high-profile injuries have been so extensively covered, analyzed, pored over, blogged and tweeted about, etc. that they may now have their own unexpected side effects.

But I do want to talk about Alvaro Saborío.

A couple of weeks ago I was on a World Cup panel in New York when the subject of England’s chances in the tournament came up. I found myself regaling the crowd with a long and torturous reverie about a potential sequence of events in England’s June 24 group-stage match against Costa Rica. It was one of those soliloquies that starts unfolding under its own fantastic logic and leaves the hapless person mouthing it somehow powerless to stop, like they’re podcasting in tongues.

Basically I’d extrapolated from Roy Hodgson’s cheerful ignorance, at the time of the draw, about the team in their group that wasn’t Italy or Uruguay, to imagine an all-too-familiar World Cup scene. It’s a scenario whose archetype was probably the 2006 World Cup group-stage slog against Trinidad and Tobago, where a baffled England huffed and puffed and long-balled and long-balled some more before Peter Crouch eventually got a barely deserved BIG MAN™ goal in the 83rd minute.

This time round, with the English in just one of many groups of death at this World Cup (see also, America, United States of), their pre-tournament narrative has been all about their three-way struggle with Italy and Uruguay, meaning at least one former World Cup winner will fall at the first hurdle. And nobody outside of the CONCACAF region appears to be talking about Costa Rica.

How the bigger three teams fare against Costa Rica — assuming the Ticos don’t punch above their weight in every game, but do so in at least one — might determine the group winners and also-rans. And it was that prospect I raised when I was asked to imagine how England’s progress through the tournament might go.

Looking at Costa Rica’s five-man defense that they like to deploy when notionally outmatched, and their willingness to frustrate opponents while being ultra-cautious on the counter, there was every prospect, I said, of us seeing that kind of furrowed-brow, fight-you-buggers English performance in which they keep trying to bash a square peg into a round hole, or a square ball onto a right peg, with predictable results.

It’s the kind of performance that usually involves TV cutaway shots in the second half of the manager leaning forward intently, but sitting very still, while assistants lean ever farther back, with only the motion of frantic gum chewing indicating that there’s any life to be found in the shadows back there. Other shots on the field will show close-ups of Steven Gerrard doing that face that looks like he’s seen something that disgusts him in the Daily Mail. At some point Danny Welbeck will warm up.

And then, as I imagined it, after yet another set piece had crashed off an eight-man Costa Rica wall, a misjudged bounce and a punt around the 73-minute mark would see the ball break to Alvaro Saborío on the edge of the England box, and Saborío being what he is, there would be every chance he would seize the one chance he would get all game.

And I have to admit that as I described this possibility I was grinning at the thought. Not for any particular malice against England, but because watching Saborío plunder a goal from half a chance, against the run of play, is one of those minor pleasures any completist should add to their sticker album of things they’ve seen on the field. It wouldn’t have even needed to be decisive. Costa Rica could have thrown the lead away to Rickie Lambert’s 9,347th consecutive penalty in injury time, and it wouldn’t have detracted from the thrill of Sabo’s gut-punch finishing spiced with just a hint of schadenfreude.

Sadly though, that prospect is no more. Unfortunately for Saborío and fans of underdog surprises, the striker has broken a metatarsal in training camp and will be out for the World Cup, and indeed the next four months.

It’s not news that caused huge ripples outside of Costa Rica and MLS circles (Saborío plays for Real Salt Lake), certainly compared to the vigils and inquests around Suárez. But in its own way it greatly diminishes one of the potentially entertaining facets of Group D, and forestalls the chance for a player from one of the less heralded nations to fulfill his longstanding dream of playing in a World Cup.

It also does create another opportunity for a line of speculation. With Suárez a doubt and Saborío out, Roy Hodgson is just an Italian striker away from a trifecta. Be afraid, Mario Balotelli’s groin — be very afraid.

Who Got the Better Birthday Present?

About Last Night: Getting All A's