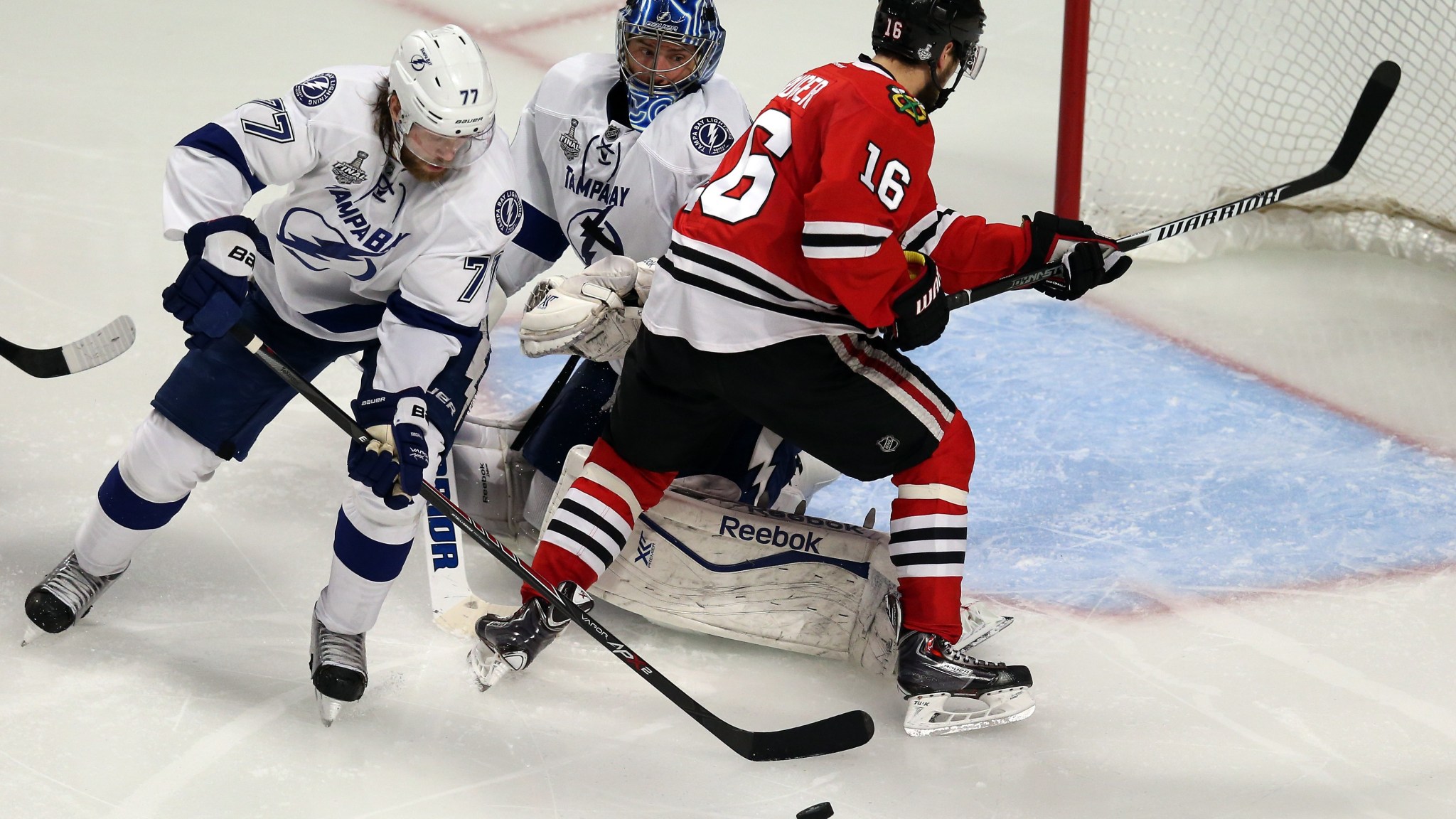 When they’re together on the blue line, Anton Stralman and Victor Hedman speak to one another mostly in English. As they grow exhausted, though, they increasingly revert to their native Swedish. “In-betweener,” Hedman deemed their Swedish-English hybrid, with a smile, on Saturday night.

But when Stralman went to celebrate with Hedman following the Tampa Bay Lightning’s 3-2 win over the Chicago Blackhawks in a silenced United Center on Monday night, the first words out of his mouth were in a language of their own: astonished.

“I said to him after the game, ‘How do you find those plays, man?’” Stralman said, his wispy, wet white-blond hair poking up every which way like an albino hedgehog.

Five minutes into Game 3, Hedman received the puck behind the Tampa Bay net — a common, everyday occurrence, the kind of ho-hum situation that happens umpteen times per game. It had been a long shift for him and Stralman, and he was tired. What happened next, however, was anything but ordinary, anything but gassed.

He noticed that Ryan Callahan, far up the ice, had slipped past a stumbling Johnny Oduya. Hedman unleashed a slapper that soared up the ice and right onto his teammate’s stick, like a quarterback delivering a long spiral. Oduya lunged, but it was fruitless; Callahan was alone and already winding up. The puck flew just over goalie Corey Crawford’s shoulder and struck the inside of the crossbar with a satisfying ping. It was a lovely 1-0 goal by Callahan, born of an even prettier pass.

This play had a bookend. With just under five minutes to play in regulation, the teams tied 2-2, and everyone anticipating overtime, Callahan’s and Hedman’s roles were momentarily reversed. This time it was Callahan who spied his defenseman with room to noodle, and this time it was Hedman who received the pass (a precision backhand) and picked up speed. He accelerated into the Lightning’s offensive zone, pulled the puck with him deep and to one side, then slid it directly in front of the Chicago crease as Cedric Paquette arrived. Paquette buried it almost in spite of himself, and Tampa Bay earned the 3-2 lead with which it would close out the game.

Anyway, Hedman didn’t have an answer for Stralman in English, Swedish, or any other language. “No, he kinda just shook it off,” Stralman said with a laugh. “I’ll have to ask him again.”

On Monday morning, in addition to all the local Chicago news crews, disheveled writers, technicians, equipment managers, and former players clogging the halls and rooms of the United Center, a handful of hopefuls milled around, shifting their weight from foot to foot. They exuded awkwardness and self-assurance; they were wide-eyed yet seemed mostly above it all. They were, in other words, classic teens.

Each year since 1993, the league has brought its finest prospects to the Stanley Cup final for a small taste of what’s in store. (The first class included Paul Kariya, Chris Pronger, and Alexandre Daigle.) It gives the media a chance to chat with the guys who will be onstage early at the NHL draft two weeks from now, and it gives those future rookies a look at the traveling circus they might be running away to join if all goes right.

This year’s group was particularly notable, as it included long-heralded talents like Connor McDavid, who signed with Reebok when he was 15, and Hobey Baker winner Jack Eichel, a freshman standout at Boston University. Those two have been poked and prodded for so long (figuratively and literally; they just finished up a few days at the NHL combine, where they were regarded like prize livestock at a 4-H fair) that they’ve already developed a protective and world-weary veneer.

McDavid is such a low talker that it’s difficult to hear him; asked what he’d choose as his goal song if he had his choice, he came up empty. “I’m not really a music guy,” he said. Eichel was reserved, though he showed flashes of personality when you weren’t trying to force it out of him. He needled his longtime buddy Noah Hanifin (a top prospect from Boston College), and on a visit with Don Cherry, at the urging of his father, he gifted the proud Canadian icon with a USA Hockey shirt.

On Sunday, several latter-day superstars recalled their own days visiting the final in their draft year.

“I remember I was in Anaheim when the Ducks were playing the Senators, 2007,” Patrick Kane said. (Cherry recalled that Kane was so small back then, he thought he was a stick boy.) “We actually sat right in front of Snoop Dogg. He had a couple of kids with him. One was Lil’ Snoop, with the lil’ apostrophe, of course, and the other was Spanky or something.”

“I remember being in Detroit, watching there,” said Steven Stamkos, nodding toward his linemate Valtteri Filppula, who played in that 2008 series against Pittsburgh. “Just hoping I could be on this stage someday. Here we are, so it’s pretty special.” When the prospects toured the Lightning locker room Monday, Stamkos made a point of going over to chat with them; with his beard and crinkly eyes, he looked like a beloved camp counselor interacting with the kids.

For the prospects, Monday night’s game was a showcase of life in the NHL and the big and/or long careers that can be built from all sorts of foundations, a reminder both that patience is a virtue and that it’s never too early to make an impact in whatever way you can.

Hedman’s pass to Callahan, for example, featured an elite skill guy setting up a player who has staked his name and reputation almost entirely on hustle after being drafted in the fourth round. Then Chicago’s Brad Richards, who entered the NHL while these top prospects were still toddlers wearing diapers, tied the game 1-1 with a power-play slap shot.

The next three goals all came from players in their early twenties who have carved out huge roles on their teams. Brandon Saad, who in 2013 made the NHL All-Rookie team and also won a Cup, fired a beauty past a clearly laboring Ben Bishop for a 2-1 Chicago lead.1 Ondrej Palat, a 2011 seventh-rounder, answered 13 seconds later for Tampa Bay, the Blackhawks’ goal celebration having scarcely died down when he pushed the puck in for the tie. And 21-year-old Paquette, who has mostly been tasked with shutting down Chicago’s top forwards, won the game by doing what they largely haven’t — take advantage of a net-front opportunity.

An opportunity, of course, that had been orchestrated by Hedman.

It probably wasn’t lost on any of the onlooking prospects that Hedman was drafted second overall by the slumping Lightning in the summer of 2009. (If you want to brush up on the state of the franchise around that time, just know that ownership was fronted by a producer of the Saw movies and at one point Barry Melrose was fired as coach after 16 games.) Still a kid, Hedman was thrown into a huge role right away, a tall order for such a young defenseman. He had his growing pains, but they were part and parcel of his rapid growth.

Twice on Monday, before and after the game, Tampa Bay coach Jon Cooper said these playoffs have been a “coming-out party” for the defenseman. While avid hockey fans have long been aware of Hedman’s talent, these last few months have undoubtedly fixed a spotlight on the 6-foot-6 Swede.

“He’s played this well for us for a long time,” Cooper said. “We just haven’t had this for everybody to watch.” Part of this has been because he plays in Tampa, sure, but part of it is also that despite recent years of sterling play, Hedman has been hampered by some high-profile snubs and setbacks.

Last year he had his most productive season as a pro, finishing the season with 55 points, but he was left off the Swedish Olympic team in Sochi. (It’s crazy, in hindsight, to think that Team Sweden managed silver with neither Hedman nor Stralman on the blue line.) This fall, a broken finger sidelined Hedman for a month and a half and cost him prime Norris Trophy consideration. Hedman says he got through it by trying to emulate the example that team captain Stamkos had set a year earlier when he went down with a broken fibula early in the season yet continued to show up at the rink with a sunny disposition.

As he edged ever closer to a Stanley Cup, Hedman considered the prospects gawking at him and remembered what it was like to be on the brink of the NHL himself.2 “Seems like yesterday, actually, to be honest,” he said. “They’re going through an amazing journey right now … it was a once-in-a-lifetime experience, something I’m going to look back at when I get older and really appreciate.”

If he and the Lightning keep up this pace and manage two more wins, he’ll have to mentally sort through an ever-building heap of newer moments and memories in order to get back to that day. With his vision, that shouldn’t be too difficult. Just ask Anton Stralman: Victor Hedman seems to routinely find things that few others can.