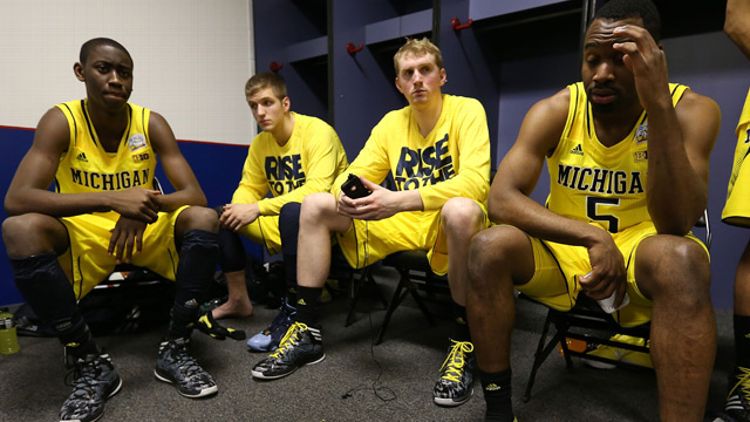 In the hallway outside the Michigan locker room, we the media huddled on the far side of the retractable dividers, a mass of cameras and notebooks and digital recorders. Inside, head coach John Beilein had a few minutes to speak in private with his players after they’d lost the national championship game to Louisville. When he was done, the players took their turns. Glenn Robinson III went first, which surprised the others because of his shyness. The theme of his speech and those that followed was constant: This was a great season, we’re brothers for life, we should be proud. When everyone had finished, they sang the fight song together. It was a postgame tradition normally reserved for a win, but it felt like the right way to end the season.

Then they hustled Beilein, Trey Burke, Tim Hardaway Jr., and Spike Albrecht to the official press conference room and opened the locker room doors to the hordes. We filed through a security bottleneck, shouted at by the usual array of hired security who enjoyed their power 10 to 25 percent more than they should have, and swept in through the doors. We saw a table littered with empty Powerade bottles, a bowl full of apples and bananas, and beyond that, the Michigan players standing in front of their lockers with tears in their eyes.

Back on the court, the Louisville players were still celebrating. The team that couldn’t lose, no matter which of its star players struggled or what obstacles were placed in its way, had won again. Rick Pitino won a national championship the same day he was elected to the Basketball Hall of Fame. Luke Hancock had pulled off another miracle and, for his reward, held the trophy for Most Outstanding Player in his hands. They wore their championship T-shirts and hats, and their fans stuck around to roar their approval after every word.

But in the Michigan locker room, Nik Stauskas had barely stopped crying when the camera lights hit his face from all sides. His eyes have a young, wounded quality anyway, and now they were red. He tried to speak stoically, starting sentences with words like, “It’s tough [to] swallow, but we’re going to come back next year …” Then his voice would catch, and he’d start crying again. Talk about what Coach Beilein said to you in here, one of us would say. “He just said he was proud of every single one of us. He tried to stress the point that even though we lost this game, we can’t get down on ourselves …” And he’d crack again. He tried his best to follow the boilerplate script, but his emotions betrayed him at every turn.

Tim Hardaway Jr. stood against his locker, fresh off his latest NCAA struggle — 5-13 from the field, 0-4 from 3 — and answered the same questions, some of them good, some inane, on repeat. What was it like to have members of the Fab Five watching you from the stands? “It was good. They know how to get this far; it’s an inspiration to see them.” His voice was bland, his posture abiding but not friendly. What was the most difficult aspect of this loss for you? “The loss itself.” When will you make your decision about next year? “I’m not thinking about that right now.” Seeing Jalen Rose and the others in the crowd, what did that mean for you guys? And on and on.

But I never saw him raise his voice or scoff at a question. He was briefly annoyed once when a man shouted a question at him and a microphone hit his chin at the same time, but he suppressed that emotion the minute it flickered across his face.

This is clearly one of the most painful losses of your career. When it’s over, you have a few minutes to talk to each other, to be alone, and then it’s an onslaught of media. Your pain is still fresh. You can’t get mad, you can’t get annoyed, you can’t refuse, and it lasts a long time. What’s that like?

Nik Stauskas: “It was tough because I was still crying at that point, and it was just tough to even speak in front of the cameras and give my honest answer. So it’s really tough just trying to change your mind-set, change your emotions, that quick. I mean, even still right now, I’m a little bit emotional. I haven’t really gotten over it yet. It’s tough. We’re all human beings, we took this loss really tough, and it’s a really tough situation.”

Hardaway’s laughter was satisfying, in a way, because it cracked his shell for a moment. It broke through the training, and it showed, for an instant, the real difficulty it presented. The laugh was part sarcastic, part “how could I possibly explain this to you?,” and part “it’s miserable and depressing, but I know better than to say that on the record.” It was also the prelude to shutting down again. I even interrupted him halfway through: “That’s the nice answer” — but he was careful not to take the bait a second time. Still, I got that one laugh.

Taking the long view, the Wolverines had little reason to be upset. They were facing the best team in the country, and they had already overachieved in the tournament. It took a miracle comeback to win the Kansas game in the Sweet 16, and then they got hot in a way that felt almost unbelievable. It continued 16 minutes into the championship game itself, when Spike Albrecht, whose previous career high was seven points, tallied 17 in one of the most incredible and unlikely displays in championship history. Like Wichita State before them, the Wolverines had a 12-point lead on Louisville.

But again, this is the team that doesn’t lose. Russ Smith goes 3-for-16? No problem. Michigan shoots 52.1 percent, Louisville shoots 45.9? No problem. There’s always a way, and when Luke Hancock hit four 3-pointers in two minutes to cut the lead from 12 to one at the end of the first half, you could almost chide yourself for forgetting. This is the team that doesn’t lose.

And Michigan was the no. 4 seed that came out of nowhere. Which is why it was hard, in the abstract, to pity them. Even Michigan fans would probably admit that Louisville would’ve experienced the greater tragedy with a loss. But confronting that maize-and-blue locker room, and the clash of private emotions laid bare by the onslaught of journalists, can’t help but give you a sympathetic jolt.

Jalen Rose wandered around with a somber expression on his face, hugging the players and offering muted condolences. But he was still wearing a foam Wolverine hat, the two buck teeth jutting out over his forehead. That was the closest thing to comic relief in the downcast room, but nobody was laughing.

The pain hit everyone. Brandon Verlinden is a Michigan senior and has been a team manager for all four seasons. His eyes were red, too, and he sat by himself with the other managers watching the scene play out around them. Somehow, they looked the most isolated. “All of us played in high school, [but] our playing careers are long over,” he said. “And this is … kind of the last chance we’ll have to be part of a team. Not too many of us are going on to pursue careers in basketball fields, so this is it.”

Matt Vogrich, another senior, was a starter in November, playing about 20 minutes per game. That time diminished quickly, and soon he was going entire games without playing at all. He hasn’t played more than seven minutes in a game since December, and saw just two minutes of action in the NCAA tournament. To make matters worse, I’d forgotten his name and made him suffer the indignity of reminding me. But he was polite, too, and spoke about the odd feeling of how he’d never have to come to practice again. Vogrich is a business major, and has a job as an IBM consultant waiting after graduation. But he’s going to help his high school team in the summer, so he’ll still be around the game.

Elsewhere, Mitch McGary held court next to a Coca-Cola refrigerator, Jordan Morgan answered his questions and then huddled at the base of a locker, and Trey Burke, because he’s the best player in the country and the one man in that locker room who held his own with all comers, took it all in stride.

That sense of composure, even amid the tears and the reality of the loss, was what stayed with me after I left. The situation in the locker room was not ideal, but the sport makes money because people care, and because people care, journalists have to ask their questions, and the players have to answer. And even though the players aren’t compensated like professionals, this particular bunch behaved like them. There’s strength in that, and you can’t help but be impressed. It’s a measure of their character and John Beilein’s, as well, and the same could be said for the winners. The first move Peyton Siva made, with two seconds left and Michigan having sagged its shoulders in concession as the refs adjusted the time on the clock, was to hug Burke in the backcourt. Chane Behanan followed, and so did Hancock. They moved from him to the other Michigan players, consoling them before the celebration. They had just played one of the best games in recent tournament memory — and the best first half of college basketball I’ve ever seen — and now they were proving something a little deeper.

Rick Pitino: “I think when you work as hard as we work, it builds a foundation of love and discipline, ’cause you have to suffer together. You’re always pressing … to be honest with you, I’m just so amazed that they should accomplish everything that we put out there. I’m absolutely amazed as a basketball coach.”

That love, that class, or whatever you want to call it, made for a special battle on Monday. In a season when college basketball struggled to shine through the ugliness of defensive play and questionable officiating, the final 40 minutes gave us a chance, mercifully, to love the game again.