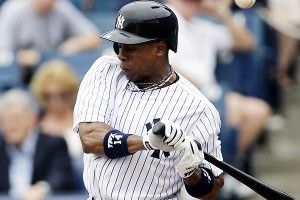 The New York Yankees have carried some truly miserable benches over the years. Which makes sense, if you think about it. When you trot out rosters stuffed with superstars, no self-respecting part-time player is going to sign with you, given how little playing time he’s likely to get. Every time Clay Bellinger pulls out his two World Series rings, he should thank George Steinbrenner and Brian Cashman for building teams that were so loaded, the Yankees couldn’t do any better for a backup.

This year’s Yankees team isn’t stuffed with superstars. At this point, they have two: Robinson Cano (who’s eligible for free agency at year’s end unless the Yankees can convince him to re-sign by offering the GDP of São Tomé and Principe) and CC Sabathia. But now, instead of playing time being the problem, it’s money. The 2013 Yanks are so committed to holding the line on salaries, and have so much tied up in thirtysomething former stars like A-Rod, Jeter, hell, even A.J. F’ing Burnett, that they can’t, or at least won’t, outbid other teams for quality part-time players. Which is why, after Curtis Granderson suffered a broken forearm that will keep him out 10 weeks, the projected Opening Day left fielder for the Yankees — the mighty New York Yankees — is Juan Rivera.

Granderson’s injury is just the latest setback for a Yankees team that has major collapse potential. Nick Swisher bolted for the Indians, while the Pirates (the Pirates!) outbid New York for Russell Martin. In Swisher’s stead, the Yankees signed Travis Hafner, a once-devastating hitter who’s still a plus bat when healthy, which is a bit like saying Rick Ankiel was a plus pitcher when his fastball wasn’t drilling people in the 14th row. Swisher’s actual vacated right-field job falls to Ichiro, who we’re supposed to believe is now reborn at age 39, because he found a few holes in the defense in 67 games for New York. A full year of Brett Gardner could be a big upgrade … but Jeter’s a gigantic regression risk coming off ankle surgery and following an out-of-the-blue 216-hit season. Mr. Glass Alex Rodriguez has been replaced by the nearly-as-gimpy Kevin Youkilis. Replacing Martin at catcher are Chris Stewart and Francisco Cervelli, whose collective offensive impact projects to be dead ball–ian. As good as the starting rotation might be with everyone back, the starting nine could make this the worst Yankees season in more than two decades.

Given all those holes and potential holes, Rivera’s presence in the lineup bodes ill for the Yankees’ chances of repeating as AL East champions, even if he doesn’t play more than the five weeks or so that Granderson would be projected to miss after Opening Day. Rivera’s essentially been a replacement-level player in five of the past six seasons, with no significant contributions since 2009. The hot rumor that made the rounds following Granderson’s injury was a Yankees reunion for Alfonso Soriano. It makes sense on paper. Soriano clubbed 32 homers last year, and the Cubs would be overjoyed to get any kind of promising young talent for him, let alone dump the two years and $36 million left on his onerous contract. Soriano being held up as the great hope for stabilizing the lineup is the deeper problem: A 37-year-old outfielder who doesn’t get on base and can’t run at all anymore coming off a late-career bounceback season shouldn’t be in position to be any team’s savior, least of all the $210 million–plus Yankees.

The broader issue, and one that warrants exploring, is how to build an optimal roster, assuming you have to sacrifice somewhere. If the free market is supposed to tell all, most teams with tons of money to spend have made clear how they intend to compete: by signing as many stars as possible, whether their own homegrown ones or big-ticket free agents. But whether it’s the lack of opportunities for backups, laziness on the part of management, or just fear of overkill, many richer teams’ GMs run into the Curtis Granderson problem, where with an eight-figure-a-year player pushed to the sideline, the alternatives are awful. Thus you end up with, in fantasy baseball parlance, a stars-and-scrubs roster.

Is that truly the best way to go? The A’s were 30-to-1 long shots to win the AL West last year, buried behind the heavy favorites in Arlington and Anaheim. Not a single player produced five or more wins. Yet Oakland charged to a shocking division title anyway, backed by a late charge and terrific balance and depth throughout the roster. When Brandon Allen couldn’t cut it as the team’s starting first baseman, the platoon of Brandon Moss and Chris Carter took over, then combined to blast 37 home runs. The season’s first five starting pitchers were Brandon McCarthy, Bartolo Colon, Tommy Milone, Graham Godfrey, and Tyson Ross; McCarthy, Colon, Godfrey, and Ross combined to make just 59 starts, giving way to the likes of Jarrod Parker, A.J. Griffin, Travis Blackley, and Dan Straily, all of whom posted better-than-average ERAs. Again and again, the A’s suffered injuries to key players and got whacked by miserable slumps, only to have replacements swoop in and fare better than the departed starter’s best-case scenario. If there were ever a team you could reasonably call the Bizarro Yankees, the replacement-killer A’s and their $53 million payroll were it.

Obviously, we shouldn’t attempt any intuitive leaps based on one example of one team. And the particular construction of last year’s A’s was born of necessity, given the team’s limited resources and inability to pay multiple superstars fair market value. But we’ve seen other modest-payroll teams leverage depth, balance, and clever use of flawed players into postseason gold. The 2012 Orioles did it. The Rays of recent vintage have done it. Someone else likely will this year. All of which makes the subject of stars and scrubs vs. maximum depth worth further study. Should teams with payrolls that far exceed Oakland’s pass on a $15 million player or two to collect better utility infielders, platoon first basemen, and spot starters? It’s a subject we’ll try to explore in the coming weeks and months, looking for the next underdog to emerge.

As for the Yankees, even if everything does go south for them this year, you almost certainly won’t see the kind of rebuild that usually comes with that kind of failure, because that’s not what the Yankees do. How they assemble their roster in the future could bear watching, though. Cano, Granderson, Andy Pettitte, Hiroki Kuroda, Youkilis, and Mariano Rivera are all free agents at year’s end, six players in whom the Yankees have committed $79 million this year, five of them past their prime and thus not necessarily worth re-signing. Even with a hard cap of no more than $189 million planned for next season, the Bombers have less than $82 million committed for 2014, but to only five players, two of them unmovable, and one of them someone you wouldn’t want to move. Rising industry-wide revenue streams figure to speed up salary inflation, making the very few top-tier players available in free agency likely to cost obscene amounts.

So instead of shooting the moon, could we see the 2014 Yankees thoughtfully build a 25-man roster around Sabathia and Cano, an assortment of young, homegrown talent, plus the kind of 1-through-25 depth that pushed the A’s to glory last year? Given what’ll be left of this team eight months from now if the worst-case scenario hits the Bronx this summer, we just might.