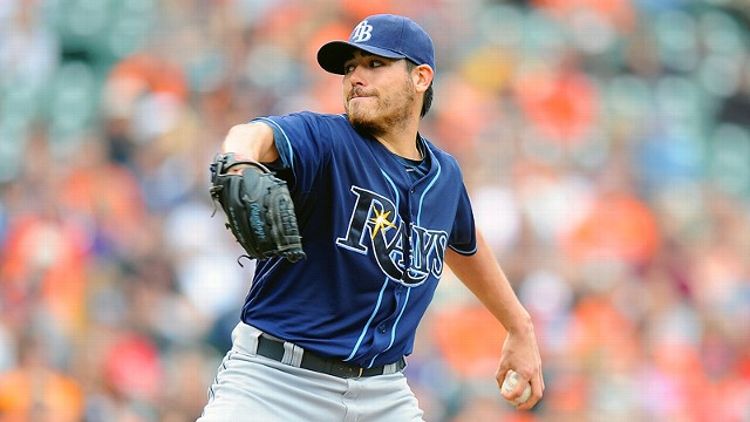 In honor of the Scripps-Howard National Spelling Bee coming up this Wednesday and Thursday, you will find one of the winning words from the last 10 years of competition in each entry. When they don’t fit naturally — which will be always, if my prospicience can be trusted, since they’re weird and useless for all practical purposes — I will heroically shoehorn them in like a stubborn cobbler.

Here now are the highlights from the upcoming weekend in professional American baseball.

10. How to Become Nationally Irrelevant — Move to Toronto (Saturday, BAL-TOR)

This is in honor of R.A. Dickey, who you may remember as the feel-good story of 2012 when he and his knuckleball amassed a 20-6 record and won the NL Cy Young Award. In New York.

You may have noticed after reading his name that we have not heard much from R.A. Dickey this season. Sure, he’s lost some velocity, and that may not be as irrelevant as you think for a knuckleballer. And his stats — 4-5, 4.50 ERA — are much worse than last year. But I still have a few questions. First, how would he have done last season in a division where he’d be pitching about half his starts against teams that scored a combined 2,947 runs, as opposed to 2,724? And would his excellent story of overcoming adversity have been so prominent if he weren’t pitching in New York? And would he have won a Cy Young that probably should’ve gone to Clayton Kershaw (well, OK, obviously not since he would’ve been playing in the American League, but you get what I’m saying)? This is all hypothetical, and predicting what might have happened is about as reliable as constructing a neanderthal Ursprache, but it does make you wonder. In any case, he was one of the best parts of last season, and here’s hoping he’s got some fireworks left in the old arm — the long-range kind, that can reach us across the border.

Seven home runs, 15 RBIs, and a .400 average in the past two weeks. If you’re even borderline Laodicean, Miguel Cabrera will be your God.

Congratulations, James Shields! You are 2-5 with the Kansas City Royals, but with a 2.47 ERA, a 3.09 FIP, and an amazingly low walk rate, you are easily one of the 10 best pitchers in the American League. Cliff Lee of 2012 feels your pain and will present you with your guerdon: A voodoo doll in your likeness with thousands of needles that can’t be removed.

Sometimes people accuse me of having an East Coast bias, so to satisfy those critics, I’m putting a West Coast series at no. 7 on this list and not writing anything specific about either team. (I am a sly pococurante indeed.)

This series happened last weekend, too, and I thought that after beginning to slide, the Rockies would lose three or perhaps all four games to the Giants and be relegated to the basement of the NL West within a month. Instead, they won three of four at Coors Field and are now deadlocked in a three-way tie with the Giants and D-backs atop the division. The offensive numbers are great for the Rockies, but you never really know how much of that is legitimate, and how much comes by way of the thin mountain air. Or can you? At home, the Rockies have scored 132 runs, three more than any other team. On the road, they are dead average in 15th place. It would appear that the runs were autochthonous to the elevated clime of Colorado and not fit to spread to other stadium habitats.

There are six qualifed starters left in MLB with an ERA below 2.00, and we get to see two of them face off Sunday when Shelby Miller takes on Clayton Kershaw. If you somehow missed Jonah Keri’s excellent feature on Kershaw, please read it now. Since that was written, he has thrown 24⅔ innings and allowed exactly two earned runs. It’s almost unfair, like watching Mozart revisit Symphony No. 40 and adding a dozen perfect appoggiaturas. So we know about Kershaw, but who is this Shelby Miller fella? Well, he’s a Cardinals rookie who throws almost exclusively fastballs and curves. So far, he’s made it work for him, mostly because his velocity is just outside the top 10 among starters.

The second-best series of the week sees the Cleveland Indians traveling to Boston for a rematch of the 2007 ALCS. As of this moment, the Tribe are tops in the AL Central — perhaps because of the addition of cymotrichous good-luck charm Nick Swisher? — but after Justin Masterson and Justin McAllister, the starting pitching gets pretty weak. Even with those two, the Indians are 21st in starting-pitcher ERA, which doesn’t seem to bode well for future success. Scott Kazmir and Corey Kluber pitch Saturday and Sunday, and it’ll be interesting to see how they fare against the AL’s second-best run scoring offense.

2. Pitching Match-up of the Week: Sabathia vs. Moore (Saturday, NYY-TBR)

Matt Moore is just insanely awesome right now, with an 8-0 record and a 2.29 ERA. I want to point out, as I did last week, that he has the second-most active two-seamer in the league, which darts away from righties and cuts in on lefties, and a slow, slurvy slider that doesn’t drop. But here’s a weird thing — his FIP, a measure of pitching acumen independent of fielding, is high at 4.20, and his WAR is a super-low 0.6, behind 64 other pitchers in the major leagues. All of this — and especially his .197 BABIP — suggests that he’s been lucky. Perhaps a regression is in his future? If not, he’s on pace to win 30 games. On the other side, Sabathia is having his usual decent start, with a 4-3 record and a 3.43 ERA, but he’s known to catch fire when the weather starts getting warmer. He’s always reminded me of a lumbering bear whose blood runs cold in April and May due to hibernation. Come July? You’d need a stromuhr to clock how fast it flows.

In the preseason, more than one expert predicted that the Yankees would need a serrefine to stop the bleeding by this point in the season (so many blood-related words in the spelling bee, guys). Instead, the ole Bombers are lighting it up and leading the AL East. As with last week, I have some theories about why the reports of their death were greatly exaggerated. When the Yankees take the diamond, it is the ZERO hour. This is the ONE true American team. Whisper the TWO words “Yankees baseball” and you will know it means more than any other noun-noun combination in sports. This is the last team to THREE-peat as World Series champs, and to win FOUR in FIVE years. There are SIX things they’re mad about, and they’re taking over.

Enjoy the games, enjoy spelling, and, of course, enjoy Arrested Development on Sunday.