The MLB Weekend Top 10: Fear and Loathing in Fenway 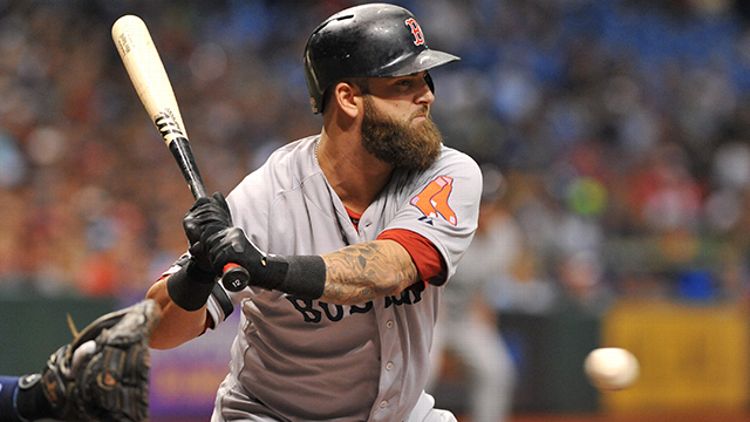 Whoa, whoa, whoa. How is it mid-September? Did we even have August this year? Are the playoffs really sneaking up on us? This is getting serious, gang. Each team has about 15 games left to win, lose, bargain, plead, suffer, and despair. There are only three weekends of regular-season baseball left, starting today, and here’s something important: A fancy word for “third-to-last” is “antepenultimate.” Armed with that knowledge, it’s time for the antepenultimate weekend countdown. Join me!

10. This Week’s Reason to Watch the Astros (LAA-HOU)

This week’s reason to watch the Astros is that you live a nice, comfortable life, and people are suffering around the world. How dare you complain that your sporting event isn’t as exciting as you’d like! You’ll watch every minute of this series, and you’ll like it.

The winner of the “Terrifying Appalachian Hillbilly Beard of the Year” award is red-hot, posting a .368/.500/1.000 line his past six games. I bet when Mike Napoli laughs, it sounds like “huh-huh-huh-huh,” and he drools a little.

We’ve got a doozy of an AL wild-card race, where five different teams — Rays, Yanks, Orioles, Indians, Royals — would kill to nab the final spot. In the NL Central, though, the wild card is no kind of prize at all; in fact, it’s a punishment. Pittsburgh and St. Louis are deadlocked atop the division, and while the winner will probably have the unenviable task of facing the Dodgers in the NLDS, the loser has it even worse, being forced into a one-game playoff with Cincinnati (or Washington, if things go haywire) just for a chance to meet the Braves. We could debate all day about whether a team actually “makes the playoffs” if they lose the wild-card game, but we can all agree that it’s not a secure place to be. The duel between the Pirates and the Cardinals might be the only drama left in the National League.

For a while, it looked like Mad Max Scherzer might win 25 games and run away with the Cy Young. Now? Everything is less certain, and he has been stuck at 19 wins since August 24. This will be his fourth start going for that elusive 20th win, and if he can’t seal the deal, his Cy Young campaign will be very vulnerable — not to Felix Hernandez, as I argued it should be a few weeks ago, but to one Yu Darvish. Scherzer’s recent struggles mean that Darvish now has a better ERA, and he’s already striking people out at an insane rate of 11.86 K/9. He’ll run away with the strikeout crown, and if he can catch Anibal Sanchez, he could win the ERA title too. Suddenly, Scherzer’s runaway candidacy is looking mighty shaky.

Angering sports fans is almost comically easy, but I’ve never inspired so much rage as when I wrote this piece last season about how the Orioles were the Yankees’ “kid brother,” and how they could never win. People were infuriated, gang. And though the comments dried up after the Yankees won the ALDS in five games despite hitting roughly .036 as a team (and right before getting annihilated by Detroit in the next round), I like to think the result made them even madder. The reason I bring this up is because it just happened again, with the Yanks taking two of three at Yankee Stadium and three of four in Camden Yards over the past two weeks. The losses have been near-fatal for the Orioles, but now they have a chance to recover against the Blue Jays — a much-needed respite.

Meanwhile, the Rays are in the midst of a disaster scenario. The only reason the Yankees, Orioles, Indians, and Royals are even in the wild-card picture is because the Rays have coughed up a sure-thing playoff spot by going 5-13 since August 25. Their low tide has raised all ships, and they’ve gone from a commanding five-game lead in the race for the first wild-card spot (and a half-game lead in the AL East, if you can believe it), to a super-tenuous one-game cushion over the Yankees for the last wild-card spot. It’s a free fall, a plummet, and a nosedive all at once. The good news is that the Rays can try to steady the ship against the truly miserable Twins. Like the Orioles, they really, really need to start winning.

Remember when I said the drama was mostly gone from the National League? There’s one possible exception, and it’s happening in OUR NATION’S CAPITAL. (Not sure why I emphasized that, but it felt right.) Amazingly, the Nats have won six straight games and eight of their past nine, creeping up to within 5½ games of the Reds. Don’t get me wrong — this is still the longest of long shots. The Nationals have only 16 games remaining, and even if the Reds went 5-10 to end their season, the Nationals would need to post an 11-5 mark just to tie. And let’s be honest, the Reds probably aren’t going 5-10. Still, these things can change on a dime. If the Nationals sweep the Phillies at home (not unrealistic, with Stephen Strasburg, Gio Gonzalez, and Jordan Zimmermann on the mound) and the Reds lose three to the Brewers, suddenly the margin is 2½ and the math doesn’t look quite so difficult. The margin for error here is nil, but with so little drama in the Senior Circuit, I’m going to keep banging the drum until the dream is dead.

I like to bike, and one of the best moments on a long ride is when you’ve climbed the toughest hill and are looking at a long, serene downhill stretch. “This is going to be easy!” you think. So it is with Cleveland. As I wrote yesterday, the ease of the Indians’ remaining schedule could be enough to help them catch the teams in front of them and nab the final wild-card spot. The pleasantries started yesterday in an almost comical fashion, with a 14-3 win over the White Sox. You could almost hear the Cleveland joy … “Wait, we’re not playing the Tigers, Royals, Orioles, or Braves?! Huzzah! We shall score in the teens!” Of their 16 remaining games, 13 of them are against the three worst teams in the American League (White Sox, Twins, Astros), and we could be in for a real demolition derby.

3. Pitching Matchups of the Weekend Galore!

There are some dandies this weekend, and rather than limit the pitching matchup to just one, I thought we’d spread the love around the league. Here are the four you should be watching:

Friday: Iwakuma (SEA) vs. Wainwright (STL) — I have a gut feeling that Wainwright will be the star of this year’s playoffs

Friday: Bumgarner (SFG) vs. Kershaw (LAD) — Kershaw is trying to keep his sub-2.00 ERA, while it remains an awkward fact that Matt Harvey still has a higher cumulative WAR despite his injury.

Sunday: Nova (NYY) vs. Buchholz (BOS) — Buchholz was super solid in his first start since June last week, throwing five scoreless innings, while Nova has emerged as the ace of the Yankees staff and one of the best pitchers in the American League. Did I mention this is Sunday Night Baseball, on my favorite network, ESPN?

Folks, Texas is NOT COLLAPSING. Nothing to see here! So they’ve lost eight of 10 … who cares? Everyone needs to calm down. This is not last season. And yeah, maybe they’re about to embark on nine games against potential playoff teams, and maybe a once-secure wild-card lead is down to three games. Just chill out, all right? Texas has got this. Because if there’s one thing Texas doesn’t do, it’s self-doubt! Even if the Rangers fail to make the playoffs, they’ll still show up, armed with Lone Star flags and an inflated sense of ego. Don’t mess with Texas! Don’t even tell them they’re coughing up a playoff spot!

Before the recent series win against Baltimore, the Yankees were reeling. Since the start of August, I identified at least six losses that meant the end of their playoff hopes, but somehow they stayed afloat. Again, the Rays played a big part in that, but it has definitely seemed like this team keeps getting closer to the wild card without really earning it. Maybe it’s Yankees destiny and aura, or maybe they just have more heart and gumption than any other team combined. All four of those things are probably true. But I also know this: Boston would love, love, love to deal the Yankees their final death blow in Fenway. Remember the Boston Massacre, when the Yankees swept a five-game series from the Sox in 2006, destroying any and all of Boston’s postseason hopes? God knows they’d love to return the favor here. I, for one, plan to spend the weekend in alternating bursts of anger and terror, first hating Mike Napoli’s stupid bearded face and then begging him to show us mercy. And for that, I will not apologize.

Rage and fear: Defining the universe’s greatest rivalry since April 26, 1901. Have a great weekend.