The MLB Over/Unders I’m Not Touching 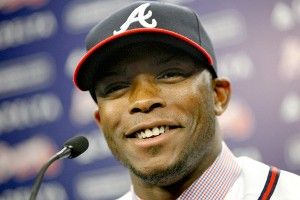 Wednesday was a special day here at Casa Keri. Upon reading the big news, I stripped down to my custom-made Youppi Underoos, poured a case of Great Divide’s finest over my head, and ran headlong into walls on four non-consecutive occasions. That’s right, friends: The 2013 MLB over/unders finally hit the streets.

For those of you unfamiliar with the wonders of baseball over/under wagering, check out the piece I wrote about it last year. Here’s a condensed explanation: Nevada sets a win total for every team in baseball, with the goal to attract as much betting action as possible. From the bookmakers’ perspective, the betting, ideally, will be fairly balanced on both sides, although they claim a small vigorish (basically a bit of extra money) on many of the lines. For shnooks like you and me, the goal is simple: Find over/under win totals that look terribly out of whack, take advantage of those inefficiencies, then bet as many Gummi Bears as you can muster.

Team Grantland went 3-1 last year, winning on the Tigers (under 93½ wins), Cardinals (over 85½ wins), and Rays (over 87½ wins), and losing on the Dodgers (under 81½). I typically like to take a few weeks to round up intel before placing bets, breaking down every team’s depth charts, perusing the various projection systems, and weighing about 500 other factors so nerdily microscopic, you’d have me committed if I listed them all. Since we’ve only had about 36 hours to peruse the lines put out by Atlantis Casino sports book director Steve Mikkelson, and since I’m not planning to make any wagers until my trip to Vegas next month, it’s too early to settle on bets for the 2013 season. But going through Mikkelson’s list, we can start a process of elimination — bets that, whether due to a particular team’s uncertainties, or simply the line matching up pretty well with projections, just aren’t worth risking.

The first thing that jumps out at you is the nod toward parity. This is my seventh year betting on MLB over/unders (I used to stick to just one team a year; now the target range is two-to-four high-confidence wagers). In all those years, I can’t ever remember a case where not a single team was pegged above 90 wins. Mikkelson is just one man, and the Atlantis is just one casino in Reno, so we should expect many of these lines to differ and to move at other sportsbooks between now and Opening Day. Still, having 27 of the 30 teams compressed between 71½ and 90 wins catches your eye and immediately compels you to consider extreme bets on the high or low side. I’m generally reluctant to make bets like those, since a lot has to happen for a team to top 90 wins or 90 losses, with even very good and very bad on-paper clubs often deviating from the script (refer to those 2012 Tigers on that front). On the other hand, if you’re convinced the Nationals are the class of the National League, or that the Astros won’t win five more games than they did last year after jettisoning pretty much all the established veterans they had left, then those could be intriguing plays.

For now, we’re not here to cover the wagers that look good. We want to eliminate a few to make the process of choosing a few best bets easier. Here then are three lines I’m not touching:

Braves 86 wins
Say this much for the Braves: By handing out the biggest contract in franchise history to one Upton brother, and making a blockbuster trade for the other, they threw off the shackles of hara hachi bu. It’s easy to get seduced by the brothers’ potential, particularly in the case of Justin, a 25-year-old masher one year removed from a monster season. Throw in young stars like Jason Heyward and Craig Kimbrel, and the Braves would seem to have the horses for a potential pennant run. Pretty much every person in the state of Georgia tweeted me after the lines came out, vowing to plunk their kids’ college funds on the Braves over 86.

But a big season is no lock, given what the Braves have lost. You might take Justin Upton’s potential over the next three years over the key major leaguer Atlanta gave up in the deal, Martin Prado. But in Prado, the Braves lost a player whose .301/.358/.438 line, combined with excellent durability and great defense, made him a 5- or 6-win player in 2012, depending on your preferred defensive metric. Michael Bourn’s league-average offense, combined with his elite baserunning and Gold Glove–caliber center-field play, translated to another six wins above replacement for last year’s Braves. There were subtler losses too, such as David Ross, arguably the best backup catcher in the game. Since Brian McCann’s shoulder surgery has him doubtful for the start of the season, and Ross’s replacement, Gerald Laird (career .244/.303/.359 hitter), is rather punchless at the plate, Atlanta will carry two black holes at the bottom of its lineup. Hell, maybe three. You couldn’t project a .287/.377/.455 line for Chipper Jones were he to return in 2013, but that’s what he gave the Braves last year; his primary replacement, Juan Francisco, has pop, but also a .303 on-base percentage in his relatively short big league career. And that’s before we touch the Braves’ starting rotation, which finished a mediocre 14th in FIP last season, and that was with Kris Medlen putting up a random 12-start stretch from the Sandy Koufax collection that has no chance of happening again.

It’s certainly possible that the Braves win 90-plus this year … and it’s also possible that they win 83, if the Uptons don’t improve this year, the starting rotation remains middle of the pack, and the losses of Bourn, Prado, Ross, and Chipper come back to bite them. Too much potential variance here for me to feel comfortable.

Cardinals 85½ wins
Loved St. Louis at this exact same number last year; not so much this year. The Cardinals’ impressive young starting pitching depth is about to get a huge test, given all the attrition facing this staff. Barring a last-minute Kyle Lohse signing (which I’ve lobbied for since about December), the Cards’ staff faces the following challenges: the loss of Lohse after his career-best 2012 campaign; the likely end of former ace Chris Carpenter’s career; Jaime Garcia’s gimpy shoulder; and possible regression for slop-throwing 35-year-old Jake Westbrook. Granted, Garcia missed a good chunk of last year, Carpenter pitched just 17 innings in 2012, and dynamic young arms like Shelby Miller’s and Trevor Rosenthal’s may well be ready for bigger roles this year.

Meanwhile, the offense was one of baseball’s best last year. But an aging, gimpy Rafael Furcal and the pedestrian Daniel Descalso could hurt the team’s production, and acknowledging the high-BABIP proclivities of several batters, you wonder if the Cards can repeat last year’s .316 batting average on balls in play, best among all teams that don’t play their home games at Coors Field (the Cardinals’ team BABIP was .305 in 2011, .296 in 2010).

Thinking about shorting the Cardinals? Miller and Rosenthal could join Lance Lynn and Adam Wainwright as anchors of a dynamic, younger staff, and Allen Craig feels like a 35-homer guy waiting to happen if he can finally stay healthy for a full season. Gun to my head, I’d favor a slight over. But there are tons of better bets on the board.

Brewers 79½ wins
One of several middle-of-the-road teams with near-.500 projections that aren’t worth your wagers. PECOTA has the Brewers at 79 wins, CAIRO has the Brewers at 79 wins, and Clay Davenport’s projection system says 78. A Ryan Braun suspension or drop-off in numbers could be enough on its own to make an Under bet intriguing. So, too, could regression for Aramis Ramirez (.300/.360/.540) or Jonathan Lucroy (.320/.368/.513), or Corey Hart’s injury keeping him out longer than the predicted late-April target. On the other hand, Mike Fiers and Marco Estrada have intriguing upside if they can churn out 200 innings each, and the bullpen can’t help but improve after an MLB-worst 4.66 ERA in 2012. The Pirates and Phillies, both projected right near their over/under numbers, look like similar stayaways.

Stay tuned for more over/under odds, including the Vegas benchmark LVH this weekend. We’ll check back next month with 2013 wagers.