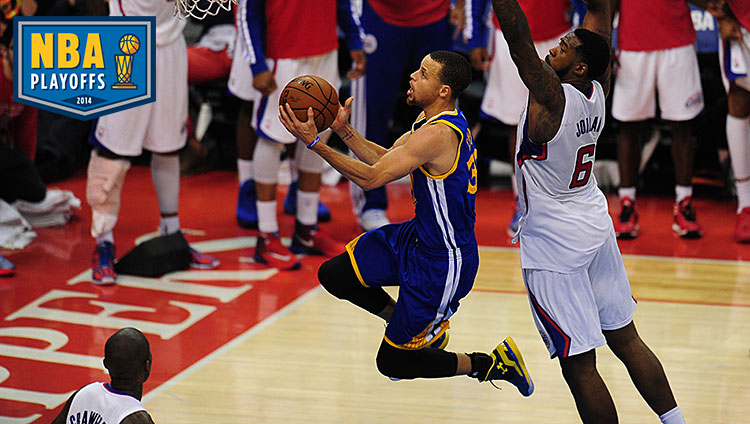 Even before the Clippers found themselves trailing by 10 in the first quarter of Game 7, Golden State had the first strike. Warriors fans made their way into the arena first, or at least that’s what it seemed like. A particularly large cluster had formed in the 106 section of the lower bowl. They waved yellow towels and acknowledged each other from the different sectors of the arena, as if they were all in on a larger plan. They had a great pregame chant, “WARRIORS,” with the “a” sound dragged out for so long that the rest of the word was almost forgotten. Maybe it was the acoustics of the mostly empty arena, but it sounded something like, “Waaaaaaaaaaaaah-urrrrs.”

As Clippers fans began to populate the arena, I noticed familiar characters and new ones. Clipper Darrell, the most dedicated Clippers fan in existence, arrived early, clad, as always, in his Two-Face red-blue suit. Sitting directly behind me was a white guy with broad-frame spectacles, a fake mustache, khakis, and a blue argyle sweater vest. The Staples Center guest services workers in purple properly addressed him as Cliff Paul. The newbie seeked validation from the veteran. As Clipper Darrell walked up to his usual perch, Cliff Paul called his name out. Darrell’s head turned. He smiled, then walked over to give his new ally dap.

Then you remember the past few decades (and really, the Clippers never let you forget) the team has endured since taking on the Clippers name. As the game went on, the stakes became more apparent. History, in this context, was breaking the curse; it was the hope of creating a stepping stone for an honest-to-goodness winner’s history to take shape. History being made meant history choosing not to repeat itself.

Can we talk about that sequence? With just more than two minutes left in regulation, Steph Curry slithered past three Clipper defenders, courtesy of a high screen set by Draymond Green. Jamal Crawford and J.J. Redick were flanked on the two wings; the lane was wide open. Curry, in a moment of flourish, pumped the ball toward his body before laying it in, expecting to be home free.

The problem was that the last defender he squeezed past was DeAndre Jordan, whose blast radius, in terms of erasing shots and catching lobs, is as close to infinite as we can get without needing an astrophysicist on hand. Jordan is all arms, all legs, all torso, and three seconds into Curry’s drive, he was all-encompassing.

Freeze the frame. With such an open lane, Curry had two options: lay it up on the strong side, or reverse the ball and lay it in on the right side. He stayed left, just as Jordan predicted.

Jordan went airborne, completely eclipsing Curry from my vantage point at Staples Center, looking like the generic angel perched on top of every trophy you ever won in your youth. Notice his hands. Each hand was on its corresponding side of the backboard. Sure, he guessed correctly and blocked Curry’s layup on the strong side, but he was completely prepared for the alternative.

It was the play of the night (coming in second: this Blake Griffin craziness, a portrait of his essence as an NBA player in one five-second burst) except it wasn’t over. Crawford caught the ball as it hit the floor and threw a lead pass to Redick, who lofted a 20-foot lob to Griffin for an easy finish. What would have given Golden State the lead turned into a four-point swing for the Clippers.

So then, where would this sequence rank among the greatest in Clippers history? It’s tough to say, but it shouldn’t be — and that might be exactly why it’s tough. Every team has a vault of its most unforgettable moments, but crack open the Clippers’ and what might you be staring at? The 27-point comeback in Game 1 of their first-round matchup with the Memphis Grizzlies in 2012? That’s probably it. Or maybe the Detonation of Mozgov. Broaden your search, and the most indelible memory in Clippers history is likely Shaun Livingston’s knee injury. That’s how bleak it’s been for the Clippers.

That isn’t to say the team has been dull. We all have our personal treasures: Sean Rooks to Lamar Odom to Darius Miles; Jamal Crawford’s midair, between-the-legs lob to Blake Griffin. Those are two of the most incredible plays I’ve ever seen in my life; the former is my favorite basketball play ever. But on the spectrum of meaningfulness, they’re both on the wrong side. Moments associated with the Clippers are blips of the bizarre and ecstatic, but most float away, untethered to an event significant enough to keep them within the orbit of our collective memory.

The Clippers haven’t lacked for memorable plays, but they’ve never had a defining moment. Until now. After decades of being the monthly screening of Tommy Wiseau’s The Room at the old Laemmle’s Sunset 5 to the Lakers’ red-carpet spectacle at Hollywood and Highland, the Clippers finally have the eyes of the city squarely on them. The Donald Sterling debacle, and the moral dilemma it presented both the organization and its fans, only intensified the scrutiny. But the team has handled the pressure as well as anyone could expect. “The one thing that stood throughout all this is we had the same voice,” Doc Rivers said in the postgame press conference. “We all said the same things. We all eventually agreed on our approach. One thought, one voice.”

Clippers fans had really outdone themselves with the noise after that incredible sequence. From my spot near courtside, I looked up at the crowd, from the 100 levels to the nosebleeds up in the 300s. So much had changed in the last three years.

I stared at the VIP section. Three years ago, before Chris Paul’s arrival, a fan from the nosebleeds could theoretically head down to the suite levels and sneak into the American Express Platinum Lounge (reserved for Platinum Cardholders only) without creating much of a fuss. The lounge was rarely close to capacity for Clippers games, so workers generally turned a blind eye to fans just “wandering in.” (Retroactive pro tip: Make your way in, and then sit next to the men in suits who’d just ordered the basket full of shoestring fries. They’ll leave the fries on the table like potpourri as they continue to talk about business. Wait until they grow bored and leave. Swoop in on the fries before the waiter comes to take them away. There is no chance this #lifehack still works today.)

But the main sign of change was something I didn’t realize I’d missed until the game was over. At a normal contest, Clipper Darrell isn’t just a presence, he is a force of nature. Three weeks ago, against the Kings, Darrell relentlessly heckled Reggie Evans (a former Clippers folk hero) with his famous U-G-L-Y chant, to which Evans responded with an equally affecting death stare. On Saturday, I didn’t hear Darrell’s voice until about five minutes after the final buzzer sounded.

Thirty minutes after the game, the scene outside Staples Center was peaceful. There were fans chatting with cops about the spectacle they’d just witnessed. A woman cried out to a fellow fan, “See you in Oklahoma City!” I don’t know if she meant that literally or not, but the idea of Clippers fans traveling to support their team is a new one. If you catch a red dot in a sea of blue in Game 1 or 2, I guess we’ll have our answer.

It was getting close to midnight, and there were still a number of Warriors fans loitering around L.A. Live. As one of them got caught in an existential tailspin, asking the group why they were even there, another grabbed hold of him: Because we love our team. Then came that “Waaaaaaaaaaaaah-urrrrs” cry. Then they talked about where to get blissfully drunk. Warriors fans were disappointed, but undeterred. They came down to L.A. on a Saturday night. Not even elimination was going to get in the way of having a good time.

Two minutes to midnight: Clipper Darrell walked into Yard House. Security guards gave him a nod. Darrell silently dapped a couple of Clippers fans who had walked in before him. Away from his stage at Staples Center, Clipper Darrell’s outsize personality retreated back to the stout 5-foot-5 shell it’s projected from. Heads didn’t swivel in his direction, fingers didn’t point. Clipper Darrell, just as he was two hours earlier, wasn’t the spectacle here. He was just another Clippers fan taking in the playoff cheer; one of many.

Can Joe Thornton Shake the 'Not a Winner' Label?

Premier Pass & Move: City Have the Inside Track, Fulham Are Going Down, and Everton Are Going to Eastern Europe