Can Joe Thornton Shake the ‘Not a Winner’ Label? 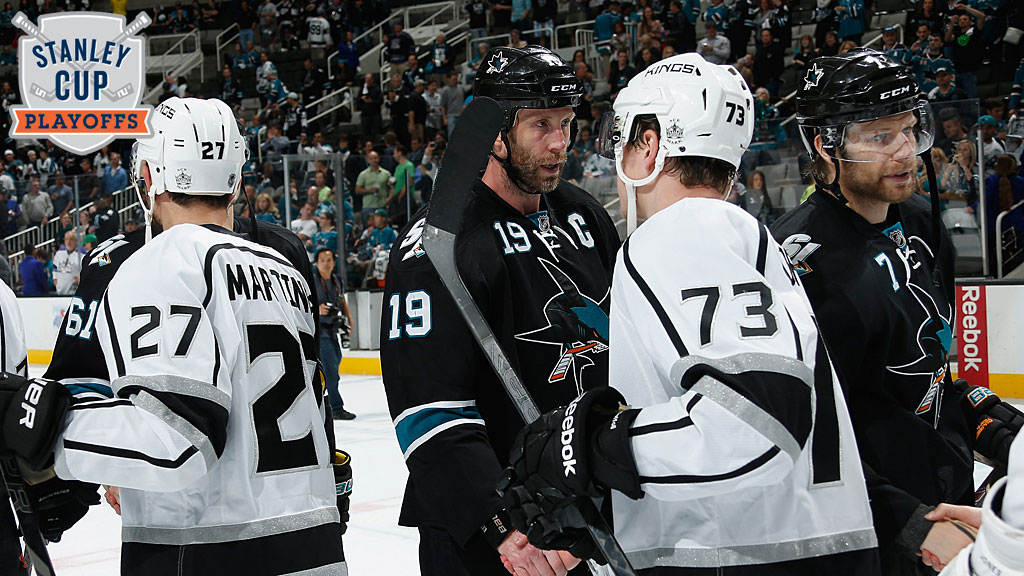 You have to give the San Jose Sharks some credit: Just when you thought they’d run out of ways to have their season end in disaster, they go and surprise you.

This year’s Sharks’ implosion came in the first round against the L.A. Kings, with San Jose becoming just the fourth team in NHL history to blow a 3-0 series lead. They lost four consecutive games by three goals or more and were outscored 18-5, including a 5-1 Game 7 loss on home ice. And once again, we’re all left to wonder why this team can’t win when it counts.

There’s no question the Sharks have been one of the league’s best teams for the past decade and a half. Since 1999, they’ve made the playoffs more times than the Penguins (14), won more playoff rounds than the Bruins (12), have more division titles than the Blackhawks (six), and been to more conference finals than the Kings (three).

And of course none of that matters, because those teams have won Cups and the Sharks have yet to even make the final. Consistency is a wonderful thing, except when you’re consistently not quite good enough.

And now the Sharks find themselves facing a similar decision as the St. Louis Blues: Do you stick with the core and try again, or blow it up and start over?

That decision will start with coach Todd McLellan, whose job was assumed to be riding on a long playoff run. GM Doug Wilson says he wants to keep McLellan, though a frustrated ownership group means that might not be his call.

Even if McLellan stays, the Sharks may decide that the roster needs a major shakeup. It’s already a hot topic among hockey fans and media, with opinions ranging from calls for “attitudinal franchise transformation” to doing nothing at all, and everything in between. Much like the Blues, standing pat doesn’t seem to be an option, while the risk of a catastrophic overreaction seems high.

But the situation in San Jose might be even more complicated, because the Sharks have something the Blues don’t: a longtime superstar and face of the franchise who’s earned a reputation for coming up small in big moments.

That would be Joe Thornton, the 34-year-old center who is heading into his 10th season in San Jose — if he makes it that far. Since the 2005 lockout, Thornton leads the NHL in assists, and only Alex Ovechkin has scored more points. But despite those totals, despite being a former first overall pick, despite his Hart and Art Ross trophies and six All-Star appearances, Thornton has been stuck with the worst label a hockey player can have: He’s not a winner.

That is to say, he’s a regular-season guy but not a playoff warrior. He’ll give you solid numbers, just no ring. He’s Pierre Turgeon, or Mike Gartner, or Pat LaFontaine, and those guys were all nice enough players. But it’s become clear that the Sharks need a winner. The Sharks need a Steve Yzerman.

And that’s where things get tricky, because this whole “winner” label can be complicated. Today, Yzerman is considered one of the greatest winners the game has ever known, thanks largely to the three times he lifted the Stanley Cup as Red Wings captain. But before he had a handful of rings, Yzerman had the reputation as the regular-season wonder who couldn’t win the big one. Steve Yzerman used to be Joe Thornton.

That sounds crazy now, but by the 1995-96 season, the Yzerman narrative had become so accepted that the Red Wings were actively working to trade him. They came very close to sending him to the Ottawa Senators in a deal that would have centered on Alexei Yashin. In one version of the story, Detroit’s front office had actually agreed to the deal before ownership stepped in and killed it.

Stop and think about that for a moment: There was a time when the Red Wings, one of the smartest organizations in hockey, thought their best path to a winning culture was to replace Steve Yzerman with Alexei Yashin. And despite what they’d no doubt swear to you today, plenty of Detroit fans would have been thrilled to see it happen.

Just more than a year later, Yzerman had his first championship, and all those questions about him being a winner were never heard again. Stanley Cups have a funny way of doing that. It’s almost as if “winner” isn’t so much the objective character trait we think it is, as it is a label we slap on a player in hindsight once all the bad luck has sorted itself out.

Yzerman ended up spending his entire career in Detroit. Thornton, of course, has already been traded once, in the 2005 deal that sent him from Boston to San Jose. That deal seemed like a laughable rip-off at the time it was made, and even worse when Thornton went on to win the Hart Trophy that year (the only player ever traded in the middle of an MVP season). But the Bruins have a Cup and Thornton doesn’t, so who’s laughing now?

Thornton is two years older than Yzerman was when Detroit finally broke through, so there’s no guarantee that time won’t run out on him even if the Sharks decide to be patient. And we haven’t even touched on Patrick Marleau, another 34-year-old who stands as the franchise’s all-time leading scorer but has also been saddled with the reputation of a guy who fades when it counts.

It’s not an easy call for a team to make, and it’s not an exaggeration to say it could be a crossroad for the franchise. If it decides to stay the course, we’re probably having this same discussion this time next year. That’s just how the odds play out, even for the very best teams.

But if Thornton and friends do get another chance, we could find ourselves talking about a Stanley Cup instead. As Yzerman would tell you, it only takes one win to change the whole conversation permanently.

We Went There: Tony Parker Cracks the Mavericks’ Code