The St. Louis Blues Collapse in the Playoffs, As Per Hockey Tradition 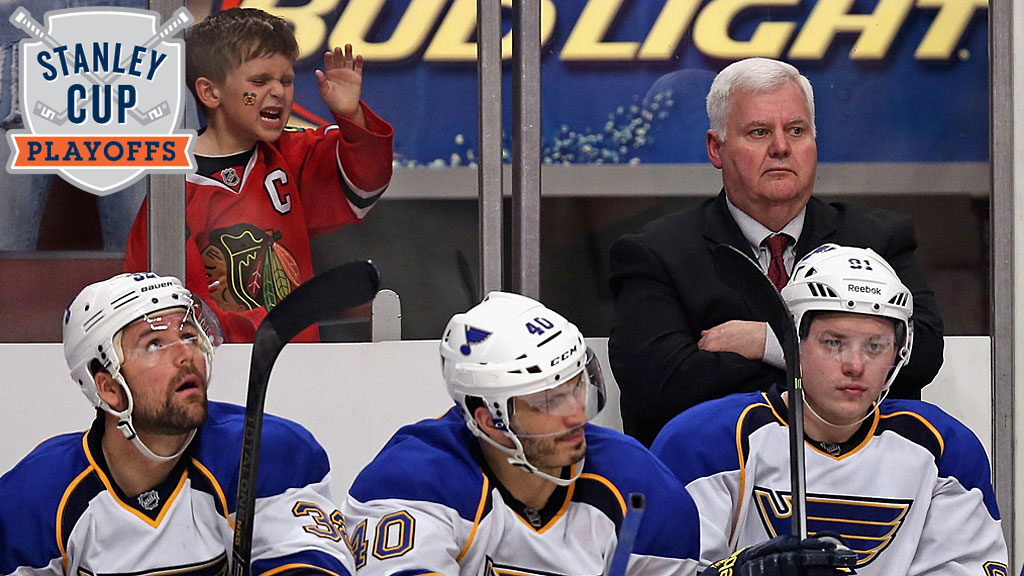 We’re now up to four teams eliminated from the first round of the NHL playoffs. But with all due respect to the Lightning, Red Wings, and Stars, only one team sent to the sideline so far has been a legitimate Cup contender.

That would be the St. Louis Blues, who took the opening two games of their series with the Chicago Blackhawks before dropping four straight. They were officially put out of their misery Sunday, after a third-period implosion turned a tight 1-1 game into a 5-1 loss that ended what has to be one of the worst months a team has had in recent NHL history.

With two weeks left in the regular season, St. Louis had entrenched itself as a Stanley Cup favorite. On April 3, the Blues edged the Buffalo Sabres 2-1 for their 52nd win of the season and moved into a tie with the Bruins for first place overall. They were seven points up on the Avs for first place in the Central and seemed set for a first-round matchup with the Wild or Stars, in which they’d be heavy favorites. And they were still riding high from acquiring goalie Ryan Miller in the trade deadline’s biggest blockbuster, a move that clearly established that the goal for this season was championship or bust.

One month later, “or bust” is skating a victory lap, while “championship” sits in the quiet room trying to remember what day of the week it is. What the hell just happened to the St. Louis Blues?

First things first: The cause of death on the postmortem will read “six games in April,” but it won’t be the six games against the Hawks. After all, there’s no great shame in losing to the defending champs, especially in a series that was essentially a coin flip (four of the six games went into overtime).

The real disaster came in the season’s final two weeks, when the Blues stumbled into that Chicago matchup by losing six straight to drop out of the top spot in the Central. The Blues were shut out three times over that stretch and didn’t even earn any loser points along the way, allowing the Avalanche to pass them in the season’s final week.

It’s amazing what a half-dozen bad games can do to the perception of a team. When they were challenging for the Presidents’ Trophy, the Blues looked like a deep, well-balanced team that would be immune to the sort of extended cold streak that can derail a top-heavy squad. Now that same roster looks like one that’s too short on star power to compete with teams like the Blackhawks.

And, naturally, plenty of fingers will be pointed at Miller. After a strong start, his numbers in St. Louis were unimpressive, and his .897 postseason save percentage will lead to plenty of second-guessing of the deal that made him a Blue. Should St. Louis have stood pat with Jaroslav Halak and used its trade chips to improve the offense instead? It’s easy enough to say in hindsight, but that sure looks like the better choice right now.

Whoever deserves the blame, this is a devastating loss for a franchise that desperately needed a long playoff run. The Blues have won one round in the last 11 seasons, and have been out of the second round only once since 1986. They’ve seen their season end by losing four consecutive playoff games each of the last four times they’ve made the playoffs. It’s not hard to look at their recent history and conclude that something is fundamentally wrong with this franchise.

That’s led to talk of major changes coming. Maybe they’ll look to ship out some core pieces, or maybe coach Ken Hitchcock walks the plank. Or maybe they go even deeper and start asking tough questions about whether there’s something about the overall philosophy that works in the regular season, but can’t get it done in the playoffs.

That’s a tempting road to go down, but it’s a dangerous one, and the Blues don’t have to look far to find a case study. In 2010, the Washington Capitals found themselves in the exact same situation the Blues are in now. They were Cup favorites who’d just lost in the first round (to the Montreal Canadiens, who rode red-hot goaltending from Halak). They had one playoff round win in 11 years. And they were dealing with the nagging feeling that there was something fundamentally wrong with them.

The Capitals made the decision to hit the reset button on the organization’s entire philosophy, shifting toward a more defensive approach that, they believed, would be necessary for playoff success. Four years later, it hasn’t worked, and on Saturday, the team announced the firing of Adam Oates. It’s the third time over this span that Washington has fired its coach. This time around, longtime general manager George McPhee went too. Looking back, it’s hard not to conclude that the Capitals overreacted to a tough playoff loss and torpedoed a potential Cup winner in the process.

That could serve as a cautionary example in St. Louis. (Or maybe the lesson is just don’t let yourself get spooked by Jaroslav Halak.) Either way, staying the course after this April meltdown is going to be a tough sell to Blues fans, who’ll spend the next few weeks playing armchair GM, second-guessing every roster decision, and (probably) reading way too much into every offhand comment. It’s not a fun place to be, and it’s one that was hard to imagine the Blues finding themselves in earlier this month.

Things can change quickly in a few weeks of the NHL season. Now Blues fans will see how much they can — or should — change over the course of a few months.

About Last Weekend: Bulled Over

NBA Playoffs Shootaround: Up in the Air