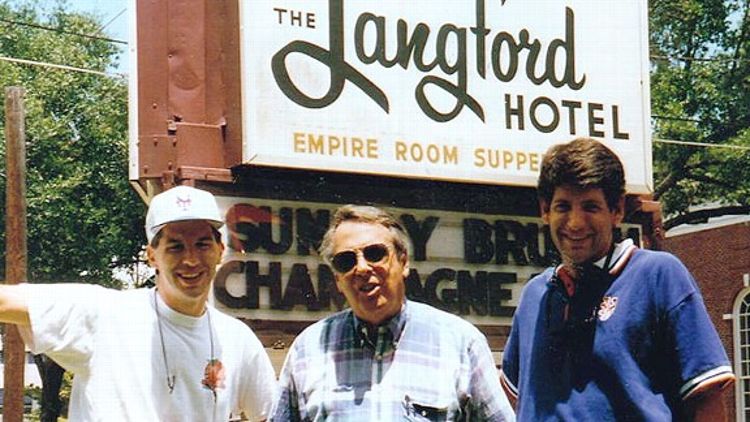 Rajai Davis had 34 stolen bases this year. I had no clue.

Josh Tomlin of the Indians had a 1.08 WHIP this year, 11th best in the majors. I had to look that one up.

I have never been a fantasy sports lover and those two statistics are two of the reasons why. I don’t want to be in a position where I HAVE to know those things. It’s just not for me. My favorite fantasy game is much more simple — a great way to follow baseball without all the heavy lifting. It’s called The Langfords. You have never heard of it because only four people know about it.

Come back three decades with me. My dad and I had driven to Winter Park, Fl., to visit my brother, Jim, at Rollins College. While staying at a hotel called The Langford, the three of us created a home runs-only fantasy league which we named … that’s right, the Langfords! Even though fantasy was just going mainstream at the time, we wanted to keep it simple — 10 players per person, one point for every home run hit by your team. The winner got a dollar per homer off the differential from the other two teams. That’s it. How long ago was this? I can’t remember the exact year, just that guys like Ron Kittle, Tony Armas and Kent Hrbek were some of our early contributors. We tweaked the rules over the years (and added an expansion owner in the late 1990s and my good friend and dad’s former student, Bill Simmons), arriving at our current format.

Anyway, this postseason was shaping up to be one of the most dramatic in Langford history. Heading into Round One, my dad was leading the way with 142 points; Bill was second with 131 (but had lost David Ortiz after Game 162); my brother and I were tied at 126. Here were our rosters (along with cross-offs for everyone who got knocked out in Round One):

Sixteen points is easy to overcome with our playoff format as long as you pick the right World Series teams. In 2005, I took the title when Paul Konerko hit a seven-point grand slam in Game 2 of the World Series. For the record, Simmons has been in the league for 15 years and won the Langford crown only once. Want to guess which year? You got it, 2004 — the year he stacked his team with David Ortiz and Manny Ramirez. A pretty good October in the Simmons Man Cave. He’s already blaming his imminent 2011 demise for his playoff draft blunder — picking B.J. Upton over Mike Napoli. Which was dumb at the time, by the way.

In Round One, my brother made an early move when Robbie Cano hit his grand slam in the LDS. I got some first round help from Howard, Granderson, Hamilton and Upton. Bill got an early boost from Adrian Beltre (the first Langford player ever with a three-homer game in the postseason). Heading into the Championship Series, our Langford standings had tightened: Dad,148; Bill,141; Jim,137; Me,136. But things look rough for Jim (only Pujols and Kinsler left) and me (just Hamilton). You know who was looking good? Simmons, with his triumvirate of Braun, Cabrera and Beltre.

And yet, my father — whose draft strategies are often ridiculed — is thinking about legally changing his name to Nelson Cruz Ramsey after Cruz’s two-homer game (including a grand slam) in the ALCS. With Fielder and Napoli aboard as well, it looks like my father’s title to lose. In fact, I’d like to congratulate him right now: congrats on your 2011 Langford title, dad. There’s no way you can lose

Meanwhile, they tore down the Langford Hotel in 1999. Not quite as depressing for my dad as when they demolished Ebbets Field, or for me and my brother as when they knocked down Shea Stadium … but it’s close. Thankfully its memory lives on in a simple yet enjoyable fantasy baseball league. Feel free to rip it off from us next season. You won’t regret it.

Gus Ramsey is a coordinating producer for ESPN. Follow him on Twitter at gusramsey or read his blog at gusramsey.blogspot.com