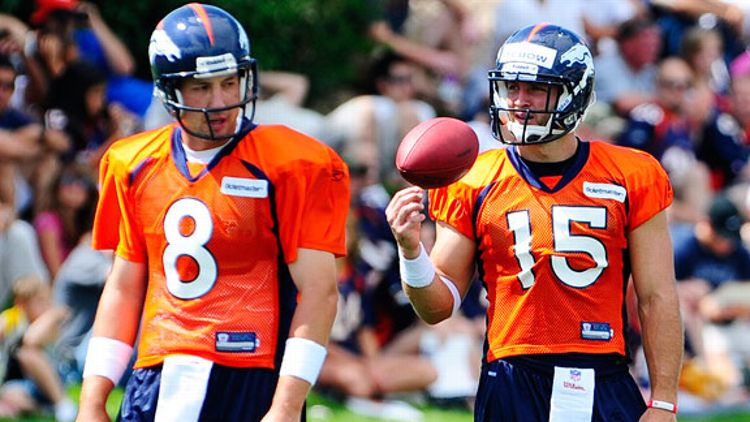 There have already been a few whispers of quarterback controversies in Seattle (Tarvaris Jackson vs. Charlie Whitehurst), Minnesota (Christian Ponder vs. Donovan McNabb, at least according to Ponder), and Miami (Chad Henne vs. whomever the Dolphins are trying to acquire on any given day). But the most mystifying is the one taking place in the Rockies, between Kyle Orton and Tim Tebow, for the chance to be the Denver Broncos’ QB1.

It’s not that it’s particularly surprising that Orton, a veteran game manager coming off a statistically stellar year (albeit one that yielded only three victories as a starter), would be setting the pace at Denver’s training camp ahead of Tebow and the forgotten man in this whole drama, Brady Quinn. It’s not Orton’s first rodeo, but it’s only Tebow’s second, and Brady Quinn … well he doesn’t seem to really like rodeos.

What is surprising is that Orton is being given the opportunity to outpace the other quarterbacks, particularly Tebow, in the first place. Because Kyle Orton was supposed to be a Miami Dolphin by now. The Broncos and Dolphins were close to a deal last Tuesday, but Orton reportedly scuttled the move due to the length of the contract he was being offered.

What’s even more surprising is how the Broncos have allowed the narrative to spin out of control since the Denver/Miami deal died on the vine. On Monday, Mike Kils Klis of Denver Post and Sports Illustrated’s Jim Trotter both wrote pro-Orton pieces, with Kils Klis saying Tebow was competing with Quinn for the no. 2 job and with Trotter reporting that veteran Broncos players are largely “Team Kyle.”

You could make the wildly speculative argument that the Broncos were letting Orton shine in the opening days of camp because it would increase his trade value. Here are the problems with that. First of all, John Elway and John Fox don’t seem like the type of guys who really play the press for their own gain. They seem like smart, professional cats, but they don’t strike me as manipulators of the modern media. Additionally, the problem was never Orton’s trade value (the Broncos and Dolphins had agreed in principle on a deal) — it was that Orton didn’t want to be traded in the first place.

Now it’s getting a little dicey in Denver. Elway — who in the spring called himself Tebow’s biggest fan — is now hedging his bets, saying: “Where we are right here is Kyle’s here, and the best guy is going to play.”

For a team coming off a 4-12 record, maybe it’s time to try the unknown, even if it’s someone as well-known as Tebow.