The Invisible Crown: Syracuse and Virginia Meet for the ACC Regular-Season “Title” 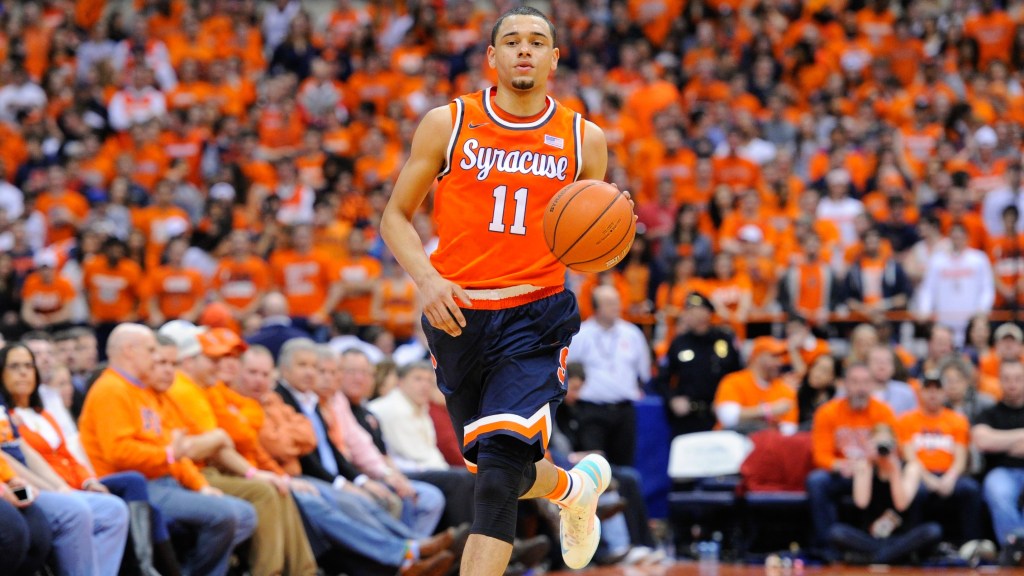 In July 1961, the bigwigs of the Atlantic Coast Conference got together in Greensboro and formalized the idea that the winner of the conference tournament would be the official ACC champion. That had always been the case, but in an era when only one team from each conference made the NCAA tournament (that changed in 1975), it was a point of major contention. So when the 1960 Duke Blue Devils entered the tournament as a 4-seed and beat regular-season cochampions Wake Forest and UNC in consecutive games, there were some dissatisfied fans in the state. A year later, Carolina won the regular season again but didn’t participate in the ACC tournament due to a one-year probationary ban for “improper entertainment and lodging” that led to the forced resignation of Frank McGuire and the hiring of his assistant coach, Dean Smith.

Needless to say, Chapel Hill wasn’t pleased with the tournament. At the ’61 conference meetings, the frustrated Tar Heel contingent raised a motion to declare the regular-season winner the conference champion and the recipient of the lone NCAA bid. The strategy made sense, since Carolina had a tendency to win regular-season titles and stood to lose the most in the less predictable atmosphere of a single-elimination tournament. And because that tournament gave every other team in the conference a puncher’s chance at an NCAA bid, it also made sense that UNC received absolutely no support. The rule was codified, and remains intact today. In the ACC, there is no such thing as a regular-season champion.

(For the record, the Ivy League is the only conference that still awards an automatic bid to the regular-season champion.)

The reality that necessitated such an extreme move in 1961 changed in 1975 when the NCAA tournament field expanded to 32 teams and the ACC had more than one berth. Now there are 68 teams, and the bylaw is even less relevant. The automatic bid will always go to the tournament champion, but there’s no need to deny the regular-season champion the recognition they deserve. Maybe that need arose to deny a Carolina power play in 1961, but even then, it never stopped Dean Smith from hanging regular-season championship banners. (UNC has always been a little obsessed with banners — after Duke won its second national title in 1992, tying UNC, the Tar Heels moved a 1924 national title banner awarded 18 years later by something called “The Helms Foundation” to hang with its ’57 and ’82 banners.) And in 1990, according to Al Featherston’s excellent article linked above, conference officials “authorized any school the right to hang banners for their regular-season ‘championships.'” In 2005, Roy Williams even had his team cut down the nets when the Heels beat Duke to win the regular-season title.

So if everyone else recognizes the regular-season champion, why won’t the ACC get on board and make it official? None of the other major conferences have the same hang-up, and by clinging to a bizarre piece of history, the ACC fails to recognize a key facet of sports — winning a regular-season title, as I’ll show in a moment, is the best measure of a team’s overall success. In Europe, a league title in soccer is valued just as highly, if not more so, than winning the Cup competition (a “playoff” that runs concurrently with the regular season, rather than at the end). The finish may be less dramatic, but it’s more representative. Even American sports used to emphasize the regular season; there wasn’t an NFL championship game until 1933, and in baseball, the league pennant wasn’t always totally overshadowed by the World Series.

Our sports today are geared to a postseason, and while it’s definitely more exciting that way, it tends to devalue the accomplishments of the regular season and reward teams that get hot at a certain time of year. (I went into this in greater depth last year.) Still, that’s an element of sports that won’t change, and maybe it shouldn’t. But the problem is magnified in college basketball because in the current 68-team NCAA format, the ACC tournament is, for most good teams, pretty meaningless. It’s sandwiched between a grueling regular season and the single-elimination bracket that actually matters, and as the NCAA field expands, major conference tournaments diminish in status every year.

You only have to look at the winners to see the absurdity of the situation. Mike Krzyzewski has always emphasized the ACC tournament, and it’s why Duke has won 10 of the last 15 titles. But has Duke truly been the best team in the ACC 10 of the last 15 years? No way. In that same period, the Blue Devils have won just four outright regular-season titles and two splits. For comparison, North Carolina has won five and split two, but it rarely wins the conference tournament because Roy Williams places far less importance on it. And what about the ACC tournament as a retroactive predictor of national titles? Since 1990, ACC teams have won eight national titles. Of those eight teams, only three won the conference tournament the year of their NCAA triumph. That’s less than half. But how many won the regular-season title? All eight.

Keeping those facts in mind, it looks even more ridiculous that the ACC still places its tournament champion above the regular-season winner. I have no problem with the two championships standing on equal footing, even though one clearly comes with more postseason value. But to have the lesser title in a superior position, when coaches like Roy Williams sometimes don’t even take it seriously when they have a team capable of winning a national title, is a farce.

All of this brings us to Saturday and the Syracuse-Virginia game in Charlottesville that will almost certainly decide the ACC regular-season champion. Tony Bennett’s Cavaliers have steamrolled through the conference, going 15-1 and coming within one fluke bounce at Cameron Indoor Stadium of a flawless record. The current run followed a pretty mediocre pre-conference schedule, which included losses to VCU and Green Bay, a 38-point offensive showing against Wisconsin, and an embarrassing 87-52 setback to Tennessee. Something clicked in a big way for the Cavs starting in January, and they now boast one of the country’s best defenses and two offensive stars in Joe Harris and Malcolm Brogdon (who, despite UVa’s slow pace, has not been held to single digits in ACC play).

Syracuse, on the other hand, has suffered the opposite trajectory. After looking like world-beaters and rising to no. 1 in the country after a 20-0 start, the Orange have spent February playing close game after close game against good and awful teams alike, and have lost two of their past three to drop to 13-2 in conference. And when they meet Virginia, they’ll be underdogs. Both teams play slow, though, so it’s likely the game will be close, and everything is setting up for a classic defensive war of attrition.

Now, to argue against myself for a moment, there’s a problem with this particular regular season. Beginning in 2005, and for the first time in 50 years, the ACC’s schedule became imbalanced; there were simply too many teams for everyone to play twice. Virginia has been a huge beneficiary in 2014, facing the following teams twice: Notre Dame, Florida State, Virginia Tech, and Maryland. None of those teams are in the top six in the conference, while Syracuse has had to play Duke and Pittsburgh twice, and will have to face Virginia on the road. But over the course of 18 games, the handicap is minor, and the Orange still have a chance to win a title. If the Cavs hold serve at home, I consider the 16-1 record a legitimate reflection of their season. And even if you find that flaw unfortunate, a regular-season title with an asterisk still beats honoring a tournament that has lost its meaning and functions as little more than a fun appetizer to the big dance.

ACC basketball fans are excited to see Saturday’s game, but there’s almost no hype in relation to the title that’s at stake. That’s partly a product of our sports culture, but it’s partly the ACC’s fault. It’s been more than 50 years since North Carolina tried to stack the deck in its favor in Greensboro. The issues that motivated a bold decision then have been obsolete for decades, and the conference tournament is secure. So why are we stubbornly hanging on to an outdated policy? The sport has changed, and it’s time for the ACC to stop sabotaging its own regular season.