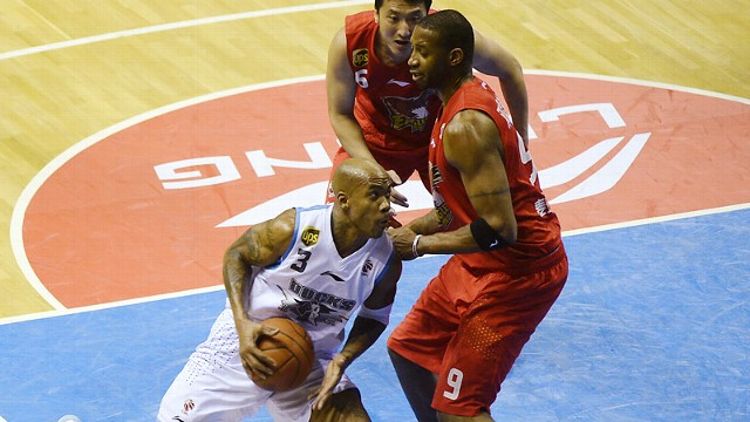 Order was restored in the Chinese pro basketball universe last night when the Guangdong Tigers finished their sweep of the Shandong Lions to claim their eighth Chinese Basketball Association (CBA) title. This was probably the most competitive game of the series, which basically means that there was a 10-minute window in the first half when it looked like the underdog Lions weren’t going to get blown out. I had begun following the CBA playoffs while in China the past few weeks, but I watched the final game this morning on a Chinese website. I was familiar enough to recognize a few things: “Tear It Up” will inevitably play during timeouts and Yi Jianlian will not lose. His Tigers have now won the CBA eight of the last ten years.

From an American perspective, it’s hard not to approach something like the CBA as a novelty, the alien setup where Stephon Marbury is a hero to millions. Most international pro basketball leagues seem delighted to court minor celebrity, guys who played on the same team as someone everyone knows, and relevance-by-proximity is certainly the case in the Chinese Basketball Association. Tracy McGrady, after all, remains a huge star in China — at one point, his jersey actually outsold Yao Ming’s. But in the CBA, there’s also a slight protectiveness, an unwillingness to bend too far simply to court the West’s surplus stock. J.R. Smith witnessed this firsthand during his stint in the CBA when his team refused to coddle their high-paid star. You could even argue that the Bayi Rockets’ brawl with Georgetown embodied a broader shift in attitudes, now that China no longer needs to act in an overly deferential way toward the United States.

It says a lot about China’s self-regard that the CBA aggressively (though ultimately unsuccessfully) fought perceptions that it was just a place to cash a quick check during the NBA lockout. Professional basketball leagues abroad have never been as strong as they are now, partly because the rest of the world has never been able to offer American talent such competitive wages or benefits. While it’s supremely unlikely professional basketball will ever come to resemble soccer’s shapeless confederation of post-national playboys, it’s inevitable that some obscure petro-overlord or rare-mineral magnate will soon attempt to build a dream team somewhere you’ve never heard of.

Not that the quality of play in the Chinese example has begun to reflect some (I’m deeply sorry) great leap forward. Shavlik Randolph was the league’s top scorer this season. Donnell Harvey averaged nearly 17 boards per game. CBA games aren’t beautiful exhibitions of team ball, and any lame stereotypes about the Chinese penchant for mathematical precision or hardworking passivity quickly dissolve after a few minutes of errant hacking and five-a-side one-on-one. (You can watch a lot of highlights on the CBA page of the Chinese national television site.) It’s a style of play that rewards fast guards and, given the seemingly arbitrary nature of the officiating — insert joke about Chinese political authority — unflappable bigs down low. Watching the semifinal series between Beijing and the Shandong Lions (a.k.a. the Flaming Bulls), it was hard not to be taken with Zaid Abbas, a versatile, energetic Jordanian forward who seemed happy to do unglamorous things like play defense and get rebounds. In recent years, the CBA rule allowing the bottom five teams to field an extra non-Asian player — currently each team is allowed two imports — was nicknamed “Abbas’s Law,” since whatever team signed him seemed to excel in the playoffs.

It feels significant that the CBA finals consisted of two squads largely bereft of imported stars, unless you consider the Tigers’ Ike Diogu a star. The Lions are built around Abbas, former Iowa State star Jackson Vroman, and the inscrutable, fleet-footed guard Pooh Jeter. The Tigers feature Diogu, former Texas A&M guard Donald Sloan, Yi, and the faintly swaggy Chinese marksman Wang Shipeng as their current core. (Terrence Williams left the Tigers shortly before the playoffs.) Yi is the face of Chinese basketball in the post-Yao era, and his presence gives Guangdong a good chance of surpassing Bayi’s current record of eight CBA titles. His face is front and center on all the CBA posters, he featured in the latest, China-courting Nike commercial, and his is the only all-star replica you can buy in stores. But it’s Stephon Marbury who continues to embody a new possibility for the CBA, within China but also as a global entity.

After leading Beijing to its first title last season, Marbury was rewarded with a statue in front of the stadium. I tried to see it while I was in Beijing but, upon arriving at the stadium, I was devastated to find out that it was inaccessible to fans on non-game days. But Marbury was everywhere — on billboards, TV, newspapers. He’s more active on China’s social networks than on Twitter, and a recent photo he posted alongside brother-from-another-mother/dynastic era Liang Qichao went viral among Chinese Marbury look-alikes. Marbury’s become an elder statesman for many of the American players in China and a warm, willing, and thoughtful studio guest on CCTV (China Central Television, the state broadcaster).

I watched on CCTV as a scrappy and superior Shandong team swept his Ducks. His game was familiar: those shoulder-first drives, the creative finishing, zinged passes when he felt like it. But it was strange to see Marbury so selfless and seemingly placid, even as he was the target of Shandong’s smothering double team. He would get battered on his way to the rim, yet his appeals to the refs were respectful and polite. He kept trying to get the rest of his team involved even though he was clearly a class apart. On the defensive end, Beijing had no answer for Jeter’s quickness or Abbas’s tenacity. The series was never all that close. “My soul aches right now,” Marbury wrote of the sweep in his last installment of “Starbury News,” his heartfelt and occasionally engrossing column for the China Daily, “and it is hard for me to accept reality.”

It’s easy to remember Marbury as he was in the NBA, a radiant talent and erratic personality. Whenever he speaks or writes about his time in China (as on this gracious Starface TV interview from last summer or this sit-down with legendary talk-show host Yang Lan), he comes across as a wide-eyed innocent, kind of like a backpacking expat or study-abroad student who woke up one day and realized he would never be the same. But Marbury seems to have assimilated as a Beijinger; at the very least, he has far exceeded anyone’s expectations. He goes to the soccer matches, takes the subway, eats at local restaurants. He’s not the first American basketball player to go overseas and essentially remake and/or “find” himself. But he’s certainly one of the most unlikely. This fall, he will serve as a coach for Beijing’s entry in the China National Games. (There’s a CCTV video report here.)

Then again, even local fans are dubious about the CBA’s long-term appeal, particularly if teams begin recruiting a less flashy, more complementary style of overseas player. Marbury’s team-first approach is rare among CBA imports. Neither Gilbert Arenas’s Shanghai Sharks nor Tracy McGrady’s Qingdao Eagles fared particularly well this season, and it seems extra depressing for T-Mac sympathizers that his team actually finished in last place. Yet the CBA, like most international leagues, relies on being able to lure the occasional recognizable name.

I stopped in a Li-Ning shop one afternoon and finally found some jerseys for friends back in the States — Arenas, McGrady, Marbury, even Randolph Morris. “It’s a big night in Beijing,” the clerk, a disarmingly chipper young guy with hair dyed burgundy, remarked as I flipped through the Marbury jerseys. That night Beijing was playing in Shandong in the CBA semifinals and Guoan, the local soccer club, was playing Hiroshima in the Asian Champions League. He eventually realized I wasn’t a local. When I told him I lived in New York, he seemed surprised I was bothering with CBA jerseys when I could just follow the NBA. I don’t know how to say “novelty” in Chinese; the closest approximation I could summon was that I wanted these jerseys because they were “fun.”

He was a massive fan of the Heat, though he was careful to point out that he began liking them before everyone else did. I pointed at the Dwyane Wade posters all throughout the store and asked if he had heard the rumors that Wade’s megabucks contract informally stipulated that he play a year at the end of his career in China. “Impossible,” he protested. When he gets older, I suggested, anything is possible. “He’s too good for the CBA. Even when he gets older … it’s impossible.”