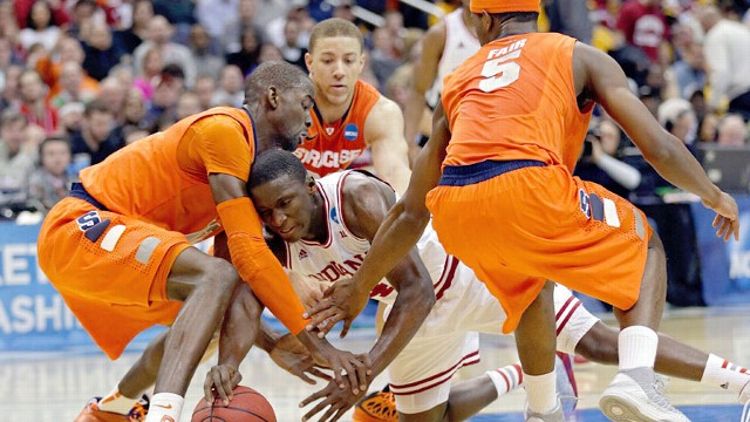 Yet another 1-seed found an early exit in the tournament last night. This time, it was the Indiana Hoosiers who met their fate at the hands of the Syracuse Orange and their famous 2-3 zone.

On a macro level, three things typically beat a zone defense: offensive rebounds, 3-point shots, and transition baskets. Indiana largely failed at all three in their defeat last night. The Hoosiers only made three shots from beyond the arc and had only 11 offensive rebounds (four of which came on one possession and didn’t even result in a made shot). Both of those figures actually fall below their respective season averages of 7.3 and 12.2.

Indiana found some success attacking Syracuse before the Orange could set up in their patented zone, but it was largely a mixed bag. The Orange did a fine job defending in transition last night, greeting the Hoosier break above the 3-point line and forcing wild forays to the rim, like these from Victor Oladipo that resulted in turnovers more often than they did made baskets.


There were two primary problems with Indiana’s attempts to attack quickly in transition. The first was the absence of a composed but aggressive primary ball handler to lead the break. Head coach Tom Crean allowed any and all of his guards to “rip-and-run,” but while Indiana’s guards and wings, Oladipo in particular, are largely good finishers on the break, none showcase a great understanding of pace and discipline when playing at high speeds.

The second problem with the emphasis on transition was that the Hoosier fast break seemed to only target attempts at the rim. While those types of shots are of higher value, looks from outside the 3-point line are often the easiest to find in the early seconds of a possession. Had Crean put an emphasis on seeking good looks from behind the arc in transition, Indiana may have been able to take and make more of those shots on a night when clean looks from long range were hard to find deeper in the shot clock.

In the half court, the Hoosiers seemed content to go with a zone offense that featured lots of side-top-side ball movement with the high and low posts filled in an attempt to overload the strong side. Because so many long, athletic players fill out Syracuse’s aggressive 2-3 zone — one that also features traps on the wing and short corner — passive ball movement around the perimeter plays right into their hands. Against less athletic zones, this basic scheme may have been the ideal strategy, but trying it against Syracuse was a disaster and led to 18 Hoosier turnovers.

That scheme choice by Crean also led to a number of high-post catches for his star center, Cody Zeller. But Zeller was completely overwhelmed in that area of the floor as the length, size, and quickness of Syracuse’s interior defenders, particularly Baye Keita, in very limited space (Zeller was basically playing one-on-three in an area the size of the lane) gave him loads of problems when he tried to attack from that spot on the floor. This offense also made it impossible to score quickly during the final third of the game, when Indiana badly needed good, quick shots.

Though Will Sheehey ultimately draws a foul on the play, the Hoosiers wasted nearly the entire shot clock before it happened.

While the team did try to ball-screen the top of the zone, a solution for the Hoosiers might have been running more ball screens with the specific intention of countering the aggressive zone by throwing back to the weak side. When Indiana actually did run pick-and-rolls, their guards often blindly pushed the ball toward the front side (strong side) of the play, feeding right into Syracuse’s overload principles.

By having their guards swing the ball back behind the screen, Crean could have instructed a perimeter player to attack a gap, shoot a 3, or enter the ball in to Zeller after his roll gave him deep post positioning.

The problems for the Hoosiers weren’t all on the offensive side of the floor, either. As result of a combination of both poor planning and poor execution, Brandon Triche and Michael Carter-Williams carved up the Indiana defense in middle pick-and-rolls.

It certainly didn’t help that Carter-Williams picked a bad time (if you’re Indiana) to find an outside shooting stroke (the sophomore guard drained two long 2s and two 3s last night despite being a poor outside shooter), but regardless, the Hoosiers just couldn’t stop this action enough to stay in a game in which they were struggling to score.