The Huddle: The Locker Era and the Eddie Bauer Inside Andrew Luck’s Locker 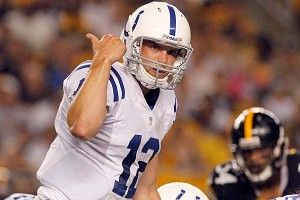 The loss of Vincent Brown

For most of his time in San Diego, Philip Rivers hasn’t exactly been flush with weapons. This year — with Vincent Jackson’s bolt to Tampa Bay, one more year removed from losing Darren Sproles, and Ryan Mathews’s perpetual spot on the injury report — it seemed Rivers might have as tough a time as ever. And that was before the Chargers lost Vincent Brown. The second-year wide receiver broke his ankle on a touchdown catch against the Cowboys on Sunday, brutal news for a player whom one Chargers veteran described as “our best receiver.”

Originally thought to be lost for the season, reports are now saying that Brown could be back in as little as eight weeks, and the Chargers plan to keep him on the roster. Still, this leaves Rivers with one less target on the outside, and although the word out of Chargers training camp is that Antonio Gates looks as good as he has in years, there’s no doubt that this was a break San Diego could ill afford.

Luck’s second preseason start seemed pretty typical for a rookie quarterback who also happens to be the best quarterback prospect in a couple decades. To go along with an early interception that was returned for a touchdown, Luck showed incredible touch and placement on more than a few passes and exhibited command over a Colts offense that shouldn’t be limited at all in how complex it can be with a rookie quarterback.

I didn’t have a problem with either of his two interceptions (the second being almost entirely the fault of his receiver), but rather with his postgame fashion choices. I understand the new CBA was particularly hard on the salaries of top 10 picks, but it still feels like Luck should be able to spring for something better than Eddie Bauer.

Another scary moment for Austin Collie

On a much more serious note from the Steelers-Colts game last night, Austin Collie again experienced concussion-like symptoms after a big over-the-middle collision with linebacker Larry Foote. As the conversation about head injuries has gotten louder in recent years, Collie is the active player who’s been at the center of it. After a promising rookie season and a solid start to his second, Collie was placed on IR late in the 2010 season after two scary hits to the head in less than six weeks. He played in all 16 games last year without incident, but the latest frightening moment brings up the same question that has to be asked about players like Jahvid Best: At what point is the damage compounded to a level that makes these new injuries inevitable?

Jake Locker will reportedly be the Titans’ starting quarterback in Week 1 against the Patriots. The news isn’t much of a surprise considering the reports that had come out of Titans camp last week. Locker had shown marked improvement early in camp and was impressive in relief of Matt Hasselbeck in the team’s preseason opener against the Seahawks. With Tennessee not likely to be a playoff team this year, it would make sense for them to start seeing as early as possible whether Locker is the answer going forward.

Well, it didn’t take long. Just a few days after getting to training camp, Justin Blackmon was hauling in his first NFL touchdown in Jacksonville’s preseason win over New Orleans. Blackmon’s performance — four catches for 48 yards and that score — may not be a surprise, but to many, Blaine Gabbert’s performance in the Jags’ first two preseason games certainly has been. Gabbert was clearly the most disappointing of last year’s group of rookie starters that included Andy Dalton and Cam Newton, and with Maurice Jones-Drew looking like he might continue his holdout into the regular season, Gabbert’s improvement was the most pressing issue for Jacksonville.

Gabbert has been steadfastly supported by his new coach (“Never challenge his toughness. I will fight for that”), and if anything can be taken from his two short stints this preseason, it’s that the discomfort Gabbert showed in the pocket last season is starting to dissipate. He’s looked more comfortable against the rush, and nothing could be more welcome news for Jacksonville.

Respect to Cole Beasley for doing his best Willie Beamen impression and representing for pregame pukers everywhere on Saturday night. The undrafted rookie wide receiver caught seven balls for 104 yards against San Diego, but the highlight came when he nearly threw up all over Dez Bryant’s shoes after making a big catch. Big ups, Cole. Make sure you bring flowers when you go to dinner at Al Pacino’s house.