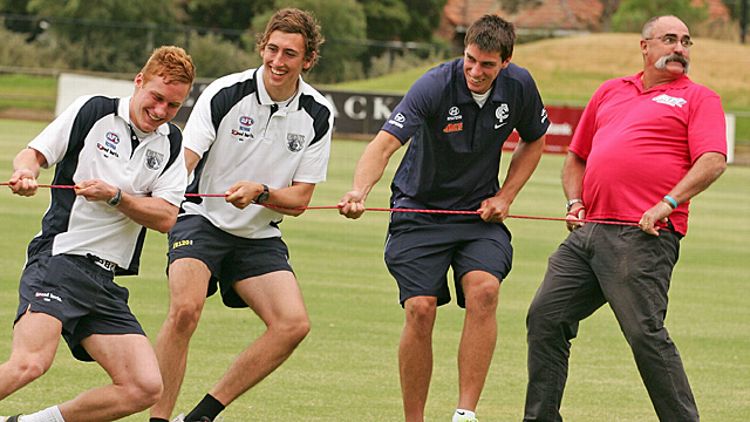 In Part II of Bill Simmons’s mega Olympics mailbag, a reader named Scott Stone proposed the reintroduction of tug-of-war to the Olympic Games. So passionate was the response from Bill and others to this proposal, we wanted to give Scott a forum to dive deeper into the wonderful, hypothetical world of Olympic ToW. Take it away, Scott.

The thing about tug-of-war is that it doesn’t really measure strength — it measures effort. Once you reach some minimum level of muscle (just enough to avoid getting pulled off your feet at the bell), the winning side is the side that gives up last.

Take the tug-of-war on Battle of the Network Stars. I don’t know how much time is on the “Fuck It!” meter of a Telly Savalas or a Penny Marshall, but I’m pretty sure it can be measured in seconds. I’m not even sure Telly is pulling — he’s just sorta leaning against the rope. By contrast, Robert Hegyes (Epstein from Welcome Back, Kotter) practically suffers a full-body hemorrhage leading his team to victory. He also has a good “pull face.” Like a closer’s facial hair, this cannot be discounted.

So I took a second look at Simmons’s tug-of-war team. And I realized someone was missing. Someone he hates. Someone who, even though this is probably impossible, would be able to demonstrate what the tug-of-war equivalent of “demanding the ball” might look like. Someone who is named after a city in Japan and a legume, but refers to himself in the third person as a deadly, venomous snake. Someone who lately seems unable to refrain from unnecessarily cussing when asked basketball-related questions by the media.

Here’s the thing: Kobe would lose all his fingernails and bite through his tongue before he’d let go of the rope (which apparently would please his wife, as this latest peek into the mature, functional world of the Black Mamba’s interpersonal relationships reveals).

LeBron should be on the team, too. That I can say this without hesitating is perhaps the greatest sign of the remarkable transformation he has undergone over the past year. I’m not sure I could put Durant on there just yet.

And so it occurs to me: This is a good, non-statistical way to evaluate athletes. Would you put them on the U.S. Olympic tug-of-war team?

Michael Jordan would have been a no-brainer. But not Scottie Pippen (I hate this; he’s my favorite player). Not Charles Barkley. But Karl Malone seems like a good bet, which makes me sick.

On the other hand, athletes with what you might call the Lamar Odom Personality Type obviously cannot be trusted in these circumstances — i.e., other than a congenial willingness to walk fully clothed down the beach with a half-naked Kardashian in search of paparazzi, there is little, if anything, we can expect from you. It’s not that you’re not talented. You’re just not reliable. So, Michael Phelps, the jury is still out on you. Lochte, you too.

But Simmons is right: Abby Wambach is the ultimate mold for an Olympic tug-of-war champion. She seems like someone the late David Halberstam would have written a book about. Not as famous or as wealthy as some athletes. Doesn’t play in a high-profile professional league. But an incredible competitor (and responsible Twitter user, which should be a given but today counts as a bonus).

She also is the only person I can think of who could legitimately out-alpha Kobe. I can just see her, after practice, gently but firmly coaxing him down onto his back so she can rub his belly and feed him Kobe-Treats.