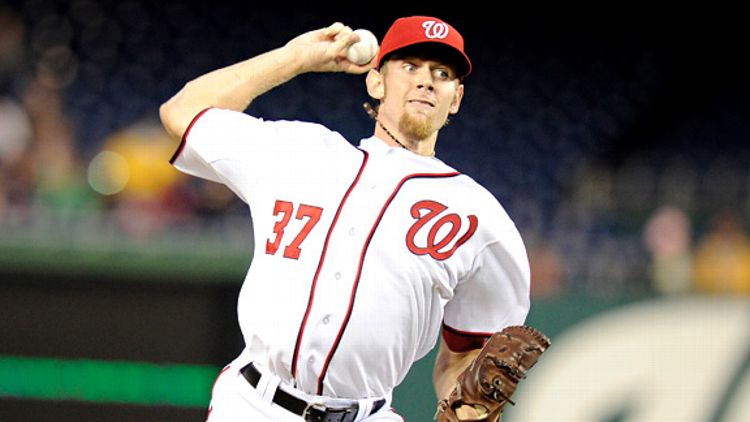 Andre Ethier had battled gamely against three blazing fastballs, a four-seamer at 97, another at 96, and a filthy two-seamer at 97. Now, he was set up. The pitcher reared back and fired, throwing from a nearly identical release point. Only this offering was anything but identical to the previous three. An assassin of a pitch, it started belt-high, then dive-bombed into the dirt in a flash. Ethier flailed wildly at it, caught nothing but air. Strike three.

In another era, you might have assumed it was a spitball or a shine ball, since pitches don’t usually move like that without a little help. But this wasn’t a product of Gaylord Perry’s or Eddie Cicotte’s imagination, or saliva. For one thing, the pitcher hadn’t done anything illegal. For another, none of the master deceivers of yore could throw a pitch with that much break, and get so much on it.

As Ethier turned to walk back to the dugout, viewers at home could only stare slack-jawed at the radar gun reading. Stephen Strasburg had just thrown a completely unhittable beast of a change-up. At 90 miles an hour. Two minutes later, he made Aaron Miles look like a T-baller hopped up on Nyquil, humiliating him with a 99 mph fastball.

There was no longer any doubt. He Hath Risen.

Strasburg’s final line last night against the Dodgers was as impressive a performance as any pitcher could possibly conjure in his first start back from Tommy John surgery and a year away from the big leagues: five innings, two hits, no walks, no runs, four strikeouts. But the moment felt much bigger than a nice comeback story in an otherwise meaningless game for a crappy baseball team. The Nats drew nearly 30,000 people last night, a huge jump given the evening’s ominous weather forecast, and the team’s season-long habit of drawing crowds in the teen-thousands for most weeknight games this season.

There’s something breathtaking about a monster pitching prospect harnessing his powers. From the moment he throws his first big league pitch, we don’t know what he could become. When Fernando Valenzuela broke in with the Dodgers in ’81, he was a national phenomenon. When Dwight Gooden annihilated hitters as a 19-year-old rookie in ’84, we were breathless, imagining a remorseless pitching machine with the combined powers of Gibson, Ryan, and Koufax. We didn’t even have to wait for Felix Hernandez to crack the majors: The guys at USSMariner.com started calling him King Felix when he was 17 years old.

Just as Dodgers fans had Fernandomania and M’s fans have Felix Day, Nats fans now have Strasmas, a holiday marking every Strasburg start. We like to imagine Strasmas getting celebrated 35 times a year for the next decade in Washington, D.C. Never mind the surgery he’s already had, or the fears inspired by his supposed inverted-W delivery, which may or may not be an actual cause for concern. At least Dodgers fans were sensible enough to merely refer to Valenzuela’s rise in mental illness terms. In Washington, they’re flat-out comparing a skinny guy with a blazing fastball to a skinny guy who died for our sins.

Then again, maybe that’s apt. There are positive signs in Nationals-land, to be sure. Ryan Zimmerman is the young veteran who’s doubled as the franchise player. Wilson Ramos is the 23-year-old catcher they heisted from the Twins who could stick around for a long time. Mike Morse is the hulking slugger who’s come out of nowhere to do … if not an Albert Pujols impression, at least a decent Paul Konerko. Jordan Zimmermann is the electric but largely unknown wingman who could play Cain to Strasburg’s Lincecum for the next half-decade. And then there’s Bryce Harper, the all-world prospect who’s not only younger than Strasmas, but maybe even more hyped … and more talented.

But the Nats still kind of, well, stink. They’re on pace to lose 87 games this year, meaning they’ll be seven years into the Washington era with not a single season above .500. They have still have holes throughout their roster, and they’re pissing away $126 million on Jayson Werth, despite being a franchise that can’t afford to piss away $126 million (read: anyone but the Yankees). And for as much young talent as the Nats have on the major league roster and in the pipeline, they might run into the same problem faced by teams like the Rays, Jays, and Orioles: a stacked division with well-heeled rivals who could make future promising seasons end in disappointment.

If it does take a while for the Nats to become contenders, there’s still reason to get excited. Even the most disillusioned Mariners fans still get up for Felix Day, despite the team’s lingering case of the sucks. Longtime Mets fans suffering from a lost decade, a disastrous ownership situation, and a quarter-century without a title can still reflect back on Doc Gooden’s stratospheric rise and smile wistfully at what he once was before it all fell apart.

And D.C. denizens get Strasmas, a day of revelry when anything is possible — no-hitters, 100 mph fastballs, and change-ups that defy the laws of physics. Rejoice.