The Eagles And Giants Start With Opening Remarks 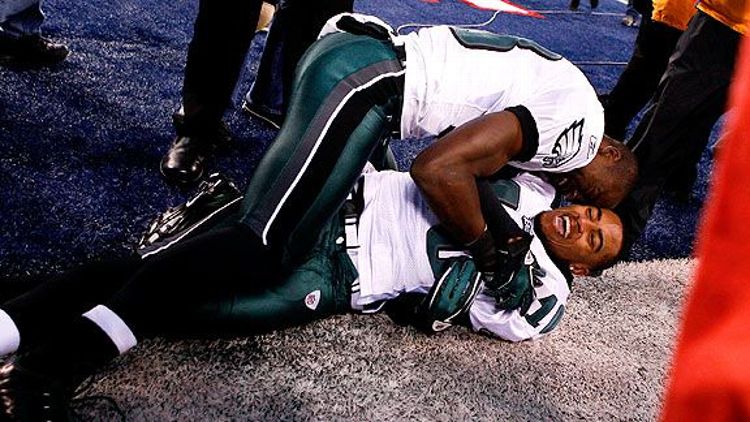 Dunta Robinson’s helmet-to-helmet hit on Eagles wide receiver Jeremy Maclin cost the Atlanta Falcons cornerback $40,000 and probably killed whatever personal appearance prospects he had in the Philadelphia/South Jersey area for the rest of the man’s time on earth. It also might have woken up the Eagles, just in time for their inter-division clash with the New York Giants on Sunday.

I can’t claim to know whether the Eagles had a chemistry problem before their 35-31 loss in Atlanta. But I do know that nothing forges good chemistry like feeling like your team is being targeted or disrespected. Robinson certainly gave the Philly that feeling on Sunday night. And now the New York Giants are piling on, with safety Antrel Rolle leading the charge.

The Reducer: Week 5, Fernando Torres Sings the Blues
Q&A: Dancing With the Stars’ Hope Solo Sizes Up Her Competition

“I don’t want any excuses when we go down there and put it to ’em,” Rolle said, in regards to the news that the Eagles might be without injured starting quarterback Michael Vick. This prompted a response from Jeremy Maclin. “They have no business talking, because they haven’t done anything the last six times … A lot of times people talk, they’re either insecure or scared, so you guys choose … he’s talking so it says something,” he said.

It is interesting, given the way things went between the Eagles and Giants, that Rolle would so preemptively declare the Eagles open to having “it” put to them. It’s even more interesting that he would claim, “I’ve handled DeSean Jackson one-on-one before, and I don’t see why I wouldn’t be able to do it again.” Rolle may have handled DeSean, one-on-one, before. But DeSean handled the Giants, eleven-on-one, like this:

Which led to this:

Which basically means this game can’t get here fast enough.