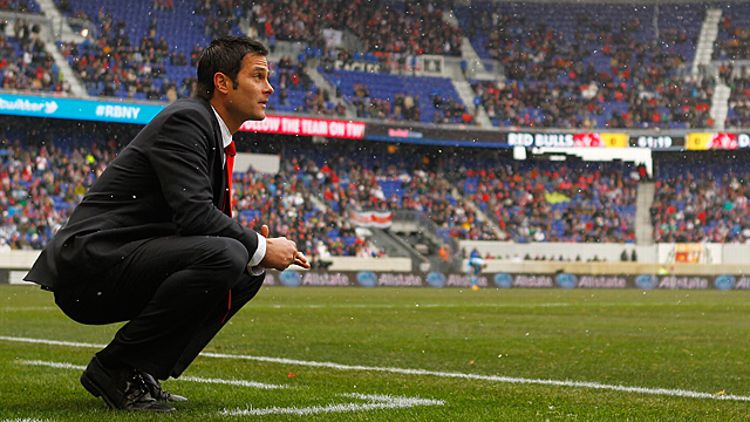 Mike Petke has his feet up on his desk at the New York Red Bulls’ training ground in Hanover, New Jersey. He catches me eyeing the actual-size replica of a Gears of War weapon sitting in the corner of his office and then me looking warily back at his shoes in my face, and he laughs.

“This is not me being big time. My feet are killing me.”

You could forgive him if he did want to indulge in just a little posturing. Petke has had a great first year as coach of New York. Other coaches, such as Caleb Porter in Portland and Oscar Pareja in Colorado, have turned around drifting teams in remarkable fashion this season, and are deservedly in the running for Coach of the Year. But despite the resources Petke has at his disposal in New York, the cultural turnaround he has engineered at a perennially good-on-paper club (and as a first-year coach, no less) has been no less impressive. The Red Bulls might or might not win the Supporters’ Shield, or an MLS Cup, but they’ve begun to shake the reputation as a team that can be bullied out of matches, and much of that appears to be down to the expectations set by their coach.

For his part, Petke considers that cultural transformation as at least as important of a contribution from him as a trophy might be.

“Those words were pretty much spoken by me when I first got the job,” Petke says. “Somebody asked me, ‘What’s going to be a success here? Winning a championship?’ It’s so cliché to say, ‘What’s the goal? To win an MLS Championship.’ Of course it is. Nineteen teams said that this year and I guarantee you that 13 or 14 of them didn’t think they had a chance in hell.

“We’ve never had stability. We’ve never really had an identity. I could name some of the [New York] teams I played on in the early days, that yeah, we showed some character — but there’s never been the real deal. Now, if next year Red Bull goes and chops the team up and disassembles it, then we’d be back to square one. But I think that the consistency is key here. And I think if you get the roots planted firmly, and say ‘This is who we are,’ I think that’s very successful.”

Petke speaks with the vindicated air of a man who has seen regimes come and go at the Red Bulls and the MetroStars before them. I suggested to him that he’s typical of the kind of coach at many clubs around the world, who tends to survive regime changes because he’s seen as a link to the locker room, and perhaps as possessing the institutional memory of a club, but who is rarely given the opportunity to prove himself as a head coach. In fact, coaches like Petke are often disregarded precisely because of the strength of the local connection. There’s an assumption that loyalty is incompatible with ambition, or perhaps that parochialism somehow extends to tactics. This is especially true at a club like the New York Red Bulls, where brand recognition starts with the team name and has, in recent history, permeated every area of senior hiring decisions. The decision to give an internal appointment a chance, let alone one who was emblematic of the club’s pre–Red Bulls history, surprised a lot of observers.

Petke agrees: “I think it took incredible … guts, I guess you could say. Looking at the history of this club, you look at the coaches who’ve been there, it’s all been big names; it’s all been outsiders with big résumés. I think for them to take a chance on somebody who knows the club inside and out, who is blindly loyal to the club, well … Club comes first in my mind, and in my family’s as well. They feel the same way as I do. They’ve grown up with this. My young kids have grown up with the Red Bulls and my wife has been around since I started with the Red Bulls and the New York franchise. This is it for me. This is what I want. I don’t strive to be L.A. Galaxy head coach, I don’t strive to be Man United head coach. I strive to be New York Red Bulls head coach.”

This inevitably brings to mind Petke’s predecessor, the much-traveled Hans Backe, whose tenure was marked by a number of symbolic missteps. The contrast between Backe and Petke could not have been more pronounced than on the penultimate day of Backe’s reign. Tied 1-1 from the first leg of the Eastern Conference semifinal against rival D.C. United, New York returned to a Hurricane Sandy–battered Red Bull Arena in time for blizzard conditions to hover over the stadium. While Backe was captured by the TV cameras sounding downright equivocal about playing the game, Petke was out on the field with members of the crowd trying to shovel snow to get the game played. I told Petke that the moment fixed the image of the side he inherited as one that, when it came down to it, had no character for a fight.

“That’s 100 percent accurate in my mind, and I’ve said it publicly before,” Petke says. “I’m pretty sure that game was lost before the whistle blew, because of what you’ve just said. I remember driving to the game, and I can’t say for a fact who on our side was saying [we wanted to call the game], but I definitely heard the rumblings. I know that D.C. won the mental game before the whistle was blown. They had guys there and a coach that was screaming to play the game.”

Petke shrugs as if to say, “What can you do?”

Was there a moment, I wonder out loud, when Petke looked at the emerging team and thought his project of transforming its character was taking root? I mention the surprising sight of seeing central defender Marcus Holgersson, whose diffident manner had initially seemed out of step with the Petke heart-on-sleeve ethic, actually snarl at an opponent. Had Petke been practicing that in a mirror with him? The coach laughs. (And despite the impression of his rather amped-up postgame pressers, Petke actually laughs a lot.)

“Back before the All-Star Game, there were instances when I’d kind of look and be like ‘Hmmm, is something changing here?’ But I wasn’t 100 percent sure. Post All-Star Game, there were moments when I was sure,” Petke says. “Having said that, there’s not been a moment yet that says that we’ve arrived and we are a complete project. I’m talking about character, identity, professional mentality. I know that every one of these players are going to go home and look in the mirror and be honest with themselves and be accountable.”

Petke takes a turn towards his personal life. “That’s how I’ve lived my life, being accountable, both on the field and off. I make sure my kids are accountable, my wife’s accountable. It’s important to me. I don’t like finger-pointing, because finger-pointing breeds — I think it’s like a cancer. It breeds. You have to be accountable, and I’ve seen a lot of that this year, specifically in the second half of the season. And we’ve been rewarded many times because of that.”

Every time I glance up from my notes during this short discourse on character, Petke’s expression is in one of two modes: Cheshire Cat grin, or a practiced steely glare — of the kind he might have taught Holgersson earlier in the season. He’s utterly affable, though somehow resolutely so. On his first day on the job, he promised not to change who he was, but perhaps keeping that promise is a job in itself, given the task and the transformed relationships he has taken on. There’s a melancholy about loving the club you work for — built into the relationship is the understanding that one day the club will stop loving you back. Not today, though. Mike Petke supports his local team. And they support him back.