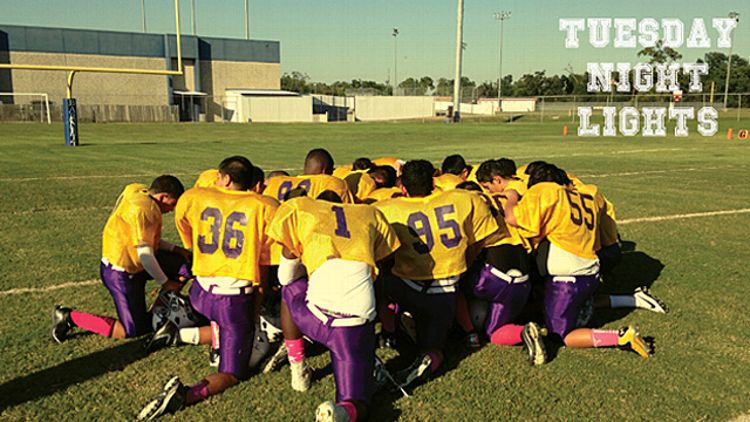 The play that remains from our 2010 championship happened right before halftime of the title game. We were near our own 40-yard line with the ball, sitting on a nine-point lead. It was a pass play, which they were absolutely expecting because their linebackers were crushing our running backs.

We had two receivers on the left and our best receiver, Doughnut, on the right.

The ball was snapped and our quarterback, The Arm, dropped back for one point five seconds, then flicked the ball 20 yards down the field toward the right hashmark. The cornerback, a linebacker spy, and the safety were all in position. They were EXACTLY where the ball was headed. It was to be the easiest of interceptions. Except that it wasn’t. Because The Arm didn’t throw interceptions. The Arm never threw anything except perfection. The ball fell juuuuuust over all 30 of their fingertips, right towards Doughnut’s outside shoulder and softly into his catcher’s mitts. The three defenders crashed into each other, fell to the turf, then sat there confused trying to figure out what had just happened while Doughnut sprinted into the end zone.

The play that remains from our 2011 championship happened at the beginning of the third quarter of the fifth game. Our quarterback, The Everything, shouted “GO!” and then watched as the ball sailed over his head. He turned around, sprinted toward it, scooped it up, and turned back around all in one motion, calculated the positions of all the defenders, and then ran into the fire. He made it past the slow, beefy line with ease.

The play that will remain from this season, which (hopefully) will end two weeks from now with our third football championship in four years, happened last night.

It happened with four minutes to play in the second quarter, our team with the ball and winning 12 points to zero points.

Up until that moment, School M.’s front five, a collection of agile, oversize armoire dressers, had caused no small amount of mayhem in our backfield. For a brief moment, the offensive line managed to thwart their attack. And that was all that our quarterback, The Helicopter, needed.

The Would-Be Star redlined his engines in an attempt to get near the ball. When he realized he was going to be short, he Inspector Gadgeted his right arm out an additional two feet. The ball slapped into his right hand and then died. It was like it was pulled there by a supermagnet. It looked like a magic trick, or like he’d never ever ever bothered to learn any of the laws of motion. Several of our players literally gasped.

Our head coach spun around, looked me in my eyes, raised his eyebrows, shook his head, blew out a big breath, then turned back to the field. Even School M.’s fans applauded what they’d just seen. The Helicopter pumped his fist, the offensive line high-fived each other, and The Would-Be Star tossed the ball to the referee with the same hand he’d caught it with, never even bothering to touch it with the other. As he came jogging by to get set for kickoff, I hollered at him, “Ay! So I guess you gave your left hand the night off then?”

He didn’t even smile.

We played more than two full quarters after that, but the game was already over.

The Would-Be Star: (See above.)

The Helicopter: He ran for more than 150 yards and threw for more than 150 yards, too, which is to a middle school football game what running for 900 yards and throwing for 8,000 yards is to an NFL game. He’s just too good right now. True story: I talked to my mom the day before the game. She asked me a tiny question about the team, which I understood to mean, “Tell me about all of your players for the next 40 minutes.” She asked me, “If you were coaching against [The Helicopter], how would you stop him?” I jumped up, punched her in the mouth, then barked at her, “You hold your tongue!” There are just some things you do not joke about. Having to play against The Helicopter is one of them.

First-Play Ray: First-Play Ray is a track star who decided he wanted to play football this year because he is tall and handsome and popular and so why not just have the whole world at your feet, I guess. This has been his first year playing so there was definitely a learning curve (the running joke on the team is that he was born with a rare condition that caused his hands to be made of solid rubber), but he is a natural athlete so he has started all but one game. Early in the third quarter we called a play that we hoped would isolate him against the small cornerback tasked with covering him. It didn’t work. The safety was all over it. No matter though. First-Play Ray outjumped the two of them, plucking the ball from the sky and then holding it to his chest tighter than anything has ever been held to anything. It was the first touchdown of his entire life. When he came running over to the sideline, he smiled like he didn’t know his mouth could even make that shape. He glowed. It was perfect.

The Bigness: Our seventh-grade team’s season is over. None of the remaining three schools on our schedule have a team for them to play so we’ve absorbed into the eighth-grade team the ones that wanted to continue to play. The Bigness is a defensive lineman. He’s big. And mean. He leaned on his man in the game steadily until he broke him. That happened around the end of the second quarter. The Bigness spent all of the third and fourth quarter in their backfield. In between one series of plays, I walked over to see how he felt about playing against eighth-graders. He said, “They can’t do anything with me, coach.” He was right.

Smelson: We had to play this game without The T, our most ferocious outside linebacker, because of some off-the-field issues. Smelson, who starts as the other outside linebacker, carried all the extra weight. He was magnanimous. He had three tackles behind the line of scrimmage, a forced fumble, and a gorgeous chase-down of School M.’s most devastating player on a stretch play. It was his best game of the season and it couldn’t have come at a more opportune time. Sometimes the universe is real dope.

Third place: “I’m not gonna lie, coach: It felt SOOOO good to catch that ball.” — First-Play Ray, on the bus ride back to the school, replaying his touchdown catch in his head on a loop to anyone who would listen and also to several people who didn’t want to

Second place: “Man, MOVE! I got girls out there I need to talk to.” — The Shark, a seventh-grader, at the ball boy because he was blocking his path to a group of girls waiting for their rides to show up after the game

First place: Our cheerleaders were at the game. So were School M.’s. Since they only open one side of the stands for the game, that means if both teams playing have a cheer squad, then those squads spend the duration of the game 15 feet apart from each other. That’s what happened this time. And they both spent THE ENTIRE TIME shouting and screaming and cheering. They did this in part to motivate their fans but mostly they did it as a passive-aggressive assault toward the other group. A battle between two cheer squads is as vicious as anything that happens on a football field.

The very best this time: After The Big Gun had demolished School M.’s quarterback on a play in the second quarter, our cheerleaders started an “Oooohh, hit ’em, oooohh, hit ’em” chant, mimicking the intonation and dance of Internet-famous Terio’s very popular “Ooohh, kill ’em” meme. I don’t think I’ve ever been more proud of anything.

Next week we play School J. Their team will play hard and will fight and will not back down. But I suspect it won’t be enough. Our boys have gotten better every week. Two games to go for their perfect season. They are megapredators now.