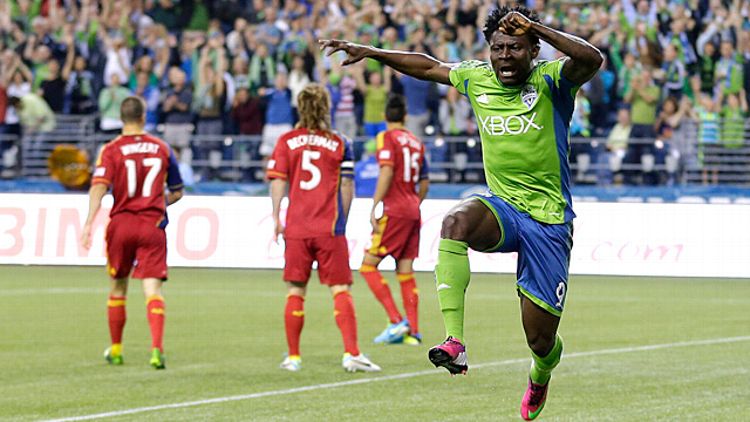 The bare facts first: It’s taken 30 weeks, but as of Friday night, Seattle are top of the MLS Supporters Shield standings. The Sounders beat reigning leaders Real Salt Lake 2-0 in front of 55,000 people and leapfrogged into first place, just as the regular season winds up.

As far as the crowd went, it wasn’t quite the 67,000-plus that saw Clint Dempsey’s home debut against Portland, but I wouldn’t fret too much about falling attendances. Seattle, basically, have a lot of fans. And when more than 50,000 of those fans show up, Seattle win — at least the eight or so times it has happened so far. Whether that means that the money spent on Dempsey might have been better spent employing 10,000 film extras for Sounders home games, just to be on the safe side, I can’t say. But 55,000 people showed up on Friday night and the Sounders were easy victors, going ahead after three minutes and never looking back in the most important game of the year.

Real Salt Lake are a good side, one of the most consistent in the league this year, and displaying enviable traits of systemic continuity through the young players, who this season replaced some of their mainstay performers from the last few campaigns. When you lose players like Will Johnson (to Portland) and Jamison Olave (New York), who in turn go on to be the most reliable players for their new clubs, and then you bring in a mix of youngsters and hitherto fringe players to replace them, without falling off in competitiveness, you are doing something right. Jason Kreis’s team have perhaps not been the model of defensive miserliness they once were, but they’ve been exuberant in a narrow, focused attack that always seems to believe it will outscore the opposition, whether or not principal spearhead Javier Morales happens to get on the scoresheet.

Coming into Friday’s game, they’d scored in 19 straight games, going back to April. They led the Supporters Shield race and they’d also made their way to their first U.S. Open Cup final (until last year, the apparent permanent property of the Sounders). They were in form.

And Seattle beat them handily. The Sounders looked sharper all over the field on Friday night. RSL didn’t exactly freeze in front of the crowd — Plata looked lively — but they were out-hustled by a Seattle side who seem to have discovered their sense of purpose over the last couple of months, following a season when they’d spent a disconcerting amount of time bumping around the cutoff point for the playoffs.

Admittedly Seattle had a significant number of games in hand for much of that time, but games in hand are one thing to have, and actually taking points from them is another. For much of the season, a disjointed-looking Sounders lineup never seemed like it was going to go on a convincing run. The difficult, proactive transfer of Fredy Montero (the playoff-allergic talisman) resulted in a reshuffling that seemed to be adding up to less than the sum of its parts. Consider the following far-from-exhaustive catalog of the Sounders’ early-season travails:

• Erstwhile designated player Shalrie Joseph looked a mile off the pace in midfield.

• Designated player Mauro Rosales lost his touch along with his already suspect speed.

• Getting Eddie Johnson and Obafemi Martins on the field at the same time, let alone having them jel as a strike force, seemed unnaturally difficult.

• The CONCACAF Champions League campaign sparked with a quarterfinal comeback against Tigres, then foundered (again) to Santos in the semis.

• The attempt to regain the Open Cup, after last year’s loss in the final, ended in humiliation at the first hurdle to Tampa Bay Rowdies.

To be fair, there were consistent bright spots: for example, DeAndre Yedlin playing his way into the All-Star Game as a Commissioner’s Pick, and Brad Evans earning a place in the United States men’s national team. Martins and Johnson eventually settled and began scoring, as did the often-overshadowed Lamar Neagle.

But since entering the league, the Seattle fan way is not to be connoisseurs of such consoling phenomena, but to demand trophies. The three successive Open Cups had been vital in this regard — not only for the repeat attempts it earned the team to compete in the Champions League, but for masking the Sounders’ truly underwhelming MLS playoff performances. They at least got to the Western Conference final last year, only to be dismantled by the Galaxy in L.A., leaving themselves too much to do at home. But the small-market RSL team who visited on Friday had actually won an MLS Cup at CenturyLink Field (in 2009’s final) — an achievement the home side had never managed anywhere. A second successive, trophy-less season would hardly be Toronto-level failure, but the Seattle hierarchy are hardly anxious to test the loyalty of their prodigious fan base.

Yet up until a couple of months ago, the Sounders’ season looked like it was drifting toward another underwhelming conclusion, and this time without the likely consolation of Champions League qualification. They still looked good enough for the playoffs, but not consistently possessed of the spark that suggested that once they got there “anything could happen.”

And then Clint Dempsey arrived.

That’s not a positivist claim that Dempsey, the player, turned out to be the missing link for the team (there’s possibly some merit in the argument that even an unfit Dempsey occupies enough defensive attention to liberate teammates decisively, a.k.a. the Tim Cahill syndrome). But as a galvanic figure for the organization, his presence seemed to bring the team into focus and tilt games they’d been drawing or losing too often into the win column.

In the wake of his arrival, Rosales slowly began to rediscover the form that had made him an unthinkably good bargain in 2011. Johnson, too, was making a habit of converting those chances, and generally working himself up into Mexico-beating form, in his own complicated way, as ego and insecurity wrestled for attention in his mind in recent weeks. His recent “pay me” goal celebration possibly reflected the salary disparity of Dempsey earning a $5 million annual contract while he was on a base salary of $150,000. But it also reflected that E.J. had been producing, and that after the strange parallel partnership he’d experienced with Montero (both players scored goals, both played on the same team, neither seemed to score because of anything the other one did), he was, and now knew himself to be, someone the attack was built round.

Dempsey wasn’t even on the field for much of Friday’s game. He and Johnson started on the bench after their midweek international exertions — Martins and Neagle scored the goals. When Dempsey and Johnson came on as subs, midway through the second half, with the game at 2-0, it almost seemed like gloating to have all four main strikers on the field at once. There will be issues down the line for Sigi Schmid in this regard (how do you justify dropping the less-recognized Neagle for one of his more celebrated striking peers, for example, on current form?), though they’re hardly the sort of problems that will keep him awake at night.

It’s going to make for a fascinating run-in for the Sounders. As per the above, let’s not focus unduly on what headlines Dempsey might write in that regard. In the fashion of nearly all DP’s who arrive from Europe midway through an MLS season, there’s enough evidence to suggest that we should expect anything Dempsey does between now and the end of the season on the field to be a bonus. By that reckoning, we won’t see some of his more tangible worth to the Sounders until next season.

But just by dint of filling that third DP slot in a way that makes him the definitive face of the Sounders project going forward, Dempsey may have settled a lot of the existential uncertainty the Sounders had been feeling this season, post-Montero. Their many fans demand success, and perhaps feel that where the mercurial Montero failed to shoulder those demands, Dempsey is made of sterner stuff. Whether true or not, the sight of him being fitted for that mantle has freed up others to play without fear. The Dempsey Sounders look like they expect to win.

This comes with a caveat: A season of underwhelming form doesn’t disappear overnight. The Sounders have looked ponderous during stretches of their last nine games, and the RSL game rather bucked the trend for a run where they have had to force ways to win off set pieces and own goals. But they’ve done so in the belief that goals would come, and they did, and where the Salt Lake game was consistent with most of those last nine games was the result. Eight wins in nine tells its own story. As does the fact that the Sounders are now top of the standings. The Sounders road form could yet undo them for the Shield, but in the playoffs, as I and 60,000 others might now feel more comfortable in saying, anything could happen.

Do Yourself a Favor: Learn How to Stop Talking About Tony Romo