Do Yourself a Favor: Learn How to Stop Talking About Tony Romo 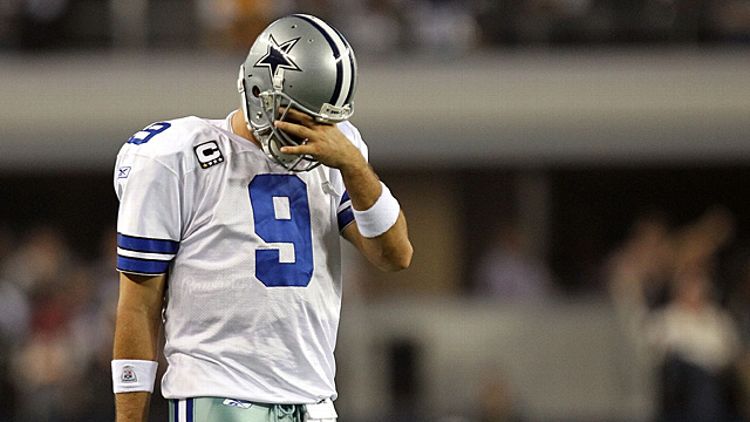 You may have seen that the Dallas Cowboys lost to the Kansas City Chiefs on Sunday. If you were just watching NFL RedZone and checking in sporadically, chances are you noticed that Tony Romo accounted for 88.9 percent of the Cowboys’ yards from scrimmage, but that he also turned the ball over in the fourth quarter. If you’re a self-loathing Cowboys fan who watched the entire game, you may even have gotten into an argument or two after the game about Romo’s merits as a quarterback. What the hell is wrong with you?

It’s safe to say that no NFL quarterback generates more diverse opinions, controversy, or sheer idiocy than Tony Romo (Tim Tebow’s not in the NFL anymore). As the starting quarterback for the Dallas Cowboys, Romo was always bound to be a polarizing figure, even if he wasn’t an undrafted free agent turned three-time Pro Bowler with a beauty queen wife and a penchant for turning the ball over at the Worst. Possible. Time. in the Biggest. Game. Of. The. Year.

But of course, he is all of those things. And this is why it has become legitimately impossible to have a rational conversation about Tony Romo.

Oh, it starts innocently enough. Someone — usually a non-Cowboys fan, but depending on what happened during the most recent Cowboys game, it might actually be a Cowboys fan — says that Romo “sucks.” It’s at this point that a self-loathing Cowboys fan/Romo apologist (this used to be me) feels the need to jump in and point out that by any definition of the word “sucks,” Romo doesn’t.

And that’s where the conversation turns stupid, because no one can be convinced to believe something they don’t already believe about Tony Romo. Trust me, I used to try all the time. All it got me was anger, anxiety, nervous sweats, and sideways looks. That’s why I decided late last season that I would no longer talk about Tony Romo, in real life or on the Internet. If you’d like to do the same, for the sake of your sanity, follow these simple rules.

• Do not talk about Tony Romo, EVER.

• If you find that you absolutely must talk about Tony Romo, only do so by stating facts. For example: “Tony Romo is 13-18 for 186 yards and a touchdown” is good. That’s the kind of thing that can’t be argued with. You play it relatively safe by quoting the box score.

• Never give opinions. “Man, Tony Romo is playing a great game right now” is bad. Adjectives are not your friend.

• If someone else gives an opinion about Tony Romo — for example, “Tony Romo sucks” — DEFINITELY DO NOT RESPOND AT ALL. This is how you end up in the danger zone.

• If for some reason you just couldn’t help yourself and responded with something like “Romo doesn’t suck. By almost any statistical measure, he is probably somewhere between good and really good,” WALK AWAY AS QUICKLY AS POSSIBLE, PREFERABLY BEFORE THE OTHER PERSON RESPONDS TO YOU.

• If for some reason you didn’t walk away before the other person responded with something like “I don’t care what the numbers say. He’s not a winner,” DO NOT RESPOND by quoting his career winning percentage, or by stating that the number is higher than Drew Brees and Eli Manning. This will only lead you further down the rabbit hole.

• It is likely around this time that the person you’re speaking with will try to make a factual assertion that has little to no basis in reality. For example: “Don’t just give me winning percentage. It’s all about clutch plays, and Romo is terrible in the fourth quarter.” Whatever you do, DEFINITELY DO NOT INFORM THIS PERSON that Romo has the highest fourth-quarter passer rating of any quarterback since 2000. If you’ve already done this, it’s too late. There’s no saving you.

• When this person then states, “It’s not just about the fourth quarter, you idiot. He’s never won a big game in his life,” DO NOT SUBTLY REMIND THIS PERSON that Romo led the Cowboys to a win over the undefeated Colts (who eventually won the Super Bowl) in Week 11 of 2006, beat a 10-1 Green Bay Packers team in Week 13 of 2007 (which helped clinch a first-place finish in the NFC), beat a 13-0 Saints team (that eventually won the Super Bowl) in Week 15 of 2009 as part of a 3-0 season-ending finish that helped clinch a playoff spot, or that he knocked off Philadelphia in Week 17 of 2009 to win the division, then took out the Eagles again a week later in the first round of the playoffs. Everyone and their mother knows the only big games Romo has ever played are his three playoff losses and the Week 17 games against the Giants and Redskins the past two seasons, which he also lost. Who cares about games in Week 11, Week 13, and Week 15, anyway? It’s all about the PLAYOFFS, baby, and Tony Romo is 1-3.

• At this point you’re angry, and you’re almost definitely getting some weird looks. You’ve resorted to talking about the same kind of small sample sizes as the person you’re arguing with; you’re just using different samples. The meaning of nuance has long since been forgotten. Soon, you’ll be comparing Romo’s career numbers to his December-and-January-only numbers, looking up the season-by-season DVOA ratings for the Cowboys defense and running game since Romo became the starter and comparing it to other quarterbacks of his stature, playing “which quarterback would you rather” games with your Twitter followers and posting pictures of Romo’s and another QB’s Pro-Football-Reference.com profiles with the names taken out, and all other kinds of craziness. And I have to tell you, it’s just not worth it.