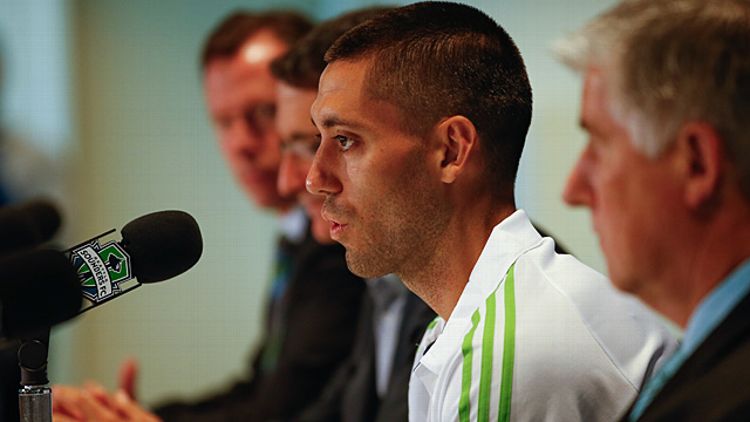 It’s been a busy week or so in MLS, and there’s no doubt what the headline story has been: Clint Dempsey’s signing for Seattle Sounders even had its own Twitter comet trail marking his path across the skies toward Cascadia. Sounders fans scrambled to Sea-Tac following sightings of the player going for a connecting flight in San Francisco, only for the player to be smuggled from the tarmac out of the airport by his prospective club — ensuring that the far more entertaining business of Internet speculation held sway over prosaic confirmation for at least a few more hours of #DempseyWatch.

But while Dempsey’s arrival is undoubtedly a bellwether moment in sporting terms for the league, given the scale of the deal financially and the fact that it represents a move for a player still at his peak (even the most ungenerous assessments of Dempsey tend to only really suggest he has plateaued rather than permanently dipped of late), it also came in a week when other less headline-friendly moves were taking place. Those moves indicated another transitioning within the league, whose long-term effects may be just as far-reaching as the signing of Dempsey, if a lot less dramatic.

First there was the announcement that the ownership group of Anthony Precourt had taken over Columbus Crew, ending the ownership of the Hunt family, which dates back to patriarch Lamar’s ownership of one of the MLS originals. Aside from being one of the founding fathers of MLS, the Hunts will be fondly remembered in Columbus for building the first soccer-specific stadium in the league, the foundation stone for the similarly designated arenas that have been the hallmark of the so-called MLS 2.0 era. There was a certain pleasant symmetry in the Columbus takeover being announced in Kansas City, before an All-Star Game at a stadium, Sporting Park, that will probably be assessed in the future as the apogee of that wave of stadiums.

That wave still continues, of course: Ground has been broken on a stadium for San Jose (though construction is currently delayed); D.C. United finally announced plans to move from RFK Stadium just last week; New York needs somewhere dedicated for NYC to play. And after the scoreboard at the idiosyncratic Crew stadium caught fire earlier in the year, there’s an argument that one of Precourt’s first orders of business might be to look again at how well the stadium is holding up, as 1999’s new-build becomes 2013’s rather tired.

Precourt’s acquisition of the Crew also means that other than Phil Anschutz’s 50 percent share in Houston Dynamo, to go with his AEG holding L.A. Galaxy, the league’s clubs are now each under single ownership (the Hunts will continue to be involved with their now sole interest of FC Dallas). In other words, there are 19 teams and 18 owners. Speaking of that changing dynamic during All-Star week, Commissioner Don Garber pointed out that “that’s been a goal of this league since 2002” and that “it’s been a long time from our days when we had three owners.”

Within a day of making that statement to a handful of reporters at an MLS WORKS charity event, Garber was announcing the league’s plans to add four more teams to the league by 2020 and the Columbus news became somewhat overshadowed (and this even before #DempseyWatch started), but that statement of simple fact about the changing face of MLS ownership is still a striking one to pause on.

In 2002, at the moment that the league contracted and its future looked in doubt, AEG, Lamar Hunt, and Robert Kraft owned all 10 teams between them, with the Hunts’ holdings including Columbus, Dallas Burn, and the limping Kansas City franchise. The Hunts sold the latter in 2006, and since Robb Heineman assumed control and rebranded the side as Sporting Kansas City, the team and its relationship with the city have gone from strength to strength. AEG saw Houston move into a great city-center stadium last year, but with the distraction of Anschutz’s downtown L.A. ambitions for an NFL franchise, and of course the flagship status of the Galaxy, there’s a strong suggestion that now, if not yesterday, might be the right time for AEG to sell the Dynamo if a suitable owner can be found.

So who are such suitable owners? Well, looking at the demographic, several are young and ambitious. The paternalistic support that MLS 1.0 relied upon, where three wealthy owners could be seen as a foundational strength for a fledgling organization run on the principles of competitive parity, was always going to be a hindrance down the line. The sight of two Anschutz teams (L.A. and Houston) contesting the 2012 MLS Cup already felt like something of an anachronism within a league where the media-friendly likes of Precourt, Heineman, Portland’s Merritt Paulson, Montreal’s Joey Saputo, and Seattle’s Adrian Hanauer are becoming more and more the norm (I’m including Hanauer as the most vocal face of the Sounders ownership group). These are owners/CEOs who are devoted to their teams at least as much as the collective project of the league. What draws them? D.C. United is an interesting case study. Owners Erick Thohir and Jason Levien were not lining up to put their money into MLS during what we might call “the evangelism years.” But for an investment group looking to break into a sports market that’s part of a global phenomenon, with a relatively low buy-in and significant room for growth, the current iteration of MLS could be very attractive. Thohir and Levien duly bought out William Chang’s majority share in 2012 and have now pushed the long-running search for a stadium to at least the Photoshop rendering stage and the announcement of a desired site. D.C. may be among the also-rans on the field this year, but off it they’re trying to keep pace with their neighbors.

When I spoke to MLS VP Nelson Rodriguez last season, he talked about raising the bar with the lowest-performing team so that everybody was improving. He was talking about on-field performance, but he just as easily could have been talking about the performance of team owners. New(ish) administrations at Sporting, Columbus, and even to some extent Toronto are raising the standard of league ownership. And it’s contagious: Even Stan Kroenke looks to be stirring into action, going for designated players at Colorado. The controversy of a Vergara at Chivas, or the lack of urgency for a dedicated stadium for New England, becomes all the more pronounced when strides are being taken by other individual owners dedicated to their teams.

To circle back to Dempsey, a lot has been written in the past week about what his signing means for the league, and certainly a $9 million transfer fee and a $24 million wage deal (exceeding Beckham’s record salary) is a significant statement. In the great book of MLS history it’s an obvious chapter heading and it’s fun to think about what other players will now become considered realistic targets given this new threshold of ambition. Seattle’s majority shareholder, Hollywood exec Joe Roth, has reportedly challenged his fellow MLS governors to land Javier “Chicharito” Hernandez (according to Sports Illustrated’s Grant Wahl). And it’s tempting to label Dempsey’s arrival and the paradigm it establishes as the start of MLS 3.0. But significant a moment as it is, it’s just as significant to look at the transformed landscape Dempsey returns to compared to the one he left. Seen from that wide angle, the changing faces of the kingmakers may be just as important a development as the face of the homecoming king.

Adam Rosales Volleyball and the Battle for the American League West