Adam Rosales Volleyball and the Battle for the American League West 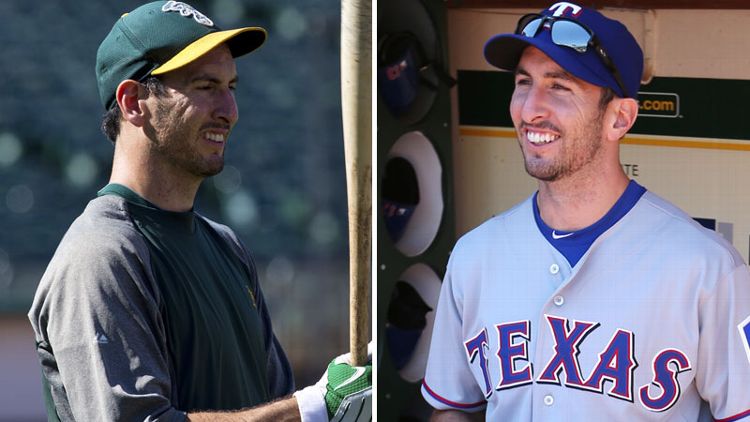 Going into any season, fans hope for two things: (1) that their chosen team wins a lot, and (2) failing that, as many close pennant races as possible. (Thanks a lot, Atlanta Braves.) It’s still way too far out to say for sure that the American League East and National League Central won’t tighten up and turn into exhilarating three-way races, but three of baseball’s six divisions have seen one team break away with the pack falling further behind every week.

The one exception is the American League West, or as I like to call it, Adam Rosales Volleyball.

Rosales is a utility infielder, a career .220 hitter who’s nonetheless played more than 300 games in the majors because he plays competent defensive middle infield. Such players are like homeowners insurance to general managers — usually not worth much, but when an emergency happens (as it tends to do when Jed Lowrie is your starting shortstop), you’re glad to have it.

For entertainment’s sake, we can only hope the A’s and Rangers will treat the division lead similarly in the weeks to come.

Until the last day of the 2012 regular season, the Rangers had the upper hand in this rivalry. At that point, the A’s passed Texas, won the division, and have been out in front pretty much all year.

And I have no idea how they’ve done it. There’s no established star on the team, or even an up-and-coming über-prospect. The biggest name in Oakland’s lineup is Yoenis Cespedes, and while his 99 OPS+ isn’t awful, it’s not what you’d want from a star left fielder. Josh Reddick, last year’s breakout player, has just now pushed his OBP over .300 with a recent home run binge. Oakland’s nominal ace, Bartolo Colon, is a 40-year-old who throws one pitch and is fat not just for a ballplayer, but for a normal person. Its big-name young starter, Jarrod Parker, who started the first playoff game last year, has been kind of mediocre, just like Cespedes.

But Josh Donaldson has turned himself into a latter-day Home Run Baker and the A’s can go about 11 deep with league-average hitters. There is no flash, but neither is there any respite. As to how they got here, Jonah Keri posited in April that a combination of creative front-office moves and platooning had something to do with Oakland’s offensive renaissance. But beyond that, the source of its offensive prowess remains a little mysterious. After all, who expected Donaldson to slug almost .500?

The Rangers, by contrast, have a couple big stars: Adrian Beltre and Yu Darvish, for instance. Derek Holland is quietly enjoying a breakout season, and even no. 3 starter Matt Garza is a sexier name than anyone Oakland has. They’ve lost free-agent stars C.J. Wilson, Josh Hamilton, and Cliff Lee from their first World Series team, but one of the game’s best farm systems has allowed Texas to recover from its losses with ease. The Rangers have the better pitching staff, and while their lineup isn’t as deep, the two starters who contribute least with the bat (Leonys Martin and Elvis Andrus) make up for it with their defense up the middle.

While the genesis of these two rosters is different — Texas built through a couple big-name free agents and lots of highly touted prospects, while Oakland has meticulously constructed a less flashy team — the end result is similar. Oakland ranks 11th in MLB in wRC+, and Texas is 13th. Texas has a team ERA+ of 116, while Oakland lags behind at 106, but they rank almost even in run differential (522-470 for Texas, 523-456 for Oakland). This is partially because they play in opposite run environments. ESPN’s park effects rate Rangers Ballpark in Arlington as a pitcher’s park this year, but it ranked as one of the top hitter’s parks every year before that dating back to 2008. By contrast, O.co Coliseum is a yawning cavern that could not possibly have more foul ground. These are two very well-matched teams (they even have Rosales in common!) with a lot of recent history. This is a pennant race that begs for a climactic last-weekend showdown in Oakland or the Dallas suburbs, one about which some enterprising sportswriter could put together a book in the spirit of David Halberstam’s Summer of ’49.

But while the A’s and Rangers have similar schedules the rest of the season (the Rangers have it easy in August, while after Sept. 1, the A’s don’t play anyone who’s currently less than nine games under .500, apart from the Rangers), the schedule makers obviously had in mind that climactic final weekend between the Rangers and Los Angeles Angels, which … oops.

The AL West’s two primary combatants don’t play each other after Sept. 15, which means two weeks of fevered scoreboard-watching but no head-to-head confrontations. This will probably not be baseball’s only interesting division race, and in the age of MLB.TV and round-the-clock sports highlights, there’s a certain appeal to flipping back and forth between two games.