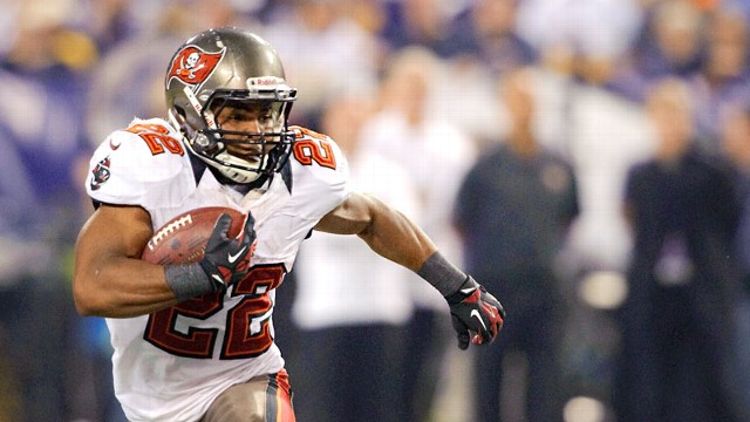 According to MyFantasyLeague.com, this is what the first round of fantasy football drafts looked like in 2003:

The strategy behind this was straightforward: Running backs with the potential for 1,500-plus yards and double-digit touchdowns were the most valuable commodities in fantasy football. Had he been in a league, even Matt Millen would’ve drafted Tomlinson first overall — it was that much of a no-brainer.

As we all know, the following years were not kind to running backs. The explosion of 4,500-plus yard seasons among quarterbacks vaulted the league’s most prolific gunslingers (and, on occasion, their primary targets) into the first round, reducing many otherwise productive running backs to second- and third-round fodder. The idea of drafting the ninth-best running back before the no. 1 quarterback seemed quaint.

This trend may have reached its apex in 2012, when running backs constituted only seven of the first 15 selections. The thought process was essentially the inverse of 2003: Elite quarterbacks (Rodgers, Brady, Brees), not the increasingly replaceable and committee-burdened running backs, won fantasy championships, and if you couldn’t afford to get your hands on one, the next-best thing was to risk a high pick on a potentially elite quarterback (Stafford, Newton). However, a confluence of developments — the Gang of Four’s stunning debut, the ascendance of Matt Ryan, Peyton Manning’s return to form — flooded the fantasy quarterback market, paving the way for the old-fashioned, running back–laden first round we’re experiencing now. Seriously, the position column on ESPN’s live draft results page looks prehistoric.

So grab your starting running backs early and often, preferably in Rounds 1 and 2. Don’t be the dope who waits forever to ask his dream date to prom and inevitably misses out, doomed to a pool of, ahem, less desirable options. You can come out of the first two rounds with Doug Martin and Matt Forte, but it’s gonna take some initiative.

Once you’ve secured Martin and Forte (or something to that effect; any two of the top 14 running backs from those aforementioned live draft results will do), feel free to sit back, relax, and diversify your roster for a few rounds. When the middle rounds hit, and it’s time to stockpile backs, load up on guys with the most upside because risks are meant to be taken with your backup running back slots, especially when you already own two studs.

Just to be clear, here are some running backs who possess absolutely, positively no upside.

Ingram is the James Dolan or InkBoy of football — he keeps inheriting new opportunities to screw things up, despite showing no discernible professional skills. If he leads the Saints in carries again this season, it’s safe to assume he possesses some sort of incriminating video of Sean Payton. There is no other possible explanation.

In other news, Ingram is inching closer (literally — it’s more practical to measure his runs with a ruler than a yardstick) to the ignominious fraternity of Heisman winners who sucked in the NFL. When he finishes yet another season with 3.9 yards per carry, I picture the frat’s charter bros — Matt Leinart, Eric Crouch, and Johnny Manziel (preemptive) — gleefully popping champagne like the ’72 Dolphins, thinking up insane rituals for Ingram to endure. Leinart especially would be really into that.

With C.J. Spiller shouldering most of the load, maybe Jackson won’t end the season on IR for a third consecutive year. Or maybe he will. I don’t really care at this point, because it’s impossible to muster any sort of faith in Jackson’s ability to stay healthy — or, for that matter, his ability to score touchdowns. Moreover, now that he’s a backup, it’s totally acceptable not to care! Moving on.

In the second half of last season, BJGE tried in vain to prove that his fantasy value wasn’t completely touchdown-dependent by eclipsing 100 yards on four occasions. It was an admirable effort, but an obvious mirage: The four defenses he performed like a legitimate fantasy starter against (Kansas City, Oakland, San Diego, Philadelphia) ranked way low in DVOA per Football Outsiders, and the Bengals smartly upgraded their backfield in the draft. Enter rookie Giovani Bernard, a blazing-fast scatback who makes the Law Firm look like William Perry by comparison. I wouldn’t be surprised to see BJGE ceding the starting duties by midseason.

Consider, for a moment, the exceptionally brief Wikipedia page dedicated to Smash and Dash. According to Wikipedia, Smash and Dash may refer to “the former nickname for the duo of Tennessee Titans running backs LenDale White and Chris Johnson,” which is hilarious enough on its own, but wait, it gets even better. Smash and Dash is also “the former nickname for the duo of Carolina Panthers running backs DeAngelo Williams and Jonathan Stewart, now ‘Double Trouble.’” On behalf of Grantland, I’d like to commission an intrepid reporter to investigate the details of the Williams/Stewart nickname change. Surely there is more to the story! They’ve perfected the art of being a shitty running back tandem and deserve to be appreciated accordingly.

This is what their master plan appears to be for 2013:

Of course, the king can’t wear the crown forever, and at some point a new terrible committee will come along and seize the throne from Williams and Stewart. My bet is on Bradshaw and Ballard. Bradshaw is a veteran of the committee circuit and averages about one surgery per week. Outside of a few games last season, Ballard was not viable whatsoever. Throw in the perpetually disappointing Donald Brown for good measure, and you have yourself the makings of a very shitty committee!

First of all, a quarter of their season is against the 49ers and Seahawks. Second of all, none of them inspire much confidence — and that’s putting it lightly. Mendenhall was exceedingly frustrating to own before his injury- and fumble-riddled 2012 campaign, which saw him return from an ACL tear too quickly, suffer an Achilles injury, and ultimately get benched and deactivated. Sure, he’s reunited with former Steelers offensive coordinator Bruce Arians, but Mendenhall will struggle behind a Cardinals offensive line that was horrendous last season and remains in major flux. Additionally, Williams is missing preseason action because of a knee injury, and may not even make Arizona’s 53-man roster, according to the team’s official site.

Unless Richardson, who’s tentatively listed atop the Rams’ depth chart, runs away with the starting job this preseason, St. Louis’s terrible troika of Richardson, Pead, and Stacy will infuriate owners for months to come. I’m personally rooting for Pead to receive the heaviest workload, because at least he allows for a truly great fantasy team name — HUMAN ISAIAHPEAD. With a name like that, fellow owners will have no choice but to bow down to your undeniable superiority. ALL HAIL THE HUMAN ISAIAHPEAD.

On a more positive note, here are some running backs who do have some upside.

I would bet a significant amount of money — $23.75, let’s say — that cornerbacks around the NFL looked forward to a matchup with the Dolphins last year with the same giddiness and fervor of schoolchildren anticipating a snow day. That’s not to disparage Ryan Tannehill, Brian Hartline, or Davone Bess (OK, fine, it sorta is), but they definitely weren’t striking the fear of God into any defensive backs.

Now that he’s joined forces with Matthew Stafford and Megatron, opposing defenses won’t have the luxury of exclusively focusing on Bush, consequently freeing him up on a more frequent basis. The thought of Bush playing on turf is also appealing, and don’t discount the positive vibes the entire Lions organization will be feeling after curing themselves of Titus Young.

While new Falcons running back Steven Jackson is an upgrade over Michael Turner, the injury report has served as his second home throughout his career. Furthermore, Jackson is now the dreaded 30, an age that has historically spelled doom for running backs. It wouldn’t shock anyone if Jackson missed time this season, and if he did, Rodgers would be a more-than-capable replacement, especially in PPR leagues. His game-breaking speed naturally results in big gains, which more than makes up for the relatively pedestrian 3.9 yards per carry he posted in 2012.

Who likes a liar? Patriots running back Stevan Ridley is a big fat one, as evidenced by his Twitter bio, in which he purports to be the “Mario Kart 64 Undisputed Champ.” Such a disheartening and patently false claim (I’m the undisputed champ of Mario Kart 64, Stevan) forces us to consider the karmic justice that often comes to liars in sports and raises serious doubts about his fantasy value.

On the other end of the spectrum is Vereen, who, according to my sources, is a man of impeccable honesty, and according to the Boston Herald has become a favorite target of Tom Brady in the wake of Danny Woodhead’s departure. Vereen has apparently even lined up as a wide receiver in practice, which will likely continue in the regular season considering New England’s depleted receiving corps. BOLD PREDICTION: Vereen finishes the season as a top-20 running back in PPR leagues, and a top-25 back in standard leagues.

As we noted earlier, Bernard is much more talented than Green-Ellis and should be starting by Week 10. Also, nature dictates that anyone with the name “Giovani” must be able to cook a mean pizza, which is reason enough to take a flier on him.

Now that the Twitterverse has confirmed that Lacy is probably not obese, we can all breathe a sigh of relief. He’s just “a power back,” you see. Frankly, Lacy could be 400 pounds for all I care, so long as he continues to trample defenders like he did in college. With an offense as efficient as Green Bay’s, he’ll have plenty of opportunities to score near the goal line, and don’t worry about fellow rookie Johnathan Franklin vulturing carries from him — Lacy is getting the bulk of the work, reports the Milwaukee Journal-Sentinel.

To close it out, here are my top 30 running backs as we enter prime drafting season. These rankings are guaranteed to be more accurate, fact-based, and financially rewarding than my competitors’: