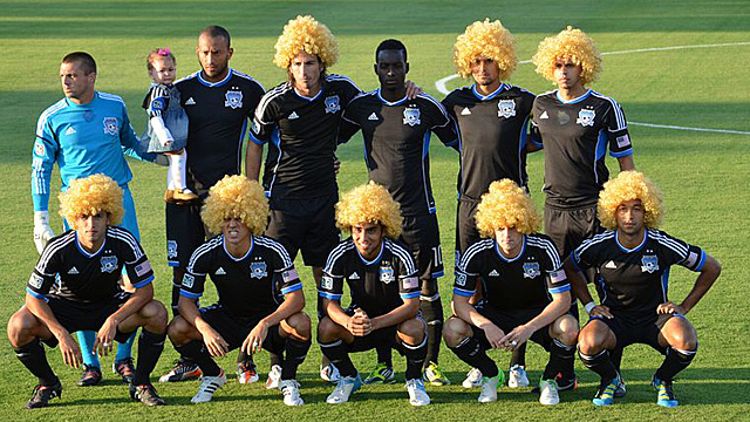 Sorry about that. I dropped my pen.

It’s been a funny few weeks with Hurricanes, snowstorms, Beckhams, and playoffs in my part of the world, not to mention the three days I spent in a darkened room as I processed the concept of Gerard Butler as a Celtic legend, and the week spent on a Manhattan Beach vision quest with Landon Donovan (before he took the decisive penalty in the MLS Cup final it occurred to me that I’d seen that squat before, just before he hurled marshmallows and peyote onto our campfire).

But the bills have to be paid, and with the second draft of my rewrite on the next Lifetime made-for-TV movie due next week (I can’t say too much about it, but the title is L’étranger and the tagline is “Lindsay Lohan IS Hope Solo”), and the confetti just about settled at the Home Depot Center, it’s time to turn our thoughts to looking back on this year’s MLS campaign.

So without further ado, here are the Designated Player 2012 MLS awards:

The big one first — actually, at this point I should mention that my criteria for all these awards has little to do with results and more with how much they entertained me throughout the year.

Unfortunately, Philadelphia’s Peter Nowak, an early front-runner, was ushered out of PPL Park before he could actually go the whole hog on what was turning into a very promising Sopranos routine, as his “my way or the highway” turned into a six-lane autobahn. He took with him the subplot of a five o’clock shadow that, had it been left unchecked, promised to Eddie Gaven its way to biblical proportions, and the further prospect of a bare-knuckle boxing match with Freddy Adu, which may have ended in the Delaware River. His replacement, John Hackworth, was too damned nice to entertain — as was Frank Yallop at San Jose, who’d otherwise have been an obvious front-runner. Frank Klopas looked promising for a while, in that sense of him looking like he’d stumbled to the sidelines by accident, and I overheard some fantastic expletive-ridden rants from his direction, but they rarely had much to do with the game we were watching, and were more a sort of general bawling at the sky as his raincoat flapped in the Illinois winds. It’s apparently why Flaco Fernandez used to take the long way off the field every time he was subbed out (as well as the long way ’round the box during approach play).

Of other contenders, it was always enjoyable listening to the officials’ audio feed on my closed-frequency monitor, as the nearside assistant referee giggled at dodgy throw-in decisions he was about to give just in front of Peter Vermes. The Sporting Kansas City coach could always be relied upon to rise apoplectically to his feet at such moments, as well as when he was tormented by other injustices such as the hue of the grass, American Idol voting, people who text in movie theaters, and just about any moment, in any game, ever (see also Kreis, Jason). And having attended a couple of Robin Fraser’s press conferences (which could essentially be boiled down to steely glares and “It’s not funny … ”), I hope he gets back into the game soon. We need gravitas like that when faced with impertinent questions from blogs with names like “Chivas Deference” and “Goatee Beers.” Martin Rennie continually looking like he’d forgotten his homework on the sideline was always an entertaining expression, but like Sigi Schmid’s unfeasibly tight scarf, it was a one-trick pony.

Basically it came down to three front-runners for me. Ben Olsen managed to combine anger and childlike wonder as he watched each injustice unfold against his D.C. United side, and the following monologue before the snow-postponed game-that-wasn’t against New York almost saw him take top prize:

Reports that Hans Backe muttered that the same snowstorm was “like Sweden, in a way, which I left, by the way,” could not be confirmed. Backe may have left New York, but he will forever be in my heart with his comedic substitutions — a tactic he employed about as often and with as much integration into his workflow as a 1980s CEO might idly set a desktop executive toy in motion.

But for me there can be only one winner: Bruce Arena. So many moments make it worth it, and honestly, winning a back-to-back MLS Cup after giving the entire league half a year’s head start, and losing to Chivas and New England along the way, figures pretty low on the list. In just the past week, he has told us that he and Robbie Keane grew up together gazing at sneakers in the Fulton Mall, and that the latter is one tough bastard, before segueing into a full Lordz of Brooklyn medley, with Keane himself on silent beat box — setting the tempo by switching at random between his two looks of twinkly cheer and furrowed confusion. Encouraged by Arena’s bonhomie, several reporters joined in nervous laughter at the post-Cup-final press conference, at which point Arena fell silent for the next 25 minutes. He then stared imperiously down in slow scans of the room, licking his lips occasionally, and only rose when the ink on the proposed postseason tour schedule in front of him actually slinked off the page in embarrassment. Nodding grimly, Arena smiled again, closed his eyes, and whispered “next person I see is a dead man” before opening his eyes to an empty Home Depot Center TV room full of scattered chairs. He left the scene in a golf buggy and a Hawaiian shirt and carrying the Designated Player Coach of the Year Award, which he promised to “treasure forever.” It was later found in a hedge in Parking Lot 13.

Team of the Year

Again, it’s very tempting to give this to the Galaxy, what with them winning it all and all that. And yes, again, honorable mention to the New York Red Bulls — who may wish to consider a switch to a sponsorship from Orville Redenbacher, so suited are their daytime-soap-opera antics to the concurrent consumption of popcorn. Sporting KC and Houston Dynamo were too much like proper teams to ever seriously catch my eye. Portland Timbers almost made it for their comedy stylings against Cal FC in the U.S. Open Cup, but by the end of the year that was forgotten as they carried off the Cascadia Cup in a manner that we’ll file under “least worst on the day.” Toronto, too, were … well, more of them in a minute.

But the winner, by some distance, was the swarming attack of the San Jose Earthquakes, seen here in one of their dramatic stoppage-time comebacks:

At least part of the joy the Quakes brought me this year was the sense of anticipation for their Champions League adventures as cultural ambassadors for MLS next season. CONCACAF referees, meet Lenny … actually, New York, pass the popcorn.

Again, on purely footballing terms, Chris Wondolowski’s wonderful goal-scoring record — or the Robbie Keane that returned from the Euros and drove the Galaxy through to the Cup — would probably be fighting it out, but the former’s humility and willingness to study the game discounted him early. Keane further edged it with his continued impression, during interviews, of a motorbike dispatch rider who’s turned up at the TV studios and been mistaken for the guest, and who, somewhere in makeup, decides it’s easier not to explain and just give it a bash answering questions about the fiscal cliff.

Thierry Henry’s continued aggressive assimilation into American life meant that he asked to be withdrawn from the running, as he’s now “strictly old-school lacrosse, d’accord?’ Otherwise he’d have been a contender.

Fans of the Year

I know this award is usually Scotch Taped inside the Cascadia Cup, for the contestants to argue over, and honorable mention has to go to the New England, Chivas, and Toronto fans for experiencing character-building above and beyond the call of duty (your Sunderland season tickets are in the mail). But the award goes to the D.C. fans who traveled for four hours each way on buses only to be sent home in the snow and then having to do it all again the next day up in New York. In 20 years there will be approximately as many people claiming to have been on both journeys as now claim to have been to see the Sex Pistols at the Lesser Free Trade Hall — so I encourage all those who actually were there to collect and safely encrypt all verifying data now. Such trips are what legends are made of. At least I expect they are. I thought it looked a bit cold around 4 p.m. and watched it on TV.

Game of the Year

Villain of the Year

I am fascinated by Rafael Marquez. Like with spam e-mails, it’s hard to escape the feeling that he’s actually a prank being played by a comparative literature department somewhere. He starts games with the neat economy of style of a Raymond Carver sentence, and ends them in the sleepwalking violence of a Bret Easton Ellis character. His apparent insistence that these are reconcilable internal modes, and even tenses, also has the hallmarks of magical realism, while his playing with an apparent lack of memory, or sense of cumulative transferable knowledge, is straight out of a David Markson novel …

I received the ball. I moved it fast, without fuss. It was a cold night. The air stung, hard. I received the ball. I looked up. A beat. I chose the man and passed. I received the ball. A sideways turn and another pass. I stepped forward. I retained possession, with a block and a glance. A man to my side. I punch him in the face then Iunge, Phil Collins loud in my ears as I shove my business card in the nape of his shirt and press. I lash out in desperation — “There is an idea of a Rafael Marquez, some kind of abstraction, but there is no real me. Only an entity, something illusory.” then walk from the field. Everyone stares. This is not an exit.

[Pause for three weeks.] I received the ball. I moved it fast, without fuss. It was a cold night …

One final note: The most bizarre part of a Marquez sending-off is the way he trots off the field instantly and meekly after each one. It’s like the red card is his safe word.

Special bonus on any Rafa infraction when it’s NBC’s Arlo White calling the incident — Arlo, the last man in the world to speak the Queen’s English, is at his best wondering what the world is coming to …

Video of the Year

Two leading candidates for me. The first is from that epic D.C. vs. New York playoff series, and it’s the heroic grandstanding of D.C. United goalkeeper Bill Hamid. Bear in mind he’s dropped the ball in the net during the first leg to concede an equalizer, just been sent off in the second, and his side will concede three in the next game with him out. Bill strips to the waist, strides into the area in front of the glass-walled lobby of Red Bull Arena (watched open-mouthed by 8-year-old autograph hunters), and tells the world and a lone stringer for Soccer by Ives, “They can’t hold us back.” It’s that type of perspective that may make him my new favorite player.

On that note, the following are castings we need to see in future clips: