The Death of the Superstar Manager 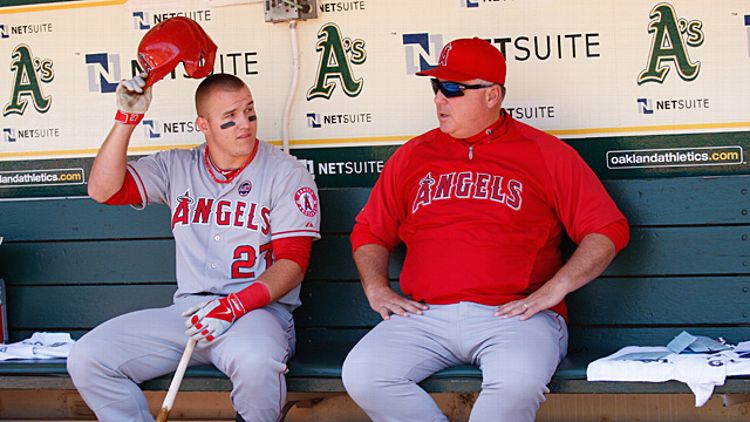 Angels manager Mike Scioscia denies that he’s experiencing tensions with his boss, general manager Jerry Dipoto, over “philosophical differences.” One presumes that these differences are about the kind of players Dipoto has acquired, or the manner in which Scioscia has deployed them. I’d like to imagine these two having actual philosophical differences, Dipoto spitting out quotations from John Rawls’s A Theory of Justice at his field manager, and Scioscia angrily returning fire with choice excerpts from Robert Nozick’s Anarchy, State, and Utopia. We should be so lucky.

What is interesting about this rift (which, even if it doesn’t actually exist, is a credible enough possibility to warrant Scioscia’s denial) is that it brings into relief how little control and prestige belongs to baseball’s field managers anymore.

In all sports, head coaches have two primary functions: as tacticians and as managers. The tactical aspect of the job involves setting lineups and making substitutions, as well as determining a general style of play. The managerial aspect of a coach’s job involves keeping his charges happy, encouraging personal and group development, and fostering an air of cooperation. No sport’s head coaching duties skew as overwhelmingly toward the managerial scale as baseball. Among the five biggest team sports in North America — baseball, football, basketball, hockey, and soccer — only soccer involves less in-game direction from the bench than baseball, and no sport’s rules and customs impose more tactical and positional rigidity. An average football fan can probably tell a Chip Kelly playbook from a Gary Kubiak playbook. Not so in baseball.

The idea of the field manager as a middle manager, and not as the defining strategic driver of a baseball team, is like just about everything else about the game: It dates back to Branch Rickey and a simplified version was popularized recently in Moneyball. Because the gameplay of baseball is so dominated by the idiosyncrasies of its players, roster composition determines strategy and not the other way around.

The baseball establishment is becoming particularly aware of this. Over the past three years, several of the game’s most celebrated managers have left the dugout. Joe Torre, Tony La Russa, and Bobby Cox have all retired, with Davey Johnson to follow at season’s end. Charlie Manuel and Ozzie Guillen have been fired. Of managers who came up expecting to direct, and not merely to lead, Scioscia is one of only a handful that remain, and among those, at least he and Minnesota’s Ron Gardenhire look like they’re getting close to the end of the road.

Which is not to say that managers don’t make a difference, or that they’re removed from the decision-making process. Houston’s Bo Porter was hired specifically to supervise perhaps the most aggressive and dramatic rebuilding project in the history of baseball. Arizona’s scrap-and-grit experiment has Kirk Gibson to lead it. Likewise, the Tampa Bay Rays, whose aversion to orthodoxy in search of small advantages has been well-celebrated by Grantland’s baseball writers, chose Scioscia’s longtime lieutenant, Joe Maddon, as manager.

If Scioscia is one of the last of the old breed of manager, one who intends to build his team in his own image, Maddon is the exemplar of the new breed: a strong public figure who works actively and in concert with the front office to promulgate a coherent institutional philosophy among the players and staff. With the acknowledgement that a team’s direction comes not from the dugout, but from the front office, the partnership between Maddon and Rays GM Andrew Friedman should be held up as the ideal.

But it’s rare to find a manager with the charisma and activity of Maddon who will still follow orders. That GMs are increasingly coming not from the ranks of former players doesn’t help things. Of the 30 current GMs, only three have major league experience: Dipoto, Billy Beane, and Ruben Amaro. While most of the rest are former minor league players or scouts, the new breed of GMs tend to be extremely pragmatic and creative, and are often younger than the managers who work for them.

Failing to find a Maddon or a Porter, GMs are compensating in one of two ways. One is by making the best of the manager they have. The Texas Rangers are run by Jon Daniels, one of the youngest and most aggressive GMs in the game. In 2006, Daniels hired Ron Washington, who is, in addition to being nearly twice Daniels’s age, one of the most popular men in baseball. Washington manages like it’s still 1985, which has both its advantages and disadvantages. One of the disadvantages is his bullpen management. In 2011, coming off a World Series appearance and in possession of one of the game’s best rosters, Daniels acquired two of the game’s best relievers, Mike Adams and Koji Uehara, to bolster what was already a solid bullpen. That’s how Chris Davis came to be in Baltimore, by the way. But Daniels found himself needing to compensate for Washington’s managerial style, building a bullpen so formidable that it was impossible to screw up.

The other way is to hire a manager without the gravitas of Washington. In the past two seasons, the Cardinals (Mike Matheny), Marlins (Mike Redmond), White Sox (Robin Ventura), and Rockies (Walt Weiss) all hired young, inexperienced first-time managers.

Matheny and Weiss had both worked as instructors following their retirements, but the four of them brought next to nothing to the table in terms of experience. Considering that the White Sox and Rockies both considered hiring active players — Paul Konerko and Jason Giambi, respectively — to manage their teams, this isn’t a coincidence.

Just think about who that quartet of young managers replaced. In Colorado, Jim Tracy was hardly a rabble-rouser, complying gamely with the Rockies’ four-man rotation experiment last season even as it resulted in losses that put his job in peril. But both Ventura and Redmond replaced Guillen, a man who (in terms of high-maintenance coaches) makes Jose Mourinho look downright compliant.

Matheny took over for the dean of the rock star managers, Tony La Russa, a guy who was intent on managing as much as possible. La Russa was immensely successful, and extremely innovative, in a Dr. Moreau kind of way. It’s possible, even likely, that Cardinals GM John Mozeliak wanted someone without the experience or cult of personality to make waves.

All this sounds kind of sinister, the idea of Harvard hotshot front-office types, with no respect for tradition, emboldened by staggering empirical data and the allure of Brad Pitt movies, neutering one of baseball’s proud traditions. But it isn’t that. It’s a realization that how a roster is compiled often matters more than how the manager uses it. The manager still gets to drive, but Scioscia is part of the last generation that expects to have a say in buying the car.

The Brady Andersons of the NHL