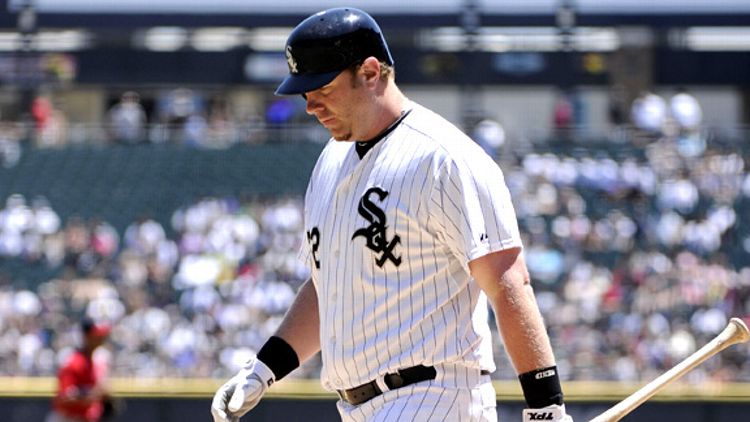 Steroids. Whenever a baseball player suddenly falls off a cliff, it’s because he stopped taking them. Enter Adam Dunn: 6-foot-6, 285 pounds, power-hitting metronome for the first 10 years of his career. Then complete collapse — one so bad that we’re now on the brink of history.

How bad has Dunn been? The lowest average in history by a player who qualified for a batting title belongs to Rob Deer, who hit .179 in 1991. If Dunn sees 200 more at-bats this season he’ll need a .210 batting average — 52 points higher than he’s hit this season — to avoid setting the mark. But, as everyone knows, batting average is inherently volatile, dependent on the whims of bad hops, defense, and luck. Dig further, it only gets worse. Through 82 games, Dunn has posted a staggering .158/.288/.299 line — look at that slugging percentage! — with nine homers, 124 strikeouts, one submarined major league franchise (co-credit: Alex Rios), and 57,000 fantasy teams burned to the ground.

If ever a player juiced — or fell under some kind of horrible Wicca curse — this is the guy, right?

It’s not so simple — or shocking. Dig deeper and you’ll find signs that the White Sox should have known Dunn was a terrible signing before he started whiffing on everything in the greater Chicago metro area. Sure, he hit 38 homers for the Nationals last year, but his game was already eroding: He walked just 77 times against a staggering 199 strikeouts, a career-high even for the 11th whiffiest player of all time. (Unrelated: I love that Bo Jackson has the fifth-highest strikeout rate in baseball history. Even his failures were spectacular.) Players lose their bat speed and reflexes as they get older, granted, but Dunn is only 31 — and in 2010 displayed the worst batting eye he’d ever shown over a full season, swinging and missing on one in every seven strikes against him and an astronomical number of pitches outside the zone.

So the decline that subtly started last season has accelerated, to say the least. His biggest problem is that he ain’t hitting ’em where they ain’t. Line drives fall in for hits far more often than any other type of batted ball, followed by grounders, and finally fly balls. Dunn leads all of baseball in fly ball rate. This is not necessarily a bad thing. If you’re a power hitter, you want to hit the ball in the air. But Dunn is clearing the fence on just over one out of every 10 fly balls hit. That’s less than half his career rate. His batting average on balls hit in play is just .235, about 60 points below both his career average and MLB-wide averages. Which is to say, Adam Dunn’s either been way, way, way unluckier this year than ever before, or he’s making weaker contact than ever before. Probably both.

One possible explanation, beyond age, bad luck, or the aforementioned Wicca curse, is his new role. A career National Leaguer, Dunn is a designated hitter for the first time this year. Hitters tend to struggle when they start DHing. There are a couple of possible reasons for this drop. Players often become DHs as they get older and their skills start to slip. It might also be linked to what’s called the “pinch-hitter penalty.” Pinch-hitters see a 10 percent dip in effectiveness, which makes sense given how hard it is to come off the bench cold. DHs might then suffer from the same inability to stay warm and focused, given they don’t play the field.

For his part, Dunn has expressed his reluctance to DH in the past: He passed on a contract offer from the Rays two years ago, partly because he didn’t want to fill that role. The player the Rays did sign that offseason, perennial 30-homer man Pat Burrell, suddenly turned into Rey Ordonez, losing all ability to hit as soon as he became a DH for the first time. When the Rays dumped him and the Giants picked him up, he suddenly became a one-man wrecking crew who helped propel San Francisco to a division title.

(The Burrell bomb stands out as the worst mistake Rays management made during the team’s run of two AL East titles in three years. Burrell’s $9 million salary handcuffed the cash-strapped Rays so badly that it might have hindered their chances to get Cliff Lee at the 2010 trade deadline, a pitcher who went on to single-handedly thwart their shot at a World Series.)

Of course, a switch back to the NL might not fix the problem either. Dunn may just be — to use a highly technical term — cooked. For a six-year stretch, Dale Murphy was one of the very best players in the world, a monster hitter who bagged two MVP awards. Then, in the year he turned 32, he lost it, hitting just .226 and setting off a painful, six-year decline phase that ended with him flailing away in Colorado Rockies expansion purple. It was one of the saddest, most dramatic collapses a player had ever seen.

Adam Dunn turns 32 in November. If he keeps going at this rate, Dale Murphy’s plight will look like a weekend in Cabo by comparison.

Jonah Keri’s new book, The Extra 2%: How Wall Street Strategies Took a Major League Baseball Team from Worst to First, is a national best-seller. Check out the Jonah Keri Podcast at JonahKeri.com and follow him on Twitter.

The Weekend That Was: Seattle's Woes, the NFL Lockout and Chipwiches