The Complicated Legacy of Jimmy Rollins 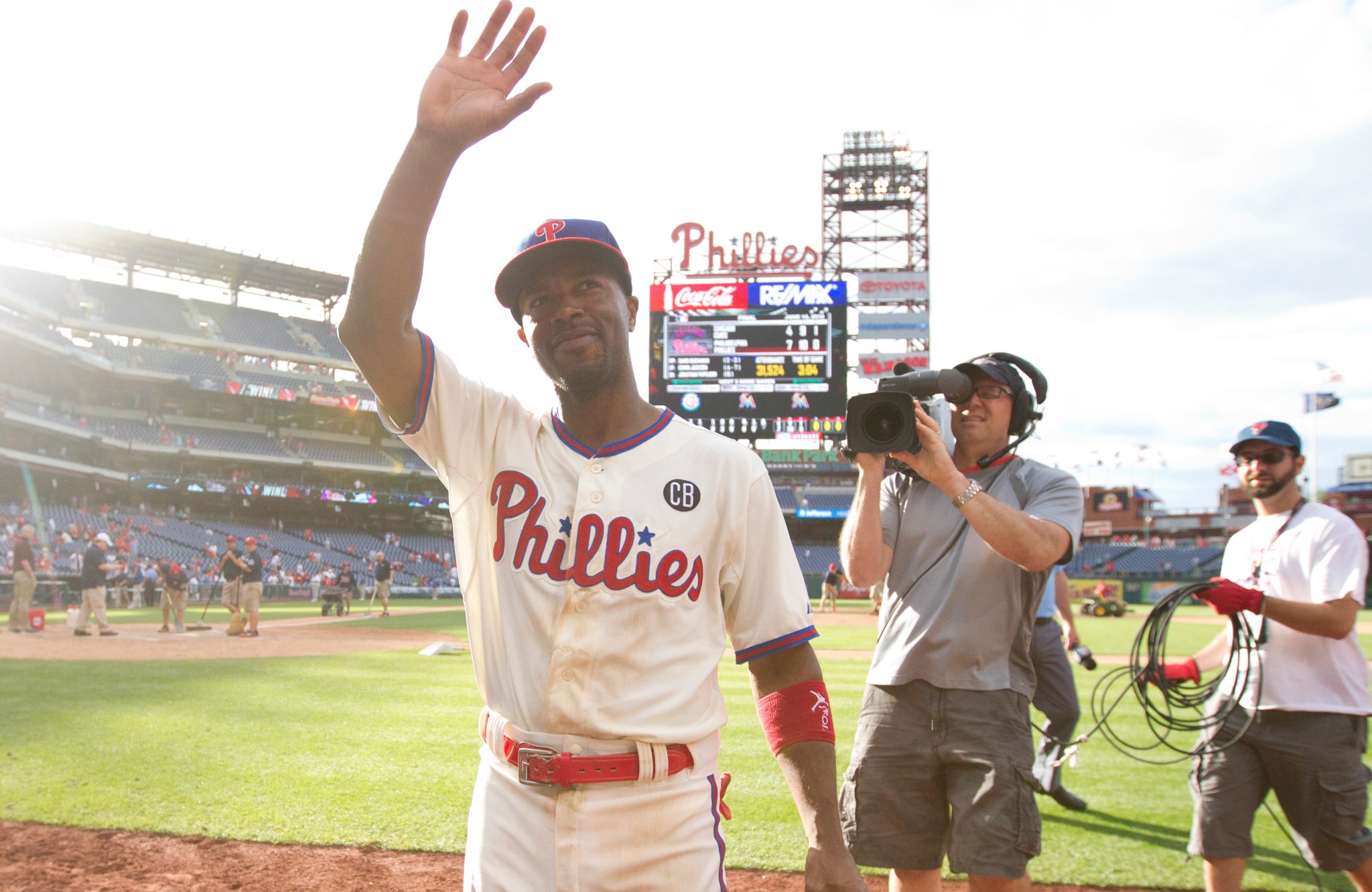 On Saturday afternoon, Jimmy Rollins collected the 2,235th hit of his career, the most ever by a Phillies player. After Rollins singled to right to set the record, the man he passed, Mike Schmidt, ambled out of the dugout, congratulated him, and held his hand in the air like a victorious wrestler. It should’ve been a passing-of-the-torch moment, one legendary Phillies lifer acknowledging another legendary Phillies lifer, two of the greatest players in franchise history standing together for a moment to celebrate one breaking the other’s record.

But nothing’s that simple with Rollins.

Full disclosure: I’m a Phillies fan and Rollins is my favorite Phillies player ever, so my feelings about him are less complicated than most.

Over 15 seasons with the Phillies, Rollins has done everything right on the field: at least 154 games played in each of his first seven full seasons, three All-Star appearances, and an MVP award. Rollins was the vocal leader of the only championship team Philadelphia has seen since 1983 and the sole constant in the best 10-year run in franchise history.

Off the field, Rollins has been a model citizen: charming, talkative, candid with the media, and fiercely loyal to both his teammates and his adopted hometown. His record speaks for itself, and even if it didn’t, the media would speak for him.

But in spite of all he’s accomplished and how much he’s wanted to play out the string with the organization that drafted him 18 years ago, there’s a significant portion of the fan base that very loudly and very persistently insists on Donovan McNabbing the shit out of him.

These are people who, once every few years, notice that Rollins didn’t run out a ground ball, and say that failing to hustle two or three times over the course of a career outweighs his 43 wins’ worth of production. When Rollins said he wanted to stay with the Phillies and set the franchise hits record, they decried him for being selfish. (Left unexplained, of course, was how Rollins was hurting his team by getting hits, particularly when, at 35, he’s playing some of the best baseball of his career. It’s like they’ve never seen Reid Brignac hit.)

And it’s not just the usual suspects, the Wing Bowl crowd — in supporting Rollins, Schmidt stands at odds with a couple of his former teammates: Pete Rose, in a moment of hypocrisy that stands out against a lifetime of hypocrisy, criticized Rollins for sticking around to pad his hit total. Meanwhile, Larry Bowa, who wasn’t half the shortstop Rollins is, has been one of the most vocal bench coaches in recent memory, following Rollins around and hectoring him like the ghost of Jacob Marley. It’s an unceasing refrain that makes me personally embarrassed to be a Phillies fan.

So you can’t blame Rollins for saying, after he set the record, that he’d consider waiving his 10-and-5 rights to accept a trade if the Phillies were going to undertake a full-scale rebuild. I can’t be mad, even if I’m entirely unprepared, emotionally, to see him in another team’s uniform. Since the Phillies are going to be really bad for the next few years no matter what happens, I’d rather see them be really bad with Rollins in the lineup and have him retire as a one-club man.

But that’s not my decision. If Rollins wants to chase one more title or one more paycheck somewhere else, that’s his right. He deserves the right to end his career on his own terms, away, if necessary, from fans who didn’t deserve him.

Men in Blazers: Mourning England and Celebrating the USA From Rio