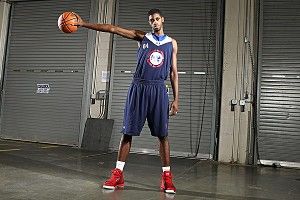 College basketball stops being relevant to most people the day the champion is crowned in early April. For the diehards, it lasts a few weeks longer as players decide whether to stay in school or declare for the draft, the coaching carousel spins wildly, and the last high school recruits choose their college destinations.

National Letter of Intent (NLI) Day is May 16, but only three undecided über-elites

The Best of Who’s Left

Bennett is the top-ranked power forward in his class, a five-star recruit, and the seventh-best prospect on the ESPN 100. Everyone knew his selection process would be slow from the beginning, and MaxPreps speculates that he may wait until after the May 16 NLI deadline. In that case, he’d have to sign a financial aid agreement rather than a letter of intent, which is less binding. His top four schools are Florida, Kentucky, Oregon, and UNLV. Bennett is originally from Ontario, but played most recently at Findlay College Prep, a basketball academy in Nevada.

Jefferson, ESPN’s fourth-ranked power forward and no. 25 overall, is the king of the rumor mill. Every day, there seems to be an announcement that he’s on the verge of deciding, and every day passes without a decision. Some have speculated that he’s waiting to see where Bennett goes. Jefferson is interested in Kentucky, but may want to avoid the Wildcats if Bennett is his competition. He’s also considering Duke, N.C. State, and Villanova — and the Wolfpack are enough of a consideration that the waiting game has been particularly torturous to the Raleigh partisans.

A small forward, Pollard was Mississippi’s Mr. Basketball, and he’ll land at either Alabama, Missouri, Texas, or Georgetown. ESPN ranks him 28th among all players, and seventh at his position. The Columbia Tribune in Missouri reported that he “should” make his announcement today.

The two big stories, of course, are Larry Brown taking over at SMU and Seth Greenberg getting the ax at Virginia Tech.

Whether or not you agree with Tech’s decision, Jim Young at ACCSports has a thorough recap of exactly how poorly the Greenberg firing was handled by the Hokies, and it’s well worth a read.

As for Brown, speculation is rampant about how long he’ll actually stay at the school, why he’s there in the first place, and why, for God’s sake, fired head coach Matt Doherty actually attended his press conference. Also, it looks like Brown is already clearing house, having booted several of Doherty’s players off the team in the first week.

I don’t even know what to say about this story, which contains elements of twitter, sex offenders, and motivational quotes, except I’m glad I don’t have to cover recruiting at Ohio State this week. Also, it proves something I’ve been saying for a while: It’s creepy when grown adults tweet at teenagers. It just is.