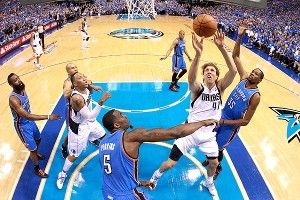 
Today, Anthony is training his eye on the Dallas-Thunder series. The Thunder have a decided advantage in the series, leading 3-0. But anything is possible in Game 4. Watch Anthony’s playthrough above, marvel at what he seems to think is “traditional folk dancing in the American South” and imagine what life would be like if he were right.

As with last week, part of the fun is predicting the score. After predicting the Hawks-Celtics Game 1 score correctly, Graham B. of Indiana won an MS Paint drawing of Marty Conlon. This week’s prize, again an Anthony Richardson original, is an MS Paint rendering of Earl Boykins on a stepladder. Stirring stuff.

Leave your predictions in the comments. And if you know what’s good for you, follow Anthony Richardson and CPU vs. CPU on Twitter. You can check out his previous NBA Playoffs Playthrough here, and all soccer playthroughs here. (You should do that.)