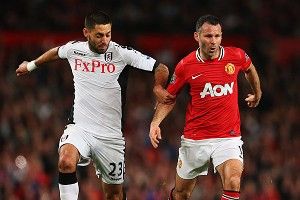 Are you ready for the future? Last week, BusinessWeek reported that when NBA owners meet on April 12 for the first time since the lockout, they might get into a conversation about the feasibility of putting corporate logos on jerseys, a la European soccer. Well, it’s about time. The first step is to get everyone to agree that giving up ad space on jerseys is an excellent idea. The second step is to lie back, awash in corporate largesse. BW has the pertinent details:

Front Row Marketing Services … figures the annual cost to companies to place their logos on uniforms would range from $1.2 million to $7.5  million per year … President Chris Lencheski [says,] “There is a marked difference on the return, depending on where a patch might be,” he says. “And is it a 3-inch-by-3-inch patch? Or is it a 3-inch-by-3-inch square, and your logo can fit inside that area?” A study by Horizon Media last year put the annual value of the television exposure of the space across an NBA jersey’s chest in a range from $4.1 million for the L.A. Lakers to $300,000 for the Minnesota Timberwolves. [IMG’s David] Abruytin … says those numbers are probably low. He estimates the Lakers could fetch $10 million to $15 million per year. Abruytin … point[s] to European soccer, where marquee clubs, such as Manchester United, get more than $30 million a year for uniform deals.

Also of note: “The players, for their part, are not likely to complain, because they would be entitled to a share of the extra revenue.” But the owners might ruin everything: “The league’s … have-nots are likely to cry foul over any plan that promises to be dramatically more lucrative for the top five franchises than it is for the rest.”

Let’s momentarily put aside consideration of whether this will happen anytime soon and look at the larger picture. Every single other thing that could possibly be sponsored in the NBA is already sponsored, right? So, really, it’s only a matter of time before they get to jerseys. It seems pointless to fight it. But is there even anything worth fighting back against? BusinessWeek was nice enough to put together a slideshow of possible jersey sponsorships for a few NBA teams, and they make a frightening amount of sense.

Look at Kobe Bryant with that Mercedes-Benz logo taking up half his chest. And then imagine Jon Hamm’s mellifluous Mercedes commercial narration voice — “Performance is not about doing one thing well — it’s about doing everything well” — as Kobe puts his head down and goes 1-on-4 into the paint. It just feels right. And then there are the locally sourced corporate tie-ins. Don’t they make more sense than the arbitrary mascot names teams currently use? (And use without compensation?)

Golden State gets paired up with Google, because the Warriors are near Silicon Valley. This one is excellent because the mock-up of the jersey makes it look like the team is suggesting that the only reason people should go online is to Google “the Warriors.”  It also kind of looks like their name is now the Google Warriors, which is just badass.