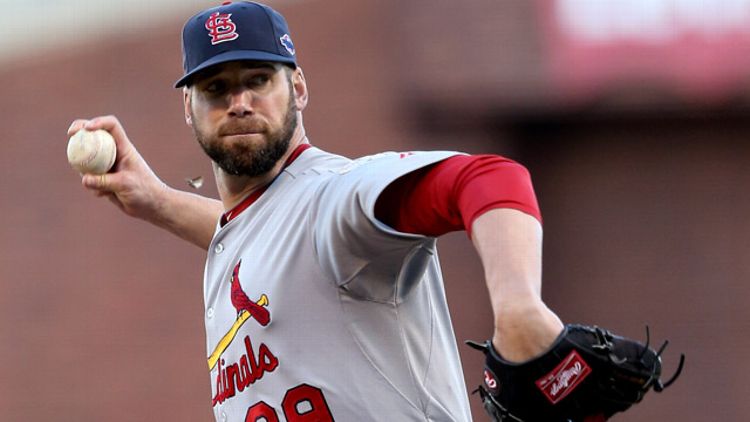 Chris Carpenter will likely miss the entire 2013 season, casting further doubt on the Cardinals’ rotation and raising concerns over the team’s ability to make a third straight trip to the playoffs.

Carpenter’s loss is one of several potential pitfalls awaiting the Cardinals’ staff this year. Jaime Garcia’s supposed to be ready for Opening Day after straining his rotator cuff in last fall’s playoffs, but given the delicate nature of the injury and that surgery was contemplated, that’s no sure thing. Lance Lynn’s second-half fade last season raised questions about his ability to handle a full-season starter’s workload. And Jake Westbrook is Jake Westbrook, a sometimes effective, 35-year-old, extreme ground ball pitcher who misses so few bats that he often appears on the verge of a 12-run strafing.

For nearly every other team, these conditions would be enough to torpedo a season. For the Cardinals, it’s just the latest challenge for a team with a recent history of smashing them.

Flash back to 2012: Albert Pujols had just bolted for Orange County. Carpenter would miss the start of the season with more arm trouble, and go on to toss just 17 innings all year. Adam Wainwright was a wild card, a front-line pitcher now tasked with coming back from Tommy John surgery. The sharps didn’t think much of what looked to be a decimated team. Fresh off winning the World Series, the Cards got pegged for just 85.5 wins, per Vegas oddsmakers. What the experts hadn’t counted on was the Cardinals calling in the cavalry. The offense didn’t miss a beat sans Pujols (or, for that matter, with 2011 beast Lance Berkman missing most of the season): Carlos Beltran cranked 32 homers, while younger talent like Allen Craig and Matt Carpenter excelled in their first taste of semi-regular playing time. The pitching staff was also resilient: Kyle Lohse enjoyed the best season of his career, Lance Lynn struck out more than a batter an inning and was a big asset in his first regular turn as a big league starter (despite the second-half drop-off), and a new wave of talent that featured the likes of Joe Kelly, Shelby Miller, and Trevor Rosenthal pitched well when called on. Injuries, defections, and all, St. Louis went on to win 88 games, claiming a wild-card spot for the second straight year.

The Cardinals didn’t make any big moves this offseason, and attrition looks like it might strike the rotation even harder this year than it did in 2012. But pundits who underestimate the Cards do so at their own peril. Keith Law tapped the St. Louis farm system as the best in baseball in his rankings this week. The jewel of the farm system is Oscar Taveras, a 20-year-old hitting machine who raked to the tune of .321/.380/.572 as one of the youngest players in Double-A last year and who gets the no. 2 overall ranking in Law’s top 100 prospects list. If Taveras can crack the big league lineup at some point this season, he could energize an already strong Cardinals attack.

But as it is every year with this team, it’s a collection of lesser-heralded prospects who could make the biggest impact — particularly on the pitching staff. Granted, Miller was a first-round pick and a top-10 prospect per Baseball America last year, and he now projects to crack the rotation, with so many question marks heading into spring training. But there’s also Rosenthal, a 21st-round pick who’s developed an electric arm and has fanned more than a batter an inning himself over the past two seasons in the minors. There’s Kelly, who doesn’t have the same swing-and-miss stuff but filled in admirably as a fifth starter for much of last year. Odds are you’ll hear names like Kevin Siegrist before the season’s done, too, whether to patch the rotation or augment the bullpen.

This is what the Cardinals do. They snagged ninth-round pick David Freese cheap from the Padres and watched him grow into a World Series hero. Jon Jay looked like he could be a solid fourth outfielder, until the Cardinals installed him as their everyday center fielder and watched him flourish. The bullpen, so horrific at the start of the 2011 season, was staffed by an army of young, homegrown, mostly lightly regarded talent by the time the Cards hoisted the World Series trophy.

Last month, I speculated that Lohse would end up back in St. Louis. This was a read of the market more than anything else. With other teams so reluctant to give up a draft pick to sign non-superstar talent, bidders for quality players such as Lohse and Michael Bourn have evaporated. It made all kinds of sense in January for the Cardinals to offer Lohse something like one year, $15 million coming off his excellent 2012 season; it makes even more sense in February, with teams still not biting and the Cardinals’ rotation right now projecting as: Wainwright, Garcia (will he be healthy?), Westbrook (I’ll take the under on league-average or not for him this year), Lynn (can he hold up over 200 innings?), and the untested Miller. Even accounting for all the young pitching talent standing by, Lohse would help stabilize the rotation, even turn some other pitchers into potentially attractive trade bait, should the Cards need reinforcements elsewhere. Cot’s projects the Cardinals’ payroll for 2013 at $106 million right now, and that’s not counting David Freese’s pending arbitration award or the minimum (or near-minimum salaries) that await the big batch of pre-arbitration players at the back of the roster. Still, in what figures to be another tough NL Central race against the loaded Reds, the Cardinals would do well to hedge their bets if a short-term deal is all it takes.

As for Carpenter, if this is the end, it’s been a pretty damn good career. Jayson Stark queried the best stretches for pitchers over 30 of all time, and found Carpenter’s name among an elite group that includes Randy Johnson, Pedro Martinez, Roy Halladay, Curt Schilling, Kevin Brown, John Smoltz, and a bunch of early-20th-century all-timers like Cy Young and Walter Johnson. Injuries robbed Carpenter of several years in and after his prime, and he might well end his career by making $12.5 million while throwing zero pitches in 2013 (but yeah, A-Rod is totally retiring and forfeiting more than nine times that, uh-huh). But in between, he churned out multiple elite seasons for the Cardinals, including 2005’s Cy Young–winning campaign, plus several postseason gems, including the biggest start of his career. For all the time and opportunities missed to injuries, we’ll remember Chris Carpenter for all that he did, not all he might have done.