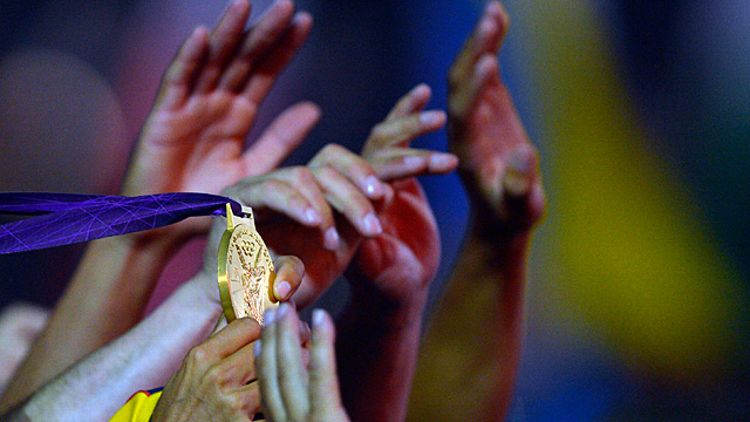 Here in the U.K., everybody’s going crazy over Britain’s Olympic Heroes, and with good reason. But Team GB’s performance wasn’t that surprising; they won slightly more golds than predicted, but a few fewer medals overall. A tremendous performance, but not an unexpected one.

So, which nations did pull off a shock? Who exceeded their supposed limitations, and more important, who completely screwed up? We jammed three sets of predictions (from Sports Illustrated, USA Today, and Sports Myriad) into a spreadsheet, worked out the averages, then compared them to COLD, HARD REALITY. Each nation was then assigned a Grantland Scientific Prediction Versus Reality Score (or GSPVRS). You can see the results here. As is right and proper, gold medals carry twice the weight of lesser baubles.

1. Australia (Predicted: 13.3 golds, 40.7 total; Reality: 7 golds, 35 total; GSPVRS = -18)
The best Twitter joke of the Olympics: “Australians: Make your Olympic boycott more successful by telling us what your demands are.” Team Oz were widely tipped for a glittering Games. In the first week alone, they were favorites to win 10 golds in swimming and cycling. They ended up winning just two, and with a week to go, Australia was in serious danger of finishing below New Zealand on the medal table, which would be roughly equivalent to the USA finishing below Canada. Fortunately for the Australians, their blushes were saved by sailors, who scooped three golds to drag Australia above their neighbors. The downside, of course, is that they now get to spend the next four years pretending that they’ve always been really into sailing.

Pro Tips for Rio 2016:
Well, rugby sevens will be an Olympic sport next time around, but New Zealand will probably win that, so, err … focus on sailing?

2. Kenya (Predicted: 7.7 golds, 14.7 total; Reality: 2 golds, 11 total; GSPVRS = -15)
Australians have several sports at which they (used to) excel; Kenyans have only one. For Kenya, long-distance running IS the Olympics, and this year, they had an absolute nightmare. Take the men’s marathon, for instance. In 2011, Kenya boasted the 20 fastest marathon runners on the planet. Not the 20 fastest times, you understand, but 20 separate Kenyan individuals, each and every one of whom was faster than any non-Kenyan. Despite this, the marathon was won by a Ugandan. It was a similar story elsewhere, with Kenyan favorites failing to deliver in almost every race, and it was only David Rudisha’s extraordinary 800-meter world record that kept Kenya from topping this list.

Pro Tips for Rio 2016
Just a thought, but if you have a guy who breaks the world record in an event, you should probably select him for the Olympics.

3. Germany (Predicted: 12.7 golds, 54 total; Reality: 11 golds, 44 total; GSPVRS =-13.33)
The Germans find themselves in this rundown thanks to their overall medal tally. The tipster hive mind expected Germany to scoop 54 medals this year; they fell short by 10, and their failure would have been greater had it not been for the extraordinary generosity of the London 2012 officials. First, Britta Heidemann assumed the role of the USSR to Shin A Lam’s USA in a fencing reenactment of the 1972 Olympic basketball final. Not to be outdone, officials in the athletics stadium then concocted the biggest cock-up in the history of Olympic field events to gift Betty Heidler a bronze medal in the hammer throw.

Pro Tips for Rio 2016
Continue to be really nice to the officials. It can’t do any harm, can it?

4. Azerbaijan. (Predicted: 4.3 golds, 17 total; Reality: 2 golds, 10 total, GSPVRS = -11.67)
Boxing and weight lifting and judo and taekwondo and wrestling; these are a few of Azerbaijan’s favorite things. Put simply, the Azeris love a rumble, and as one of five nations left in the bidding for the 2020 Olympics, the likely hope was to leave their mark on the London Games by leaving a few marks on their opponents. Things haven’t quite worked out for them, though; seven medals in the wrestling will have pleased Ilham Aliyev (who moonlights as head of the Azeri Olympic Committee when he’s not busy being president), but away from the mat, things weren’t so rosy.

Pro Tips for Rio 2016
Buying medals may be a good strategy. Azerbaijan bought weight lifter Valentin Hristov’s passport from Bulgaria, and he’s rewarded that investment with their first ever weight lifting medal. Ladies and gentlemen, I present to you: The Olympic Spirit!

5. Brazil. (Predicted: 6.3 golds, 19.3 total; Reality: 3 golds, 17 total; GSPVRS = -9)
It took just 29 seconds for Mexico to score against Brazil in their comfortable 2-1 victory in the men’s soccer final, but star players Oscar and Neymar (who should set up an architecture firm) weren’t the only Brazilians to disappoint; most of their compatriots didn’t get near a final. Take women’s pole vault world champion Fabiana Murer, who refused to take her final qualifying jump, citing dangerous conditions; she’s been viciously criticized by retired Brazilian volleyball star Gustav, who has questioned her spirit and bravery. To be fair to Murer, I can’t think of many situations in volleyball where you end up falling five meters headfirst into a box.

Pro Tips for Rio 2016
Take a leaf out of the British playbook: Specialize in sports that have tons of medal events and that no one else takes seriously.

5. Colombia (Predicted: 0 gold, 1 total; Reality: 1 gold, 8 total; GSPVRS = 8.33)
Colombia were tipped to win one medal. They walked away with a record-breaking haul of eight, including a thrilling gold for Mariana Pajon in the women’s BMX cycling, an event the British media had already awarded to local favorite Shanaze Reade. That was only Colombia’s second Olympic gold medal ever; their 2012 haul has boosted their all-time medal count from 11 to 19.

Pro Tips for Rio 2016
A similar level of improvement should see you in the top 10 of the medal table, so just keep doing whatever it is you’re doing.

4. United States (Predicted: 44.3 golds, 98 total; Reality: 46 golds, 104 total; GSPVRS = 9.33)
Team USA return home with more golds than they’ve ever claimed on foreign soil and an unquestionable right to assert their position as the world’s best Olympic team. Sure, the total number of medals has fallen, but — and I hope Grantland’s predominantly American readership won’t mind me saying this — the only reason you won so many silvers and bronzes in Beijing is because China kept kicking your arse. As an outsider, it’s nice to see you on top of the actual medal table that everybody else uses.

Pro tips for Rio 2016
Thirty-one medals (including 16 golds) in the 32 available swimming events? It’s going to be tough to top this performance. Concentrate on track and field for the next four years.

3. North Korea (Predicted: 0 golds, 1 total; Reality: 4 golds, 6 total; GSPVRS = 13)
North Korea are the Schrodingers of international sports, and one has to feel a little sorry for tipsters trying to predict what will happen when they flip open the box and unleash a bunch of largely unknown athletes on the Olympics. This year, those making the predictions considered the possibilities, shrugged, and marked the PRK down for one non-gold medal; when the box opened, a bunch of world-class weight lifters poured out and snagged three golds and a bronze. Another gold in judo and a wrestling bronze completed the set.

2. South Korea (Predicted: 8.67 golds, 23.3 total; Reality: 13 golds, 28 total, GSPVRS = 13.33)
While tipsters can be excused for misreading South Korea’s secretive neighbors, it’s harder to explain why they got this one so wrong; South Korea’s dominance in weapon-based sports is incredible, and they helped themselves to a huge number of golds in archery, shooting, and fencing. If it weren’t for the aforementioned fencing clock snafu, South Korea would be top of the GSPVRS with a score of 14.33.

Pro Tips for Rio 2016
Offer to provide all the timing equipment.

1. Hungary (Predicted 3.3 golds, 12.67 total; Reality: 8 golds, 17 total; GSPVRS = 13.67)
And so to our champions. When it comes to punching above your weight, you don’t get punchier than Hungary; they’re the eighth-most successful Olympic nation of all time and have more Olympic medals than China. That’s an impressive feat for a country of just 10 million people. Traditionally, they specialize in fencing and the throwing events, but after a disastrous turnout in Beijing (where their three golds represented their worst Olympics for 84 years) no one gave them much hope in London. Their eventual ninth-place finish on the medal table has been hailed as “way beyond a miracle” by a Hungarian official — a wildly hyperbolic way to describe an unusually large number of canoe sprint medals, you might think, but one thing’s for sure: No one predicted it.

Pro Tips for Rio 2016
Yeah, like I’m going to tell Hungarians how to do their business.