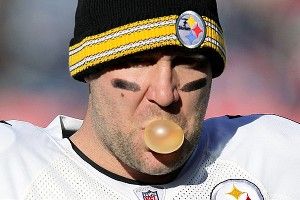 Generally, in all walks of professional life, the last thing you want to feel after having a meeting with someone is confused. That’s really the only point of a meeting. To lessen any confusion you might have. That’s my working theory, at least. But then I’ve never been in a meeting with Todd Haley.

“I get a little confused at times because I know so much has been made about us quote-unquote throwing the ball too much, or we’re going back to Steeler football and running the ball more … But in these meetings I’ve had with coach Haley he’s all about the no-huddle, and using our wide receiver weapons, and throwing the ball, and stuff like that, so I’m still confused,” he said. “I’m not sure what’s going to happen yet.”

Love Ben’s use of air quotes when referring to throwing the ball too much, love the slightly derisive reference to “Steeler football” and especially love him calling himself confused despite going through this meeting process with Haley.

Bruce Arians’s system, which seemed to get increasingly vertical and occasionally hallucinatory as speedsters like Mike Wallace and Emmanuel Sanders came into their own, was very much tailored to Roethlisberger’s playground football sensibilities. The plays Arians called seemed like an extension of the big quarterback’s footballing personality.

Haley is, of course, a capable and accomplished play caller. But he also is known for thinking of himself as such. There will be plenty of meetings, on the field and off, to come between the two. It’s worth keeping an eye out to see if they can get on the same page.