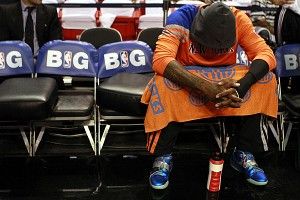 The Resurrection and Re-Murdering of Mike Bibby

There was a moment Wednesday night when Mike Bibby was the best basketball player in America. Off to an energetic start in the first quarter before a crowd of no more than 342 Miamians, Bibby pressed the Knicks offense into an early cluster of 3-pointers, brisk pull-up jumpers, and lithe dunks. Melo slashed. Amar’e skied. J.R. Smith didn’t totally ruin everything. There Bibby stood, a 33-year-old third-string point guard on a gasping seventh seed playing for their lives against the presumptive conference champs, and he was running things. And man, was he out of breath.

Mike Bibby has been little more than an afterthought on this Knicks team as, approximately, the squad’s 14th most interesting person. (Even Toney Douglas briefly became a cause célèbre among die-hards.) Bibby is at the very end of a more than respectable career: A national champion with Arizona. A key cog in one of the most exciting offenses of the past two decades. A man of unerring warmth. When Bibby was traded to the Hawks in 2008, he helped transform the team, leading it to its first playoff appearance in nine seasons. (The Hawks haven’t missed since.)

Wednesday night felt like a swan song of sorts, though Bibby hasn’t intimated that he’ll retire. With Jeremy Lin and all of his branding opportunities on the back burner until next fall and Baron Davis’s knee in a Shaun Livingston-ian sort of place, Bibby played 36 minutes, the second-highest of his season and just the fourth time he crossed the 25-minute mark all year. Still, he stayed low (because he can’t jump) and kept firing (because, please, no more J.R. Smith). Perhaps it had something to do with Dwyane Wade’s jab before the game. “We know Mike has made more shots in this series than he made all last year [with the Heat],” Wade told the Sun Sentinel. “Send that to Mike.” (Wade also did this earlier in the series, which is not cool.) Bibby was shockingly heroic in Game 4 in particular. So when he started rolling early on, it appeared vengeance was all Bibby would consider. But then it all started to come apart, because only youth knows no pain. The man simply just got tired. His face became a mask of ache. By the third quarter, things like this were happening:

If you watch the replay closely, you’ll notice Bibby, thinking better of having his dome split by Wade’s pterodactyl elbows, fail to roll to the weak side and instead mutter “Oh s%*@!” mid-dunk. Bibby finished with 10-6-6 Wednesday night, not bad for an old hound. And if that’s all, well, it was worth it. — Sean Fennessey

Charles-ism of the Night, Presented Without Commentary

“DeAndre Jordan, if you left him in the gym, all night by himself, and told him he couldn’t dunk, he’d have six points in the morning.”

Chris Paul’s groin and Blake Griffin’s knee might be Vinny Del Negro’s major concerns on the flight back to L.A. from Memphis. But if he’s making a “Things I Am Concerned About” list on that piece of paper he always seems to have in his hand, he might want to jot down, “Try to Discourage Getting Back-to-Back-to-Back-to-Back Technical Fouls.”

The Clippers play on an edge, and Wednesday night they fell right off. Simmons wrote about Chris Paul’s “Look” on Wednesday. In the third, Paul didn’t take kindly to a Marc Gasol pick and more or less told Gary Zielinski that next time, if he didn’t get the call, he was going to elbow Gasol. Zielinski T’d him up. And then he T’d up Caron Butler, and then his buddy Bill Spooner T’d up Mo Williams and Vinny and I actually thought, What if Nick Young has to play point guard for the rest of this game?

“I give the guys credit. We know what we have to do. We have to get home, get some therapy and get some rest,” Del Negro said after the game. I agree with him (for once). It just might not be the therapy he’s thinking of. (PS: If VDN really needs to talk these guys out of ever getting a technical foul again he should just show them Williams playing hero ball Wednesday night. That should hopefully do the trick. Were the two connected? Everything is connected, man!) — Chris Ryan

Check this out. Zach Randolph trying to get Chris Paul tossed in the third quarter. I don’t know why this is hilarious to me, but it is really hilarious to me. I feel like this is the equivalent of Apocalypse Now–era Dennis Hopper telling you to relax. — Ryan

Amar’e fouls out after bowling over Battier, offers him a helping hand, and then pulls it away at the last second. Say what you will about maturity levels and appropriate game conduct and winner mentality, but how perfectly executed was this classic psych? Being mean on purpose > being mean accidentally. Anyway, bathe in the thrown shade, New York.

2. Landry Fields Catching LeBron James Right in the Dome Piece With a Pass

Always great for the team that crushes you to feel at least some modicum of literal (non-permanent/serious) pain, and so thinking about LeBron shaking the sting out of his eyeballs for a few minutes a day over this long, tough offseason might just help you stay sane. Points deducted for Fields thinking he was passing the ball somewhere that wasn’t LeBron’s face. — Amos Barshad

If someone asked, “What’s the most amazing thing J.R. Smith could possibly do in a basketball game?” there isn’t a reasonable answer. Um, drill 17 3-pointers? Reverse-dunk from the foul line while Hologram Tupac rides on his shoulders like a shimmering gargoyle? Go 0-for-40 from the field?

At some point, unlimited potential becomes unrealized potential. Since the 2007-08 season, when Smith ran wild in Denver with Carmelo and Iverson, his performance has slumped downward. Despite hooping in China during the lockout, he played as if returning from a three-month dumpling binge: He shot 41 percent from the floor, 35 percent from long-range, and 71 percent from the line (all near career lows). The tumultuous stint on the Zhejiang Golden Dragons did little to improve his infuriating habits. No coach has ever taken J.R. aside and said, “You know that thing you always do, the series of crossovers that leads to an off-balance 20-footer off your back foot? We need to see more of that, kid.” But he won’t stop. As he said after the Knicks’ win in Game 4: “Being a shooter, you have to have a short-term memory.”

Against the Heat, Smith shot 32 percent. Without options like Lin or Shumpert available to save him (and the Knicks) from himself, the hemorrhaging only worsened. In the last three games, he bled out, going 11-for-48 from the floor and 1-for-17 from behind the arc. Only hours after his team was eliminated, he addressed haters on Twitter: “Damn didn’t know this man[y] people didn’t want me in #NY might just get what you asking for! #sorrykidz.”

Damn didn’t know this man people didn’t want me in #NY might just get what you asking for! #sorrykidz

Despite his shooting woes and troubled relationship with social media, it’s difficult not to like J.R. There’s a whimsical, good-natured goofiness to everything he does, and he’s more overconfident than selfish. But no matter how intoxicating his ability, the reality is sobering. — Ben Detrick