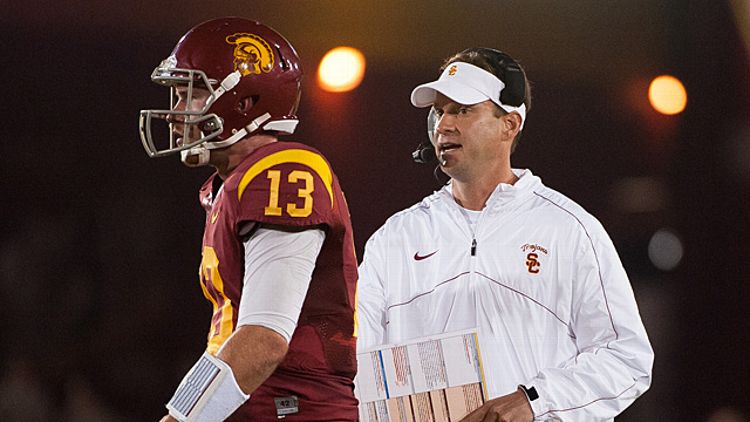 1. Jadeveon Clowney
Until the year 2013, if you had asked me to cite off the top of my head the greatest defensive play in college football’s recent annals, I might have noted this, or made a blatantly homerish reference to this. But that era has ended, because I have been told by a seismographer of questionable repute that Jadeveon Clowney’s hit during yesterday’s Outback Bowl actually triggered a minor aftershock at the breakfast buffet of a Shoney’s in St. Petersburg.

The best part of this is not Clowney serpentining past an offensive line that had clearly made an executive decision to stay the hell out of his way; the best part is not when Clowney pulls a straight-up Joffrey on Michigan running back Vincent Smith. And the best part is not even that this hit occurred largely because the referee, whose pregame coconut shrimp had apparently been laced, awarded Michigan a first down it clearly did not deserve the play before. No, the best part is when Clowney scoops up a football in his palm like it is a stray eyeball he inadvertently knocked loose on his way to wreak havoc at King’s Landing. I do not know if Clowney will win the Heisman Trophy next season, but 2013 might be the first year in my lifetime that a defender is considered the favorite heading into the fall, and it will all be based on a single play. Honestly, if the Gamecocks play him at fullback next season, this may be the first Steve Spurrier–coached team to go an entire season without throwing a pass.

Because Northwestern is now one of the most reliable football schools in the Big Ten, and Stanford is the ascendant Pac-12 program, and Rice has won two bowl games in five years, and Vanderbilt is — even by the SEC’s fanatical standards — “pretty good,” and Baylor may capture the Big 12 title next season, and Duke … well, let’s be honest, no one wanted that anyway.

I mean, there’s Georgia, and Boise, and Clemson … but honestly, can we just run that GIF one more time, Chris Ryan? This thing has more layers than The Master. I feel like I’m still processing.

I don’t really know what this means, but I’m also still not sure if Florida State is on the verge of recapturing its former greatness or on the verge of disappearing down yet another rabbit hole of indiscipline and inconsistency, so this seems like as good a slogan as any. (It is also possible that Vince Williams is a massive Albert Brooks fan.)

Remember when these were ascendant programs being showered with praise by sycophantic journalists with an appreciation for the contentious and the dramatic? Good, because I don’t, either.

It appears somebody got a copy of The Secret for Christmas.

On December 28 in Orlando, Virginia Tech defeated Rutgers, 13-10, in a game so patently unwatchable that it drove at least one newspaper columnist to a jag of existential despair straight out of Camus. The Hokies finished with three rushing yards, the quarterbacks combined for 47 incomplete passes, and the teams were a combined 8-for-40 on third-down conversions. Afterward, Rutgers coach Kyle Flood actually stood up for quarterback Gary Nova, who made so many curious throws that you started to wonder if Scott Bakula had inhabited his consciousness in the second quarter. It was the embodiment of the worst of the bowl system, a frivolous and needless contest sponsored by a nondescript apparel company and featuring two teams that almost certainly would have been better off staying home and writing a five-page treatise on Sartre’s Being and Nothingness.

I, of course, watched the whole thing.

Leighton Baines Just Opened a Stargate With This Free Kick