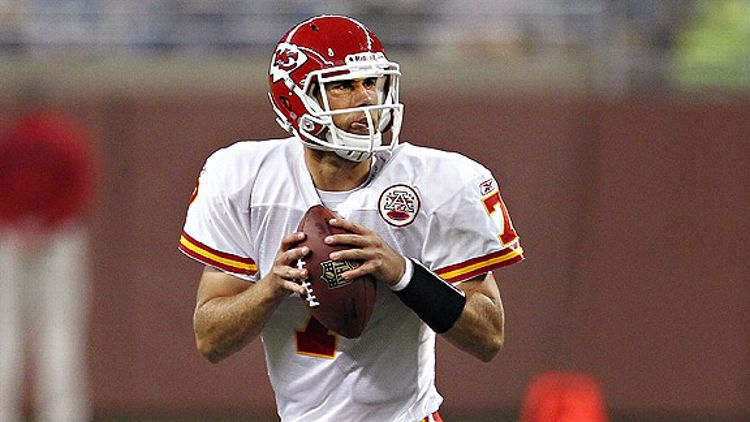 Week 2 of the Bad Quarterback League demonstrated just how difficult it is to be an NFL QB, unless your name is Cam Newton, then it’s no big deal. We saw two benchings, two game-winning drives and two teams that were inches away from triple-digit scoring. We also had our first 24/7 points with two votes of confidence.

After Tony Romo’s fourth-quarter bed-wetting in Week 1, Cowboys owner and general manager Jerry Jones said this about his quarterback: “We are going to rise and fall based on what Tony Romo’s about over the next several years, and I’m excited about that.” This is a terrifying proposal for Dallas fans, but exciting news for BQBL Cowboy owners.

After Kyle Orton threw a pick and then just kind of gifted the ball to Oakland Raiders in Denver’s season opener, a group of fans announced plans to use billboards to lobby the Broncos to start Tim Tebow instead. There was enough anti-Orton sentiment around the Rockies, coach John Fox felt it was necessary to say: “Kyle is our starting quarterback.” Brandon Lloyd also said, “Whatever. He’s our quarterback, and we’re going to eventually win games.” Fox’s statement counts as an official BQBL vote of confidence. Lloyd’s was more a cry for help.

On the field this week, Tony Romo and Ben Roethlisberger were redeemed, Rex Grossman was victorious and some dude named Luke McCown took his first step toward becoming the head coach of his high school alma mater’s football team. On to the scores …

Jacksonville Jaguars (Luke McCown and Blaine Gabbert), 98 Points: Imagine you are Luke McCown. You have been a backup NFL quarterback for eight years and now, all of a sudden, you’re a starter. You lead the Jacksonville Jaguars to an ugly Week 1 win and head into the Meadowlands to face the New York Jets thinking this is the day you have been waiting for. You’re going to prove every coach, every teammate, and every fan who ever doubted that you have what it takes to make it in the league wrong. Then you take the field and throw four interceptions. But you don’t just throw four interceptions, you throw four “what the hell were you thinking, Luke McCown?” interceptions. As if your day wasn’t bad enough, you are benched, and you watch rookie Blaine Gabbert go five for six as you hold that familiar clipboard. After the game your friends don’t even answer your calls, so you call your mom, who musters up the most encouraging words she can: “Don’t worry, Luke. At least you’re better than your brothers, Josh and Randy.”

Kansas City Chiefs (Matt Cassel and Tyler Palko), 93 points: Remember when Matt Cassel was Tom Brady light in New England? Now he’s in Kansas City and has led the Chiefs to a 0-2 start in which they have been outscored a combined 89 to 10. The Chiefs were a savvy pick in the BQBL; after Cassel threw three picks and lost a fumble Sunday, he was benched and Tyler Palko took the field. If you think Palko’s name sounds familiar, you are either a big fan of the California Redwoods or you have him mistaken for an extremely entertaining game played on The Price Is Right.

Seahawks (Tarvaris Jackson), 26 points: This could easily be Tarvaris Jackson’s best game of the year and his team didn’t score a single point. He was 20 for 29, didn’t throw a pick, and at press time his penis had not appeared on a sports blog.

Colts (Kerry Collins), 26 points: You know the Colts are in trouble when they don’t have a passing play over 20 yards, the only Peyton scoring is on the other team and there are tweets about the offense being taken over by Jeff George.

New England Patriots (Tom Brady), -17 points: Chill out, Tom Brady. Going 31 for 40, throwing for 423 yards and having no interceptions is not doing anyone any favors in the BQBL. Brady has been so good the first two weeks of the season, it is hard to figure out how the Pats are going to lose in the playoffs again. If you own the Pats in the BQBL, you better hope that Brady gets injured or they go 12-0 and start running the wildcat just to mess with Rex Ryan.

Philadelphia Eagles (Michael Vick and Mike Kafka), 23 points: No, Mike Kafka is not the same Kafka who wrote a novel you were assigned sophomore year in college but never read. That is this guy.

Baltimore Ravens (Joe Flacco), 23 points: Waka Flacco Flame went 15 for 32, had two interceptions and was outplayed by Matt Hasselback. This is exactly what BQBL Ravens owners were expecting out of him last week.

San Diego Chargers (Philip Rivers), 18 points: Rivers is racking up turnover points, but he hasn’t been berating his coaches and teammates nearly enough. How many interceptions is he going to throw to 450-pound linemen before he goes Christian Bale on Norval?

Miami Dolphins (Chad Henne), 16 points: To be fair, Henne’s only interception came as he was hit while releasing a pass, but he was also one incompletion away from a sub-40 percent outing. Next week, Chad. Next week.

New York Jets (Mark Sanchez), 16 points: Sanchez threw two picks and only had 182 yards, but his team was facing Luke McCown so no one noticed.

Carolina Panthers (Cam Newton), 15 points: Cam Newton is the best quarterback in NFL history who has never won a game.

Eds notes: A spreadsheet of our scorecard is at the bottom of this post.