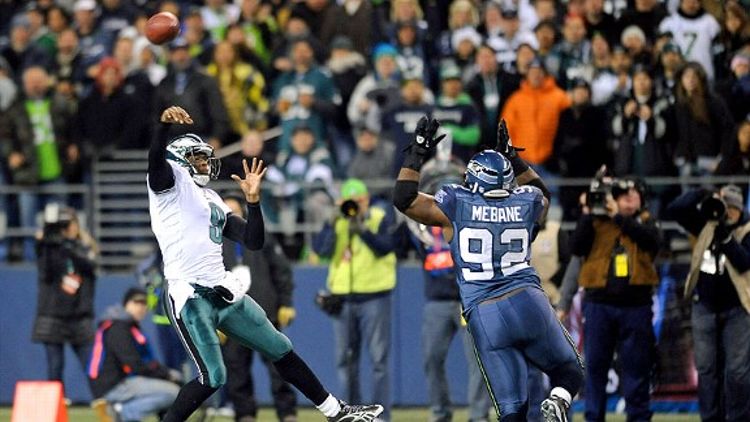 Despite their best efforts, T.J. Yates, Tyler Palko, and Kevin Kolb all won NFL games this week. Not BQBL games — actual professional American football games. Yates won because a defensive hold negated his pick-six, Palko won because he was up against Caleb Hanie, and Kolb won because, well, there’s only one way to put this: Dallas coach Jason Garrett iced his own kicker. Oh yeah, you know who else won? The greatest quarterback in the history of the NFL: Timothy Richard Tebow.

Timothy Richard Tebow’s success has gone from shocking to flukey to confusing, and has finally landed on expected. I watched the Broncos-Vikings game in a bar Sunday, and as it entered the fourth quarter, every completed pass, positive run, and cutaway to Timothy Richard on the sideline was met with screams and chants of “Teeeeeebooooooooow!” There was not a single soul in the place watching another game or rooting against Timothy Richard. Now that Timothy Richard has a hold on the division lead, there is only one man, one bad quarterback on the planet who could loosen his hold on the zeitgeist — The Gunslinger, Brett Lorenzo Favre. Please, please, please return, Gunslinger. Please, Gunslinger. The Bears need you, the BQBL needs you. Besides, we all know you’re jealous of the attention Tebow is getting. We all know how much you love to see your face on ESPN.com. Just think about how good it would look on the BQBL Summer Jam Screen.

This week there was no Gunslinger, but let’s have a look at the BQBs who turned in some truly pick-tastic gunslingeryish performances:

At one point in the fourth quarter, Vince Young went over to the Eagles bench and put his head in his hands. He made a face so troubled, so wrought with self-doubt and shame that the physical act of making this face is only possible if: you just found out your dog died, you totaled your car, your spouse is cheating on you, you are being audited, there is an unflattering video of you on WorldStarHipHop.com, or you just gifted the Seattle Seahawks the ball, a touchdown, and the game on national television. Vince Young did the latter. Oh no, wait — actually, Vince has done the last two, but we are here only to focus on his embarrassing performance on the field, not his embarrassing performance in the back offices of jiggle joints.

In the fourth quarter, with the Eagles only down 10 points despite the two picks that Vince had already thrown, DeSean Jackson’s apathy, and Marshawn Lynch’s Skittle-fueled domination of the Eagles defense, Vince drove the Eagles to the Seahawks 22. Momentum had shifted, and watching the game you had a feeling the Eagles were going to eventually come back and win. Young changed all that. With 4:39 left in the fourth, Vince thought his running back LeSean McCoy was wide-open in the flat with plenty of room to run. He was not. David Hawthorne was there to snatch the early Christmakwanzakah gift from Vince, and it was he who had plenty of room to run. Soon after, Vince was on the bench, alone, making the aforementioned face. There are some athletes who are inspired by their mishaps. They channel the anger and disappointment to fuel their performance and turn the rest of the game into a mission of redemption. Not Vince Young. Young took the field and threw a fourth interception on his very next pass attempt.

This season, Vince Young and the Eagles have turned Philadelphia fans from excited optimists to hammered, hateful, and hopeless cynics who are ready to revolt. I was pleased to learn that the Christmas Eve game against the Cowboys will be in Dallas. It would ruin the holiday spirit if they had to dress the Lincoln Financial Field sideline Santa like he was about to disarm a bomb like the dudes in The Hurt Locker.

Time: 10:16 left in the first quarter
What Happened: Three-and-out. Chiefs muff the punt and the Bears get another chance.
Lovie’s Post-Possession Words of Encouragement to Hanie: “Turn around kid, you just got another chance to show the world what you’ve got.”

Time: 5:37 left in the first quarter
What Happened: Three-and-out. Forte injured during possession.
Lovie’s Post-Possession Words of Encouragement to Hanie: “Hey Hanie, bad news, looks like Forte is out for the game. Good news, ummm, ahhhh, I’ll get back you on the good news.”

Time: 1:28 left in the first quarter
What Happened: Three-and-out.
Lovie’s Post-Possession Words of Encouragement to Hanie: “Don’t sweat it Caleb. The Chiefs can’t score either, and they’re starting Tyler Palko. We should get a safety or a runback or something, so don’t feel too much pressure to advance the ball.”

Time: 9:49 left in second quarter
What Happened: Field goal.
Lovie’s Post-Possession Words of Encouragement to Hanie: “Caleb, is that a number next to our name on the scoreboard? Well done little fella, those three points should win us the game barring some sort of insane Tyler Palko Hail Mary touchdown right before the half.”

(Insane Tyler Palko Hail Mary touchdown right before the half)

Time: 6:16 left in third quarter
What Happened: Interception on first play from scrimmage.
Lovie’s Post-Possession Words of Encouragement to Hanie:“Hey, if you are going to throw an interception, 40 yards downfield is the place to do it.”

Time: 0:23 left in third quarter
What Happened: 51-yard drive on five plays, then two sacks and a missed field goal.
Lovie’s Post-Possession Words of Encouragement to Hanie: “You actually helped us on that drive, kid. You passed for one more yard than you lost us in sacks. Appreciate it.”

Time: 12:40 left in fourth quarter
What Happened: Three-and-out.
Lovie’s Post-Possession Words of Encouragement to Hanie: “Good news, you ran for three yards on second down. Bad news, you were sacked for -13 on third down.”

Time: 4:10 left in fourth quarter
What Happened: 46-yard drive to the Kansas City 13. Then an interception.
Lovie’s Post-Possession Words of Encouragement to Hanie: “At least you aren’t engaged to a reality TV star.”

Time: 2:00 left in fourth quarter
What Happened: Five-play drive for 10 yards that featured two sacks and two incomplete passes, one on 4th-and-17 from the Bears 40.
Lovie’s Post-Possession Words of Encouragement to Hanie: “You know what kid, I’m not even going to sugarcoat it anymore. You suck.”

Time: 0:06 left in fourth quarter
What Happened: One play, interception.
Lovie’s Post-Possession Words of Encouragement to Hanie: “Do you have Brett Favre’s phone number?”

Kansas City Chiefs (Tyler Palko and Kyle Orton) 41 points: Palko managed to be a wee bit less inept than Hanie, but still inept enough to get benched. You know your team has no faith in you when you get benched after only one quarter, and you have no turnovers and aren’t losing. Out went Palko and in went Orton, the man who was released after Timothy Richard Tebow established himself as the greatest quarterback to ever play the position. (I can weave a Tebow mention into anything.) I have always suspected that starters who are replaced pretend to be supportive but secretly sit there stewing, wishing horrible things to happen to their backups. Here is a transcription of Tyler Palko’s thoughts as he watched Orton replace him at quarterback:

“For real? You aren’t even going to let me finish the half? You know we are playing the Bears without Forte and Cutler. Even I couldn’t mess this one up. Besides, that dude was benched for Tebow, a man who passes the ball like he is using his weaker hand. Now I am standing here next to Ricky Stanzi. How did this Stanzi guy get a rap song and I didn’t? And it has a guitar solo. Anyway, they’re running a flea flicker for Orton? That isn’t even fair, flea flickers always work. I hope this goes incomplete. You know what? I hope he gets injured. I hope he smashes a finger on his throwing hand and can’t … oh my god. He smashed his finger. Did I just do that with my brain?”

After Palko smashed Kyle Orton’s finger with his brain, he returned to the field to score what would be the game-winning touchdown … in preposterous fashion. He threw a Hail Mary that Brian Urlacher (with some help) batted down right into the arms of Dexter McCluster. It was so ridiculous the only explanation for it is that Tyler Palko willed it to happen with his brain.

Minnesota Vikings (Christian Ponder), 33 points: I am going to be honest, I do not actually think Tyler Palko can will things to happen with his brain. However, I am 100 percent positive that Tim Tebow can. (Unnecessary Tebow mention no. 3.) How else can you explain Christian Ponder’s pick-six and late-game Romo?

Tennessee Titans (Matt Hasselbeck), 32 points: I have no proof that this game happened. I didn’t watch it, didn’t see the highlight, and refuse to believe that Hasselbeck and Ryan Pickspatrick played an entire game with throwing an interception. That is just crazy talk.

Oakland Raiders (Carson Palmer), 30 points: What happened, Carson? This loss really ruins the predetermined narrative I had for you. I was telling everyone who would listen (read: no one) that if you looked at the numbers, aside from that first game, Carson has actually done a great job and the Raiders were going to lock up the division and maybe even get a sneaky playoff win. This game is a good example of the inherent problem with the whole “if you look at the numbers” thing. Carson had two TDs, 273 yards passing, and only one pick, but was never, ever even remotely close to making this game competitive. The Raiders will not win the division and will not get a sneaky playoff win. At least not as long as Timothy Richard Tebow can still will things to happen with his brain. (Four unnecessary Tebow mentions? This is getting embarrassing.)

St. Louis Rams (A.J. Feeley), 26 points: When I saw that A.J. Feeley had led the Rams to a shutout loss in San Francisco, I immediately Googled the Rams depth chart to figure out why he was not benched. There I found the reason: Tom Brandstater. Hey, Rams. Seems like Chicago isn’t interested in a certain fella in Mississippi who would be a great fit for you and an even better fit for the BQBL. Give the Gunslinger a call!