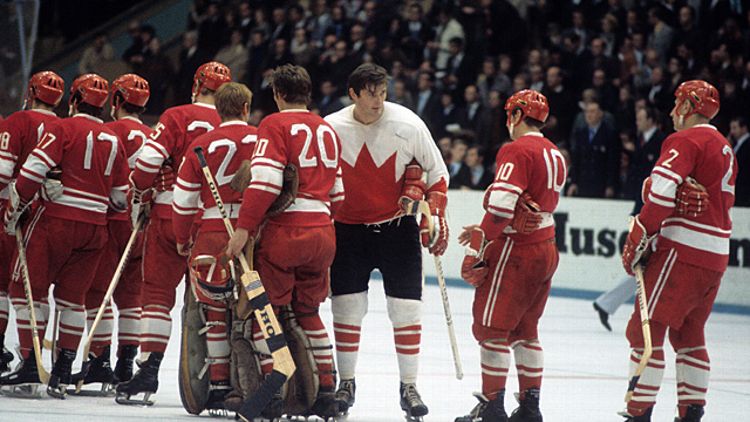 The end of the hockey lockout couldn’t have come soon enough for our friend Norm Macdonald. Here’s his take, along with a retooling of his thoughts on the 1972 Summit Series, which ran in a slightly different form as a collection of tweets on his Twitter feed back in September of 2012.

“Our long national nightmare is over, Norm.”

They were a bunch of yahoos from Calgary in Vegas for the weekend. They must have spotted a Montreal Canadiens cap that I had forgotten was on my head. I was sipping coffee and waiting for football to start, just sitting at the back of the book. I got slapped on the back by a few of them. They were reading from their phones and telling me how Bettman had backed down, the sonofabitch, how they’d been up all night mediating, how they’d be playing 50 games starting in a couple of weeks, but how it didn’t matter much for my Habs, though. We all had a good laugh about that one.

“C’mon, Norm, let’s get you a Labatt’s and do a little celebrating.”

“Never touch it, thanks.”

“C’mon, a Canadian without a beer?” said the biggest of the bunch. “That’s like an American without a handgun.” He downed his Brador like it was a shot. We all had a good laugh about that one too.

One of the cowboys seemed a little sullen. “Well, I don’t care if there’s a season or not. I’m sick of it all. I’m gonna boycott the hockey. They don’t give a damn about the fans.”

“You’re no fan,” I said. I’d met plenty like him. Any Canadian has. Eddie Shore. Old-time hockey. That malarkey.

The cowboys whooped and hollered away. I returned to my coffee at the back of the book and picked up a Las Vegas Sun News, but there was no mention of the settlement yet. News that fresh you gotta get from a roaming band of cowboys.

He looked at his screen. “Early futures should be up tomorrow. Maybe late today.” Guess he’d heard. Sammy started talking about all the things I don’t know about. Collective bargaining, revenue sharing, salary caps.

Back to the computer screen. “Says they left that out.”

“Well, I’ll be damned, Sammy. I got tickets to Sochi next year. I wanna see Canada beat Russia on their ice. I’ve never been to Russia, Sammy. I got a ticket to the 2014 Olympics and I’m damned well not going there to see Russian women on sleds.”

“You see enough of that filth on the Internet, right?” said Sammy.

I went back to my seat and my coffee. I was up way too early, looking for golf in Hawaii that wouldn’t be played that day and thinking too much about the Redskins. But this hockey news made me very happy. I was thinking about how I’d be in Russia next year, everything would work out all right, and I’d see my boys beat the Commies. Same way I saw it 40 years ago.

I am 8, going on 9. Canada had never won hockey’s gold medal at the Olympic Games. You see, the Soviet amateurs, all servicemen in the Red Army, are very good. The captains and colonels and majors all found time in their busy schedules to practice their forechecking. In 1972, they decide it’s time to play the real boys of winter. The Summit Series is born, with the first game being played in The House Richard Built, the Montreal Forum. The Canadian contingent, made up of the best NHL players, are the overwhelming favorites.

No less a broadcaster than the mighty Foster Hewitt, the man who first said, “He shoots, he scores!” is lured out of retirement to voice it. Hewitt ends up having as much trouble with the French-Canadian names as he does with the Russians. His mangling of Yvan Cournoyer’s name is especially vexing to me. Cournoyer is my hero. I’ve never seen a hockey game from the Forum not called by Danny Gallivan and Dick Irvin, but this was history and so was Foster Hewitt.

The series has been constructed as an eight-game exhibition with no overtimes. My friends and I are outraged. This leaves the specter of a tie in play. THAT’S NOT HOCKEY!

Game 1: The men on the ice in pregame look odd. Buzz cuts, workmanlike, without style. Odd. I am only 8. I don’t know what CCCP means. I still don’t. The puck is dropped and the Cold War begins. Three hours later, I’m left inconsolable: eyes stinging, cheeks wet, nose running. 7-3? Impossible. I am as stunned as Kenny Dryden must be.

The next game would be played in Toronto, the only one I would see live. In Maple Leaf Gardens things go well, with the universe unfolding as it should (as our prime minister is fond of saying). Canada wins easily, 4-1. Tie series. On to Winnipeg, where Bobby Hull is seen sitting in the crowd at his own arena, ineligible to play since he left last year for the upstart WHA. And here in Winnipeg, my worst fear comes true. Hockey anathema. A tie. Series remains even.

We are all bitterly disappointed. This is not how it was supposed to unfold at all, this tiny corner of the universe, but I study my hockey cards and tell my friends not to worry. But I am worried. Very worried.

Vancouver hosts Game 4, our final home game before we finish the series in Russia. I watch on TV with my friends and we can’t believe what we are seeing. Long before the puck is dropped, the crowd begins booing my heroes. Some are cheering the enemy. Team Canada, bewildered, stripped of home-ice advantage by its very countrymen, never has a chance. After the loss, Boston scoring machine Phil Esposito skates to center ice and lashes out at the fans. Shame on you, Canada. Shame, indeed.

And now my heroes land in Russia. None has ever been there. The Russians put them up in a decidedly shabby hotel and surround them at all times with an intimidating KGB presence. We play the next day and the crowd proves to be the extra man. The refs prove to be the extra three men. And we lose.

Back home in Canada, the old folks start saying the Russians have a better team and play a better style of hockey (old-time, never unmoving). The kids disagree. The Russian players are household names in Canada now. Kharlamov, Yakushev, Tretiak. Game 6 is coming and we are very scared. We are down 3-1 with the stupid, stupid tie. But in Game 6, a clash of political ideologies gives way to a clash in how the game of hockey is played. Old-time hockey will meet the new style. It happens when assistant coach John Ferguson, the first goon ever, calls Bobby Clarke over to the bench for a word. Clarke, the toughest great player of all time, is told by Ferguson that Kharlamov’s ankle looks sore and might need some attention. Clarke, like a surgeon, fractures his ankle in a flash of a stick, sending Kharlamov hobbling out of the game and back to military service.

Who’s intimidated now? Canada prevails 3-2 in a low-scoring game (by this series’ standards, anyway). The winning goal is scored by Paul Henderson. The Red Army would play the Flyers years later. They would remember Bobby Clarke. Bobby would remember Moscow, and Flin Flon too.

We go to Game 7, the penultimate, with our hopes of winning the series pretty much gone. We need this game badly or we’ll have to start the eighth and final game as losers. My friends and I all agree that if we lose tonight, then Game 8 will see the ice of Moscow stained red with Russian blood. We win 4-3. The winning goal belongs to Paul Henderson.

We’re even again. It is a one-game series. There is only one fear, and it is the fear that has stalked me from the beginning of this thing: a tie. That would be the worst. Wait, it just got worse. Word now from the Soviets, the ones who had gone to great pains to make this thing an eight-game series with no overtimes — an exhibition, don’t you understand? — that if the game ends in a tie, they will claim victory because they have scored more series goals.

Game 8. There will be no school in Canada today. History class? Ridiculous. History, instead. In the morning, we are told there is school after all … but it is optional. You can watch the game at home or at school. At school with the older kids from grades 5, 6, and 7. And so the gymnasium at Alexander Wolff School is packed. Blue mats everywhere. Even the teachers are like children today.

“We’re gonna win,” I say to anyone, “You’ll see. Cournoyer will score the winner.”

“Helluva time for Bobby Orr to be hurt,” says the Latin teacher (I can’t remember his name).

The puck is dropped and all is silent. The entire first period is very tough to watch. We get through it. Together. Game tied 2-2. During the first intermission, the gymnasium is alive with raw nerves. The young all say we will win for sure. The old men don’t.

The second period is like a punch in the gut from the school bully. Suddenly we’re down 5-3. I go outside so the big kids won’t see my tears. Mr. McCarthy is smoking a cigarette.

The unimaginable is 20 minutes away now. Our gymnasium is grim — until Esposito scores quickly and we all go nuts and we’re running all over the place. Sitting cannot contain this. And then the greatest moment of my life. Yvan Cournoyer, my hero, scores and ties the game.

My elation has pushed me into the arms of an old lady that teaches me geography. Everyone is everywhere, cheering. And I replay the goal in my mind. And I see that something is missing. The red light.

And I see Mahovlich climbing into the crowd, and Eagleson is back there too. We all surround the TV on wheels now, trying to figure what the Commies are up to this time. Somehow, the score counts. The game is tied. THE SERIES IS TIED!!! Half a frame to play. No extra periods. That was the deal. Talk inevitably turns to the tie scenario.

“A tie’s a tie,” says Jimmy Vezina, “and it don’t matter what the Russians say.”

I had expected it. Expected it in the way of dread.

“I’d rather the Russians score than it end up in a tie,” I finally say very quietly and to myself. And then feel very bad about having said it.

Two minutes left. The old man I don’t know says we’ll win the rematch and this time we’ll have Bobby Hull and Sanderson too. Trudeau will see to that.

One minute left. Cournoyer is on the ice and a small boy’s hope has no bounds. We’re all on our feet now. Team Canada has it in enemy territory and things are moving fast as only last-minute hockey can. Cournoyer has the puck. “Cournoyer is my guy!” I yell. Everyone knows this.

Cournoyer blasts a shot. Henderson has a chance to redirect it but falls and crashes into the boards behind the net. But the puck gets past two Russian defensemen and finds the stick of Espo, who swats it toward the net. And now, from nowhere, is Henderson.

It’s just Henderson and Tretiak now. Everyone else alive watches. I feel like I’m choking. Henderson, so close to the Russian net minder, shoots but is denied. But then a second. And the rubber touches mesh.

Henderson has scored with 34 seconds remaining. The nation is in unbelief. The old come to their feet. The young go to the air.

Filed Under: A Fan's Notes, Hockey