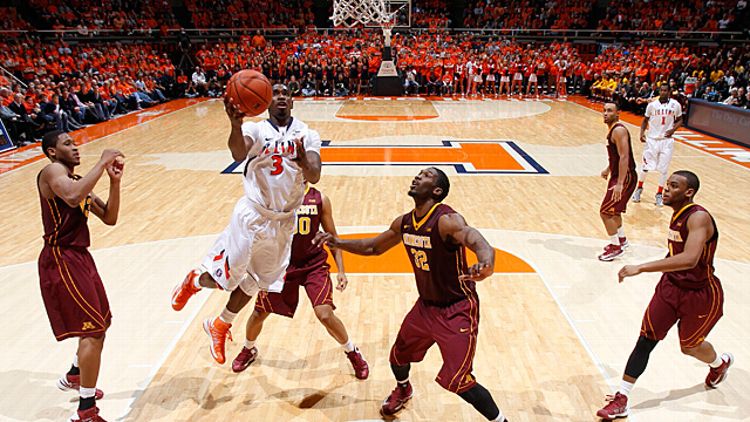 I’m a big believer in how brief moments can influence and often define outcomes, especially in sports. I freely admit there’s probably some kind of bias at play, and the best name for that bias might be “narrative.” At the same time, I hate the artificial stats/story dichotomy that’s emerged over the past … 15 years? More? Advanced statistics are an incredible method for adding dimension and contour to our understanding of players and games, and they easily co-exist with the idea that human beings making extraordinary (or extraordinarily poor) choices in critical moments can reverse foggier concepts like momentum and pave their own path to victory or defeat.

For example, we can look at the advanced statistics from no. 8 Minnesota’s impressive 84-67 road win over no. 12 Illinois last night, and it’s easy to see why they won. The Gophers’ offensive efficiency (points scored per 100 possessions) was 120, while Illinois’ was 95.7. The Gophers’ effective field goal percentage was 61.8, while Illinois’ was 37.7. Even the simple stats might be enough here; Joe Coleman scored 29 points on 10-for-16 shooting, a career high, Trevor Mbakwe scored 19 and grabbed 11 boards, Dre Hollins finished with 22-8-7, and the team hit nine 3’s to Illinois’ three — and Illinois attempts 3’s at the 16th-highest rate in the country. So the Gophers won by 17; it’s simple.

But it’s never quite that simple. Because one thing we know from the narrative side of things is that when you’re playing a good team on the road, a run is coming. A run is always coming. One of my favorite things about basketball, and sports in general, is that no matter how good the players get, they’re still influenced by an enemy crowd. We never get past that sense of — what would you call it? — Fear? Intimidation? Panic? Whatever it is, the added momentum of a wild crowd introduces an element of stress that’s like a wave, and the wave can make some strange things happen.

With 16 minutes left in the game, Minnesota found itself up 42-30. That’s when the wave started building. The Illinois guards, especially Tracy Abrams, began penetrating and making layups. The Illini crowd, silenced till then, started to get really, really loud. The usual wave-type things were happening; Minnesota’s reliable guards started turning it over, they couldn’t buy a bucket, and Tubby Smith tried a timeout that didn’t work. Suddenly, the lead was 4. We pick up the action at 44-40 with 12:56 remaining:

To me, that 1:16 of real time was “the moment.” That was when someone from Minnesota had to do something that would reassert their dominance and make it clear that the home team’s run would become an irrelevant footnote in the larger narrative of the game. Those two steals swung the momentum, the under-12 timeout gave everyone in the arena time to think of the opportunity they’d just missed, and Illinois never got closer than 44-42. The blowout was on.

But you could reduce “the moment” even further. After Joseph Bertrand’s shot fell (“this crowd is ready to roar”), bringing Illinois to 44-42, and Minnesota’s nervous Maurice Walker bobbled a pass and had his shot blocked, the home team brought the ball down the court with a chance to tie or take the lead. That’s when the wave could’ve peaked, sending everyone into delirium. And it was playing out perfectly; Tracy Abrams was streaking down the right side, and D.J. Richardson cut behind him to take position on the wing for a simple hand-off, after which he would’ve had an open 3 and a chance to bring the wave crashing down on the hands of Tubby’s Gophers.

But in the midst of that chaos — in the swirling center of the fear and stress and panic — Austin Hollins somehow saw it coming. At the 42-second mark of the video, you can see him start to recognize the pattern. He darts across court, bypasses the ball handler, and goes straight for Richardson. When Abrams turned around for what had looked like an easy pass a second earlier, Hollins was there to poach the pass. He gathered it, took two dribbles, threw a long pass downcourt, and before Illinois knew what was happening, Joe Coleman was jamming the ball and killing their rally.

You could tell it by the sound. The frenzied screaming changed to deflation (the steal) changed to silence (the dunk). That was “the moment.” And while Austin Hollins’s steal would’ve been remarkable under any circumstances, the composure and foresight he showed at the very moment when the wave was cresting crossed into another realm. When you’re getting that kind of leadership and situational awareness from a player who isn’t even a star, you might have a great team on your hands.