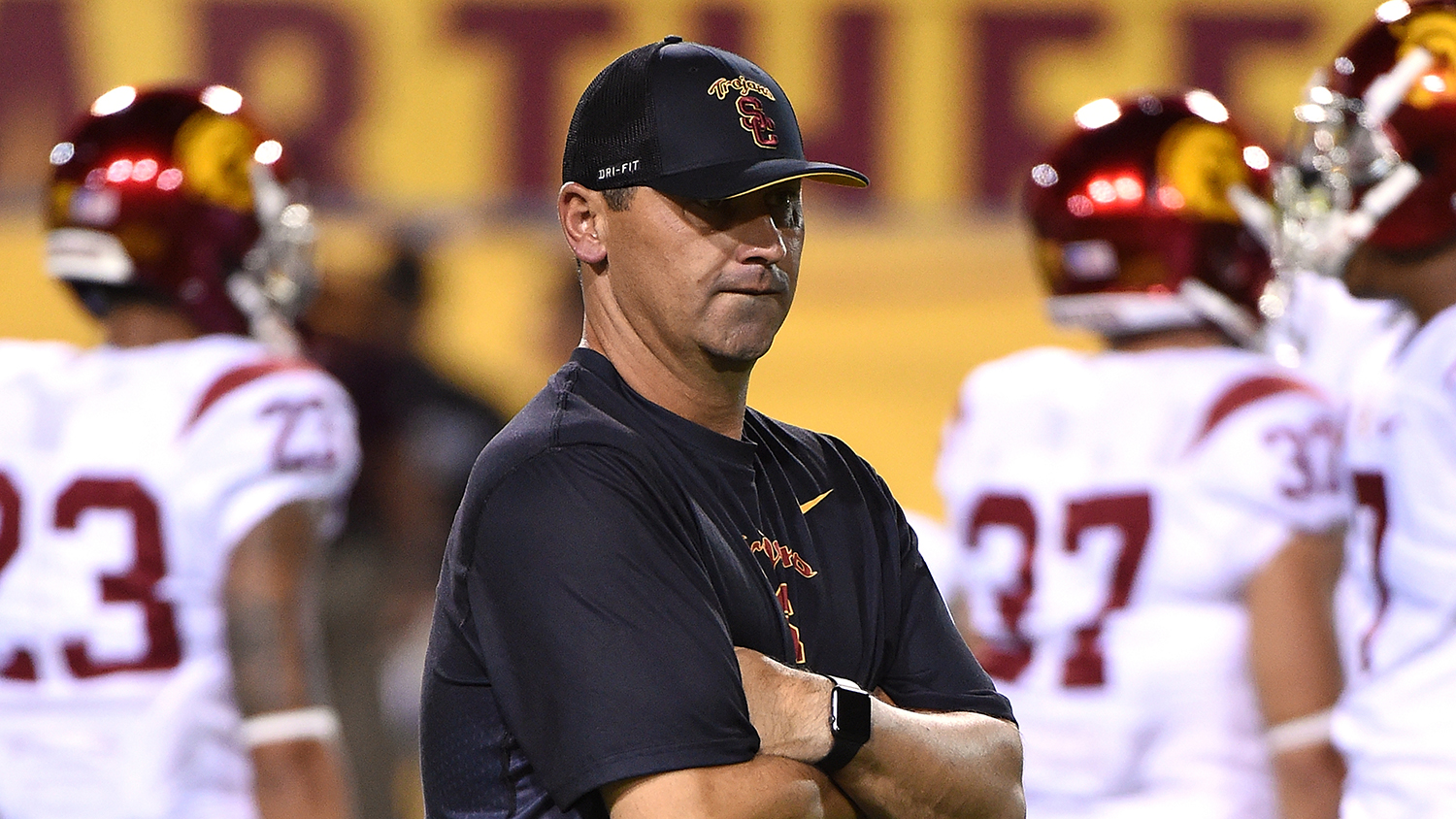 USC began the 2015 season the way it begins almost every season: with towering expectations. And last Thursday’s deflating 17-12 loss to Washington was made all the worse by the accompanying realization that — yet again — those expectations would not be met. The Trojans had already been bounced from the national conversation because of an unexpected loss to Stanford; with a second conference defeat, their chances of winning the Pac-12 were on life support barely one week into October, and patience with second-year coach Steve Sarkisian was already beginning to wear thin. Sarkisian left the field amid a chorus of boos from a crowd that had just endured back-to-back home losses for the first time since 2001. The media reaction on Friday morning was even harsher.

Despite the intensifying rhetoric, though, it’s safe to say no one saw the ending coming as quickly as it did. On Sunday morning, Sarkisian reportedly showed up intoxicated for USC’s practice. He wasn’t allowed onto the practice field following a team meeting, and he was immediately consigned to an “indefinite leave of absence” by athletic director Pat Haden, who followed through on Monday by making Sarkisian’s absence permanent. After just 18 games, Sark goes down as the shortest-lived full-time head coach at USC since Sam Barry came and went in 1941.

Although he didn’t specifically cite alcohol or substance abuse as the reason for his decision, Haden has addressed Sarkisian’s drinking in the past, and he told reporters on Sunday that “it was very clear to me that he is not healthy.” Other sources were more direct, including a USC player who told ESPN that Sarkisian “showed up lit to meetings again today.” SB Nation reported on Monday that Sarkisian has checked into rehab. Sarkisian has yet to issue a public statement.

As a portrait of a man in personal turmoil, the episode is stark. On top of the inherent professional pressure that comes with a gig like head coach at USC, Sarkisian is going through a divorce, and his problems with alcohol were already well documented. In August, he earned a reprimand from Haden and a small tsunami of ridicule for a drunken performance at a preseason pep rally (Sarkisian apologized but denied he had a problem, instead blaming the lapse on inadvertently mixing alcohol with medication). After Sunday’s debacle, the L.A. Times published an exhaustive report1 on Sarkisian’s drinking habits during his five-year stint as head coach at Washington, where he was reportedly recognized by his players as a regular on the local bar scene. More recently, another source told ESPN that Sarkisian’s staff suspected he was under the influence during USC’s 42-14 win at Arizona State on September 26.

The implications of a midseason coaching change seem especially bleak in light of the Trojans’ recent history. USC has been in a near-constant state of flux for more than five years, beginning with Pete Carroll’s departure for the NFL in early 2010 and the heavy-handed NCAA sanctions that followed that summer. Lane Kiffin never gained much traction, blew a preseason no. 1 ranking in 2012, and got the boot barely a month into the 2013 campaign.

When the Trojans take the field this weekend at Notre Dame, interim coach Clay Helton (promoted from offensive coordinator) will be the fourth different head coach to lead them against the Fighting Irish in as many years. If they make a bowl game — hardly a guarantee, with four currently ranked opponents looming over the last seven games — at the end of this season, some upperclassmen will have played almost as many games in the past three years under interim coaches (17 games under Helton and Ed Orgeron) as they have under the ostensible full-timers (23 games under Kiffin and Sarkisian). Largely because of that track record, Haden’s future as AD is in considerable doubt as well.

If anything is certain about the future of USC football beyond Thanksgiving, it’s that whoever follows Sarkisian on a full-time basis will mark a deliberate departure from the attempt to re-create the Carroll era with former Carroll assistants. Both Sarkisian and Kiffin spent time on staff during the halcyon Leinart/Bush teams that produced two national championships and an epic 34-game winning streak from 2003 to 2005, and both returned to L.A. on an implicit mission to resurrect the aura of those years. The reality is, that period is so far in the past now that it’s getting the documentary treatment. To recruits born in the late ’90s, Trojans football means an occasional big win, a lot of unexpected losses, and an annual reservation in the Holiday or Las Vegas Bowl.

For a program that continues to attract blue-chip talent as a matter of course, it shouldn’t be that way. For all of its failures, USC remains one of the handful of elite destination jobs in football that all coaches strive for. According to 247Sports’s composite recruiting rankings, five of USC’s last six recruiting classes have ranked in the top 10, including a composite no. 2 class this year that surpassed Alabama’s as the best incoming crop in the nation according to several outlets. Nearly every player on the two-deep roster arrived as a four- or five-star prospect, and the easing of scholarship restrictions has left room for more as the sanctions-ravaged classes of 2012-13 begin to age out.

But the talent has always been there — from the abrupt end of Carroll’s tenure through Sarkisian’s sad exit on Sunday, it’s been the one constant. USC always has players, which is the main reason the job looks so promising and every year (on paper, at least) looks like a prospective return to glory. All the pieces are always in place, the stage is perennially set. It should be clear by now, though, that the product will never live up to the stage until the Trojans stop looking through their old yearbooks and make a serious run at landing a coach big enough to fill the position.

Longing for the Old-School Waiver Draft