The Stanford Defense vs. Everett Golson: The Key Battle to Watch 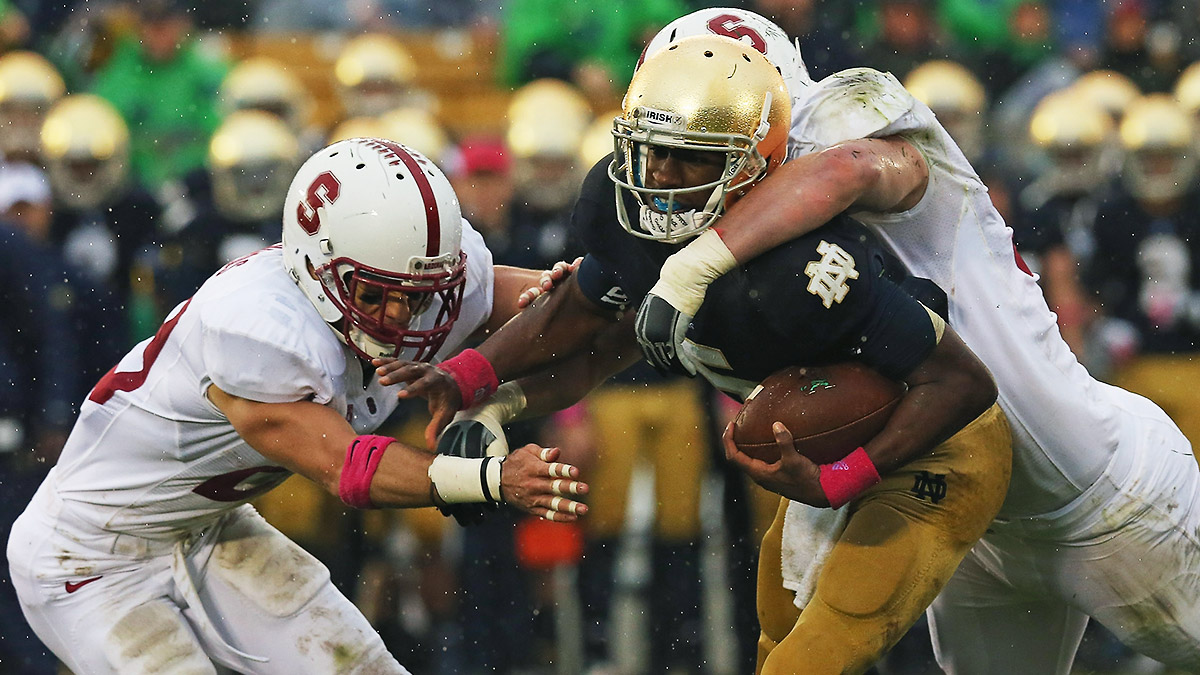 A month ago, on the heels of Notre Dame’s season-opening win over Rice, I wrote about Everett Golson’s game according to the usual template. I played up his elusiveness (“his mobility is a defining asset”) and his relatively diminutive frame, while assuring readers that “no one is ever going mistake him for a statuesque pocket passer.” I made an obligatory nod to Tony Rice, the go-to comparison for any Irish quarterback labeled “dual threat” or “athlete.” Frankly, though, there wasn’t much to assess. At that point, what we knew about Golson as a quarterback was what we could discern from the 2014 opener and his 11 starting assignments as a redshirt freshman in 2012, when he went along for the ride opposite the stingiest defense in the nation. He did just enough to get that team to the BCS title game, and not much more. After a season-long suspension last year, how would he fare in 2014?

In the ensuing weeks, Golson has made it abundantly clear he has no plans to be confined to the role of “scrambler,” or “caretaker,” or any other euphemism that suggests he’s unable or unwilling to challenge defenses with his arm. Against Michigan, he attempted more passes (34) than he had in all but one regular-season game in 2012, connecting for three touchdowns with no interceptions in a 31-0 rout. The following week, against Purdue, he put the ball in the air 40 times with two more scores in a 30-14 cruise. Last week, Golson set career highs against Syracuse for completions (32), passing yards (362), and touchdowns (4), including a 72-yard bomb that put to bed any lingering doubts about his arm strength. Notre Dame won, 31-15, and despite a couple of uncharacteristic interceptions, its quarterback looked like the complete package.

Unloading on the likes of Purdue and Syracuse is one thing, but making hay this weekend against no. 14 Stanford will be a test of an entirely different magnitude. The Cardinal will arrive in South Bend boasting the most suffocating secondary in the nation, one that ranks no. 1 nationally in passing yards allowed per game and per attempt, no. 5 in pass efficiency defense, and no. 3 in Passing Defense S&P+. While the raw yardage statistics are skewed by a game against Army and its notoriously pass-averse option scheme,1 Stanford has also clamped down on the blue-chip end of its schedule, holding USC to 15-of-22 passing for 135 yards and Washington to 15-of-29 for 98 yards. The Trojans and Huskies combined for two offensive touchdowns against the Cardinal, 11 passing first downs, and two completions that covered at least 20 yards. Stanford has yet to allow a pass of 30 yards or more.

The aforementioned secondary deserves a lion’s share of the credit for that success: Starting corners Wayne Lyons and Alex Carter and strong safety Jordan Richards have 81 career starts under their belts and likely NFL careers in front of them. Still, with Stanford the story always begins up front, and the current front seven has been no exception: Even in the absence of three first-team All-Pac-12 picks from 2013 (Ben Gardner, Trent Murphy, and Shayne Skov), the Cardinal have kept the heat on opposing quarterbacks, registering two sacks and three QB hurries against USC’s Cody Kessler and dropping Washington’s Cyler Miles four times. Three of the sacks on Miles were credited to a redshirt freshman, Peter Kalambayi, who has yet to start a game but was just awarded the Pac-12’s Defensive Player of the Week honors for his efforts against the Huskies. When he does see the field, Kalambayi occupies the pass-rushing outside linebacker position vacated by Murphy, who was a consensus All-American last year, and the freshman is well on his way to wreaking the same kind of havoc in opposing backfields.

Like all defenses, Stanford’s pass rush hinges mainly on winning one-on-one matchups. But it can influence those matchups with its alignment and post-snap movement along the front line. On Kalambayi’s first sack of the season, against USC, the Cardinal lined up in a 3-3-5 nickel set with Kalambayi stationed at the top of the formation as a stand-up end/OLB. (This formation is what Stanford calls its “Big Nickel,” wherein no. 10, Zach Hoffpauir, serves as a hybrid safety/linebacker. This personnel group gives the defense a lot of options in terms of alignment and potential blitzes.) Because this was second-and-20, an obvious passing down, there wasn’t much pretense of a run rush — the Cardinal were going after the quarterback. 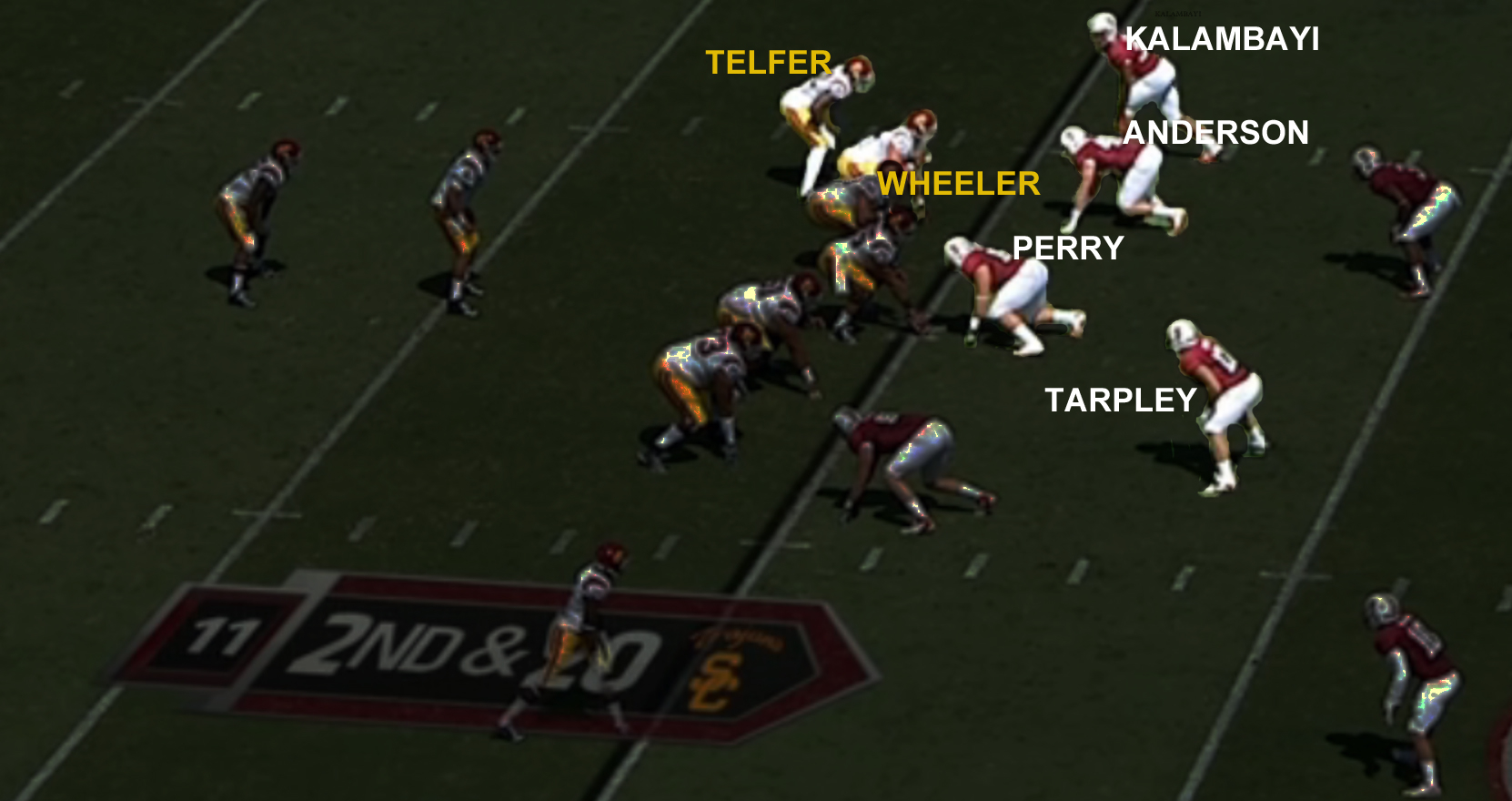 For some reason, USC went with a play-action pass here, complete with a pulling left guard, even though a run made little sense given the down-and-distance. Stanford linebacker A.J. Tarpley (no. 17) reacted to the run action, but no one else on the line bit. Instead, they ran a twist: The nose tackle, David Parry, charged hard to the left side of the Trojans offensive line, occupying center Max Tuerk (no. 75), while defensive end Kevin Anderson looped behind him into the middle of the line. Kalambayi, on the outside, rushed straight upfield. 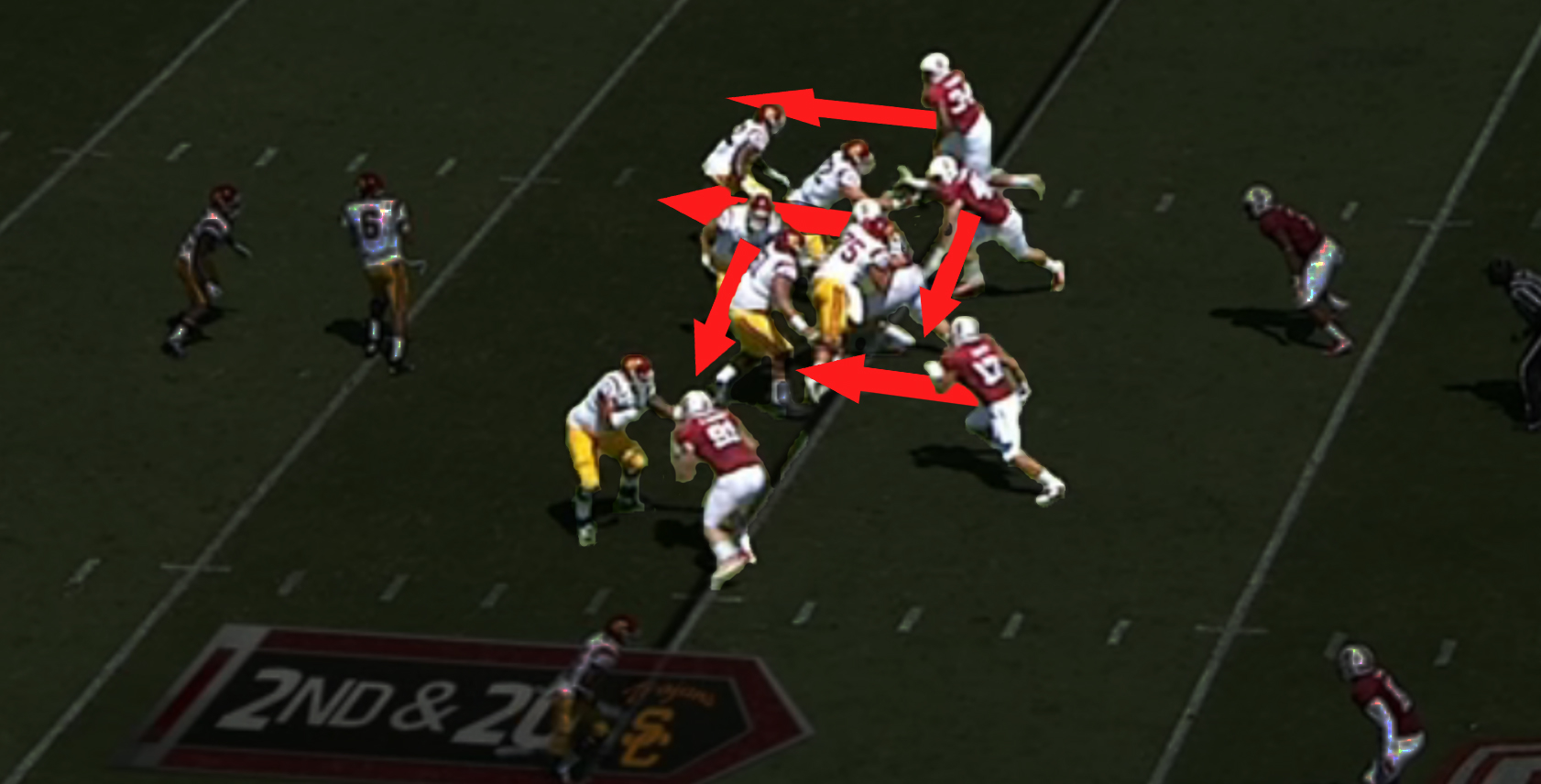 The Trojans’ fate was sealed as soon as left tackle Chad Wheeler opted to block down Anderson’s twist to the inside, leaving Kalambayi one-on-one with tight end Randall Telfer (no. 82). 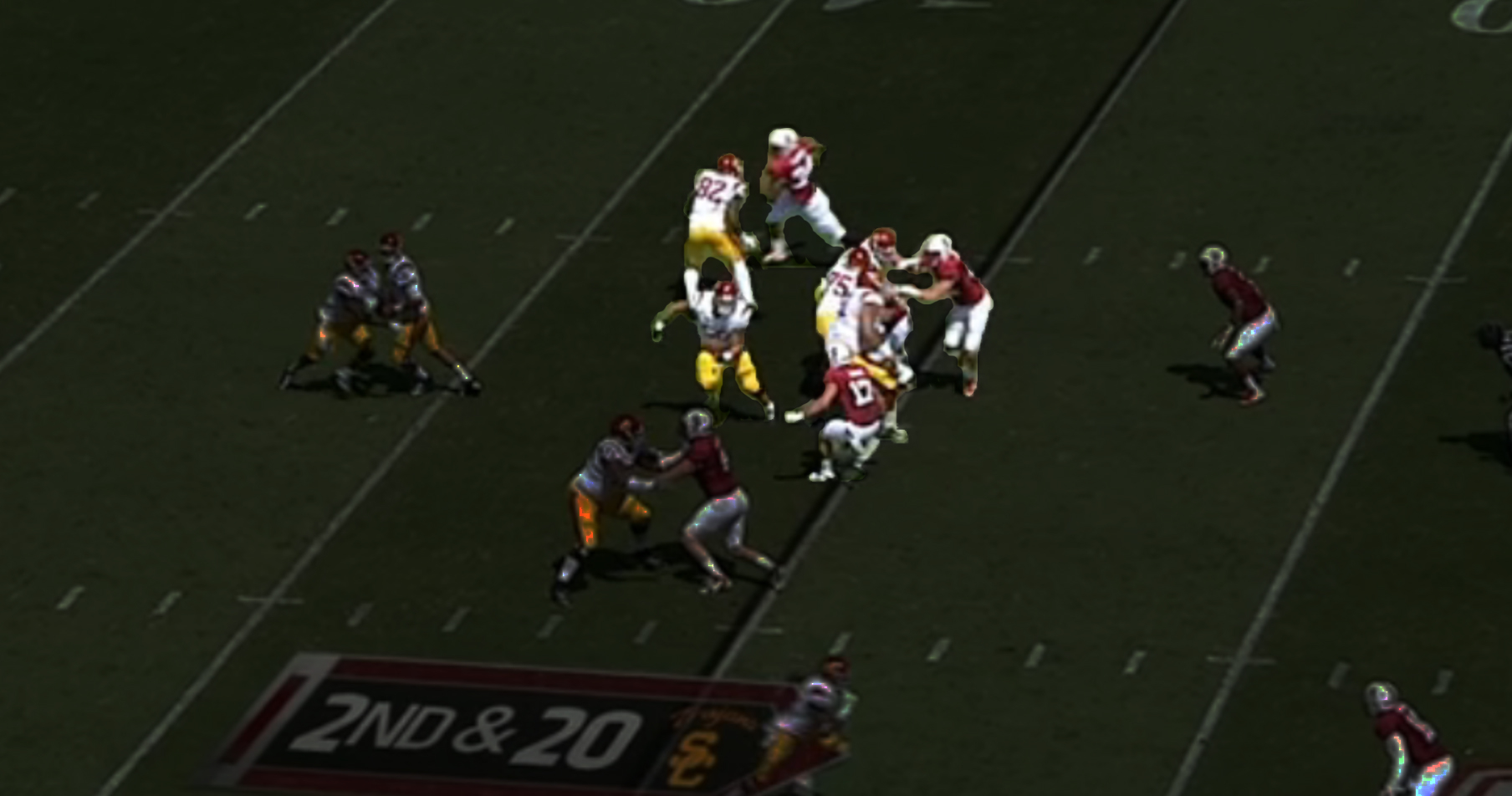 On the chalkboard, this protection is fine: Although Wheeler effectively blocked no one (Anderson was eventually picked up by the right guard, no. 51 Damien Mama, and never crossed the line of scrimmage), all five Stanford rushers were accounted for, including Tarpley, who was neutralized by the play-action.

As it actually unfolded, however, the lonely tight end was helpless against Kalambayi, who immediately threw Telfer aside with a left-handed swat …

… and took full advantage of his free run at Kessler.

Unlike Golson, Kessler was not a serious threat to hurt the Cardinal with his legs, but the same twist that created the pressure on that play can also be an effective containment policy against quarterbacks who aren’t sitting ducks. On another play, against Washington, Stanford lined up in a similar formation to the 3-3-5 diagrammed above, in this case with Anderson in the stand-up outside linebacker position. Again, at the snap, Anderson twisted to the inside as Stanford’s interior linemen looked to generate a rush on the left side of Washington’s offensive line.

As he finished his drop-back, Huskies quarterback Miles saw the red seas part where Parry had vacated his position in the middle of the line — an open invitation for him to tuck and run to daylight. Meanwhile, Anderson was biding his time, not yet revealing himself as the designated spy in case Miles opted to do just that.

When Miles did decide to take off, he found the wide-open lane immediately occupied by Anderson, who’d been ignored by the offensive line.

Because Miles is a superior athlete, he was able to create enough space to remain on his feet despite Anderson’s diving attempt to bring him down in the open field …

… but by the time he spun out of Anderson’s grip, Miles was subsequently swarmed by Parry and James Vaughters (no. 9), who was officially credited with the sack. But the play was really made by the design, which misled the quarterback into seeing something that wasn’t really there.

In both of these examples, Stanford was able to generate pressure and ultimately record a sack with only four rushers, and without asking anyone to single-handedly obliterate an opposing lineman to get home. Whether Kalambayi can remain the dominant presence he was at Washington on a consistent basis is an open question, but if Stanford replicates the above feats on Saturday at Notre Dame, Golson’s emerging reputation as a passer is unlikely to survive the weekend.

Golson’s last performance against Stanford, in 2012, was rough: He finished just 12-of-24 for 141 yards (5.9 yards per attempt) and was forced out late in the fourth quarter with a concussion; it was left up to backup Tommy Rees to supply the winning touchdown in overtime.2 From what we’ve seen in 2014, Golson is a much steadier, more mature passer than he was two years ago, and seems to have found a legitimate big-play threat in sophomore William Fuller.

As impressive as Golson has been, though, and as successful as he was last week, the play that stood out to me in the context of this article wasn’t the 72-yard bomb, or any of Golson’s other three touchdown passes; it was the only sack the Irish allowed, on which Golson was obliterated:

The line held up for the rest of the game, but I can only imagine the reaction of Stanford’s defensive coaches when they saw how Notre Dame dealt with (or failed to deal with) that particular blitz. And while Syracuse didn’t drop Golson again, Purdue got to him four times a couple of weeks before.

Golson is vastly improved, and there’s every reason to believe he can take the Irish back to the top of the polls. But his line will need to give him time to prove it. Stanford is the best defense by far that the Irish have faced, or that they’re likely to face, even with trips to Florida State and USC on deck. That makes Saturday a crucial test not only for Golson’s evolution as a quarterback, but also the first real gauge of 4-0, top-10 Notre Dame’s playoff potential, or lack thereof.